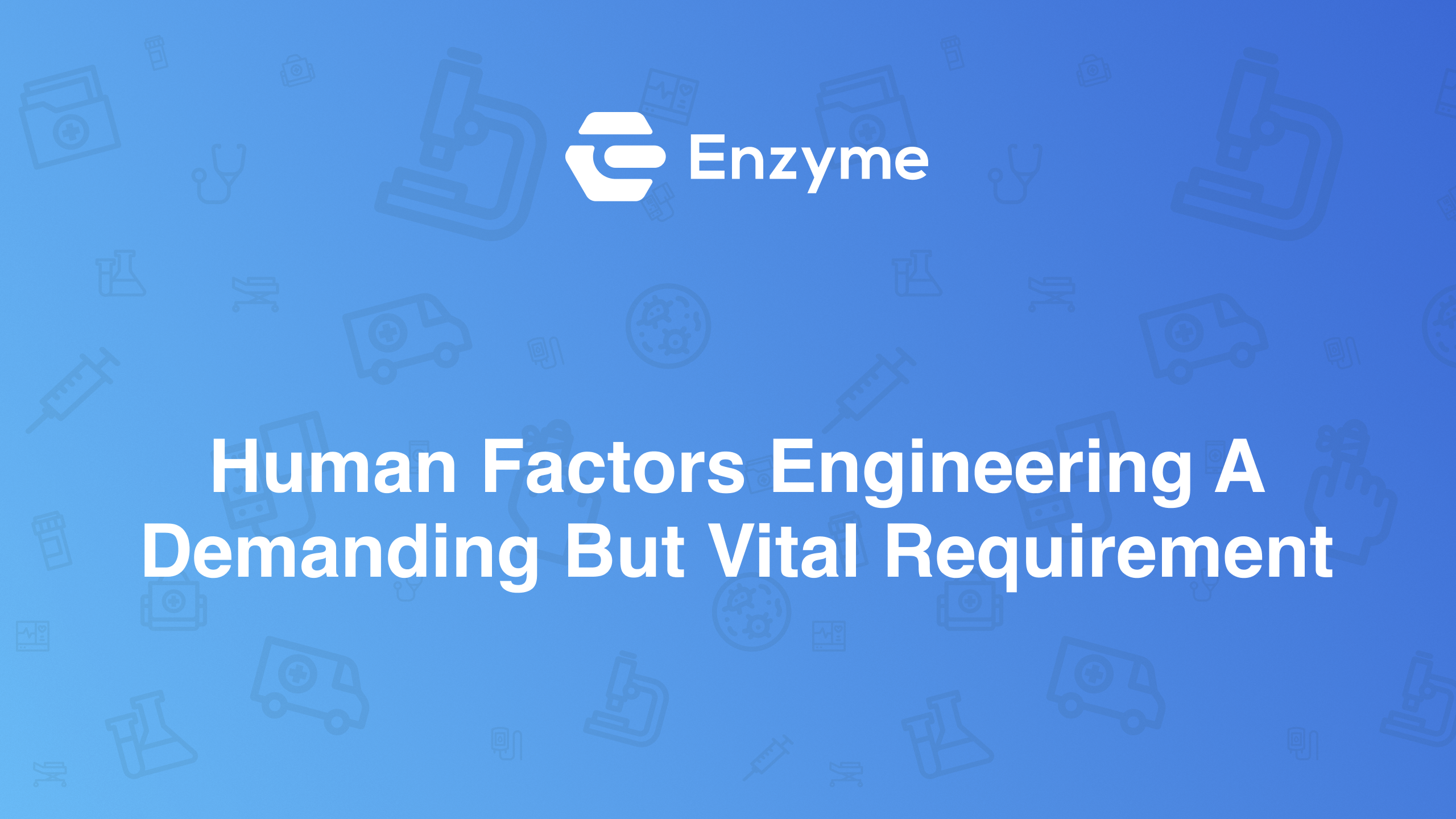 Human factors engineering (HFE) has become a much more salient regulatory consideration in the age of wearable digital devices, but HFE is relevant for infusion pumps and radiology systems as well. A recent FDA guidance on the subject provides some crucial insights into the agency’s expectations for premarket submissions, but appropriate planning in the early stages of product development can go a long way toward making HFE an asset in development of products well into the future as well as products on the immediate horizon.

New Terms, Definitions to be Appended to Existing Guidance

Included in this new HFE premarket contents draft is a list of 20 definitions, some of which will supersede Section 3 of the 2016 guidance. Perhaps the most important of these is the term “critical task,” which is a user task which may cause serious harm to the patient or user if performed incorrectly or not performed at all. Compromised medical care is one of the potential harms that may result from a failure to perform a critical task, which the 2016 premarket submissions guidance states should be identified by means of an empirical analysis.

These empirical analyses can be conducted with the help of:

There are several other terms and definitions in the HFE premarket contents draft that are important to bear in mind during product development. The term “abnormal use” is defined as an intentional act or intentional omission of an act that reflects violative or reckless use or sabotage of the device.

Such use would be beyond reasonable efforts at risk mitigation or control by the design of the user interface, while the term “use error” describes user action or lack of action that differed from the action (or inaction) anticipated by the developer. The 2016 guidance has several specific recommendations regarding use errors, including that the user interface be designed to reduce or eliminate the possibility that such errors may cause harm to the user or degrade medical treatment.

This approach to risk management may seem to suggest that ISO 14971 is an applicable standard, but the 2016 guidance states that use error is not readily captured by the probabilistic nature of risk characterized by the ISO standard. This is not the only instance in which the FDA has made note of the limitations of ISO 14971 as a risk management tool (see here and here), but in the case of HFE, the central issue is that many use errors are difficult or impossible to anticipate prior to simulated use of a more or less finished product.

The consequent need to use device design to reduce or eliminate the risks of use error is particularly critical when a device is being modified as part of a corrective and preventive action (CAPA). In that scenario, the 2016 guidance recommends that the developer use the usual methods of validating the design, although the evaluation of the interface might be enhanced by allowing a test user to compare the new and the previous versions of the interface.

When this is the case, the test administrator might explain the known problems with the previous version to the test user and ask the participant whether the new design is an improvement, as well as whether the changes might prevent the use errors seen in the previous version. One of the more helpful features of the 2016 guidance is that it allows the developer to make use of information drawn from previous versions of the device in question and/or similar devices made by other manufacturers to clarify any known use-related problems.

One of the hazards of device design is that the interface may confound the expectations of the user. The 2016 guidance offers the example of the use of a knob that increases the flow rate of a liquid or gaseous substance when turned in a direction that a user might expect would decrease the flow rate. This applies as well to virtual versions of a knob, so the design team must clearly understand what sort of expectations potential users might have regarding the elements of the user interface.

This new HFE content draft guidance provides three submission categories of human factors information to be filed with a premarket submission, depending on the results of a critical task analysis of the design of the interface. These three categories are:

This submission categories framework is essentially a risk-based assessment of the changes to critical tasks created by the interface, but this risk framework would presumably operate entirely independently of the risks associated with the device itself. The draft provides a flowchart to assist the developer in determining which of these three submission categories applies to a device.

It is important to note that any clinical studies of the device would have to enroll a minimum of 15 participants per the 2016 guidance, although the number could be multiplied by the number of distinct user populations. A user population is defined in the 2016 guidance as groups whose characteristics could affect their interaction with the device (such as by age) or as groups whose level of experience with medical devices generally could affect their ability to properly operate the device (health care professionals versus lay users/patients).

The HFE content draft applies to 510(k) filings, de novo petitions, PMAs, PMA supplements, and humanitarian device exemptions, but for obvious reasons excludes investigational device exemptions (IDEs). One key consideration to bear in mind is that the terms of the final version of this guidance will go into force within 60 days of issuance, and any applications the FDA receives within that 60-day window will not be required to comply with the HFE content guidance.

However, the requirements of the 2016 HFE guidance will nonetheless apply to IDEs, so a developer’s records will have to document all the HFE assessment and/or validation work done on the device, regardless of whether that information must be included in the premarket submission. This is a tremendously important draft guidance, and so we at Enzyme would urge developers to make their opinions known to the FDA by the end date of the comment period, which is March 9.