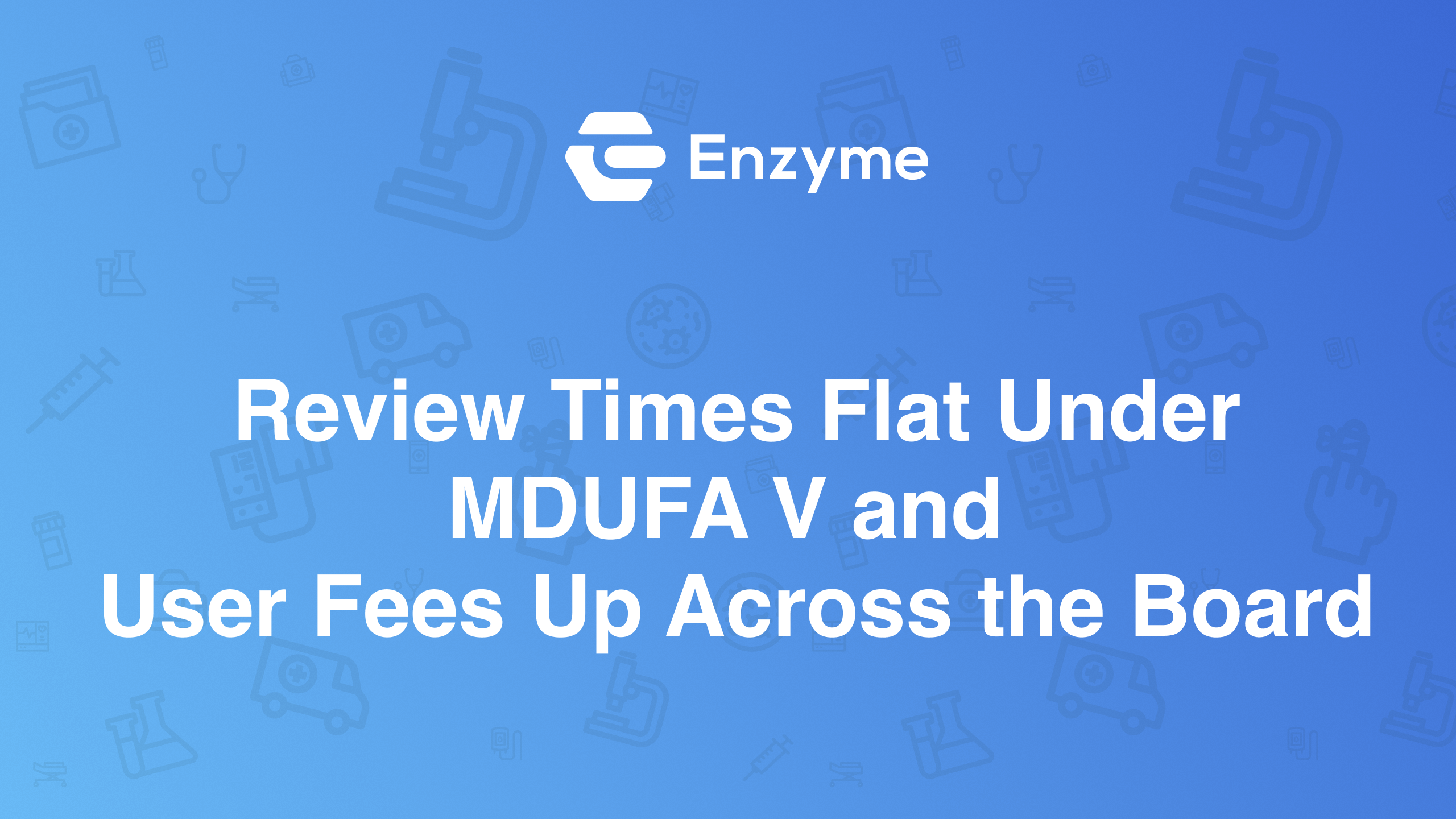 Review Times Flat Under MDUFA V, and User Fees Up Across the Board

Enzyme Team
-
November 2, 2022
The Folks Behind the Brand

The FDA has entered into a new user fee agreement with developers and manufacturers of medical devices, which requires substantially larger sums for premarket applications of all types. Many in industry may be dismayed to discover that premarket review times will be largely unchanged compared to the previous user fee agreement, raising a question of whether the additional user fees represent a value-added proposition.

We at Enzyme don’t routinely delve into the question of FDA user fees and review times, but the increase in fees under the fifth Medical Device User Fee Agreement, or MDUFA V, is conspicuous enough to prompt a review here at our blog. The most impactful change in user fees may be the increase in fees for 510(k) filings for small entities, which are companies that gross less than $100 million per year. That fee has risen from $3,186 in fiscal year 2022 to $4,967 in FY 2023, an increase of more than 50% in a single fiscal year.

The FDA assumes it will receive full fee amounts for 29 PMAs and another seven small-entity PMAs in 2023, for a total of approximately $13.6 million in the first fiscal year of MDUFA V. The estimated volume of 510(k) filings by large entities in FY 2023 is 2,088, with another 1,695 filed by small entities, which would yield approximately $50 million for these class II device filings.

A total of 60 de novo petitions are expected for FY 2023, with 43 of those emerging from entities grossing less than $100 million per year. According to the FDA’s estimates, it should take in $3.7 million in fees for de novo petitions in FY 2023. All told, the FDA anticipates it will gather nearly $331 million in user fees in FY 2023, which includes fees for establishment registration, supplemental premarket filings, periodic reporting, and requests for device risk class information.

Despite these significant increases in fees, the FDA’s performance goals for these premarket reviews remain largely the same under MDUFA V as under the previous user fee agreement. The table below lists some of the information on expected responses to regulatory filings. These user fee agreements are based on an expected percentage of applications that are processed within a specific number of days.

The FDA review times for these premarket submissions typically include a review phase during which the agency will determine whether the filing is acceptable. For 510(k) applications, this review must be completed within 15 days, at which point the FDA clock is halted if the agency requires additional information from the applicant to meet the terms of the FDA’s refuse-to-accept policy for 510(k) applications.

Applications for a grant of de novo petition are subject to a deadline for response to FDA requests for additional information. The FDA may request additional information that is not suitable for the interactive review process for de novo petitions, and the applicant has 180 days to provide that information before the FDA deems the petition withdrawn. Similarly, PMA applications may be subject to a major deficiency letter, which leaves the applicant with 360 calendar days to respond before the application is considered to have been withdrawn.

The fifth device user fee is just underway, but we would be remiss if we didn’t point out that the total volume of user fees has increased significantly with each agreement. MDUFA III was expected to yield the FDA a total of $595 million, while MDUFA IV was calculated at approximately $1 billion. MDUFA V will generate $1.78 billion at a minimum and as much as $1.9 billion should the agency meet all the performance metrics included in this agreement. Developers and manufacturers might do well to assume that the next user fee agreement will bring a new round of fee increases for these regulatory filings if the changes over the past couple of user fee cycles are any indication.