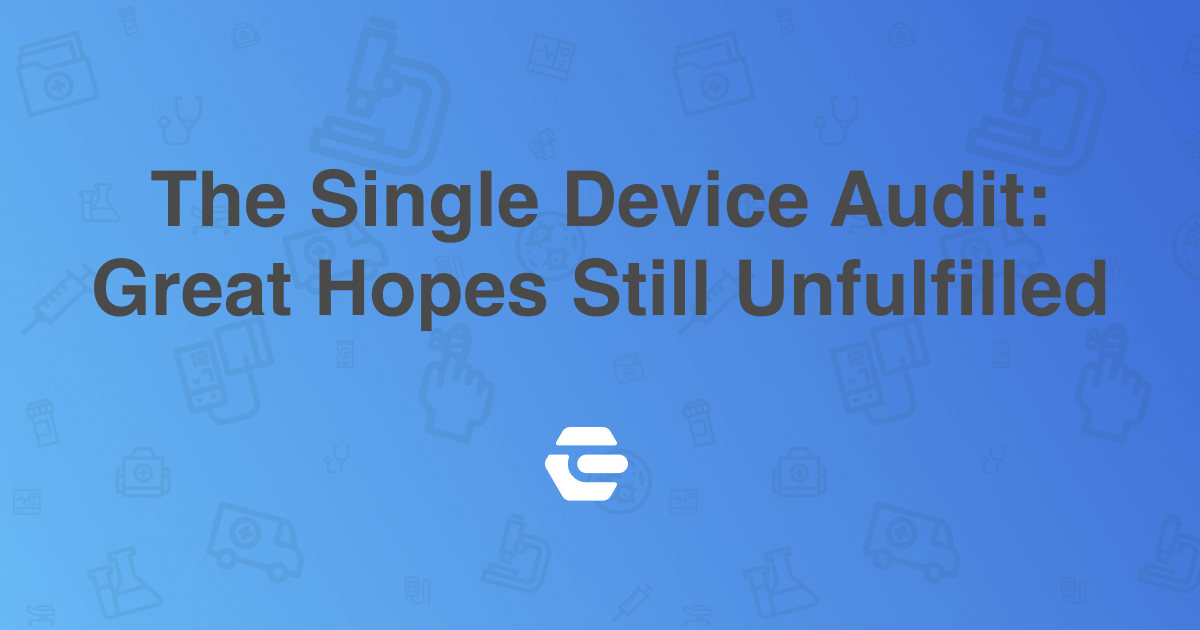 Regulatory harmonization is still pertinent despite the ongoing COVID-19 pandemic, but one of the centerpieces of that ambition, the Medical Device Single Audit Program (MDSAP), was struggling to gain traction before the pandemic.

Regulatory harmonization is still pertinent despite the ongoing COVID-19 pandemic, but one of the centerpieces of that ambition, the Medical Device Single Audit Program (MDSAP), was struggling to gain traction before the pandemic. This program holds tremendous promise for both regulators and industry, but there is a very large missing piece to this regulatory jigsaw puzzle, the European Union (EU).

The MDSAP, sponsored by the International Medical Device Regulators Forum (IMDRF), is not the first attempt at third-party inspections, a concept the U.S. FDA has been exploring for some time. One of the conceptual antecedents to the MDSAP was a mutual recognition agreement undertaken in the closing months of the 20th Century between the FDA and the European Medicines Agency (EMA). The scope of this program did not include medical device facilities, but was followed by a third-party inspection program undertaken by the FDA after the first device user fee agreement was forged in 2002. Industry has had questions about whether the FDA would selectively accept the results of those inspections, but eighteen years later, 10 organizations are accredited by the FDA to conduct third-party inspections.

Subsequently, the FDA and Health Canada undertook an agreement for inspections under the Canadian Medical Devices Conformity Assessment System (CMDCAS). Health Canada completed its switch to the MDSAP program in 2019, however, bringing an end to CMDCAS as an inspectional regime. As is the case with MDSAP, CMDCAS relied on ISO 13485 as the standard for quality systems management. Health Canada officially adopted ISO 13485 in 2016, although the transition period from the 2003 edition to the 2016 edition of 13485 was still ongoing and would not be completed until March 2019.

The EMA is at present merely an official observer of the MDSAP, a status which represents a severe rate-limiting factor on the utility of the program, and one that will have to be resolved if a mature single audit program is to be realized. One possible source of drag on EU participation is that the EMA’s transition to the new Medical Device Regulations has been postponed by a year to May 2021, thanks to the COVID-19 pandemic.

The scope of the MDSAP agreement currently does not include in vitro diagnostics (IVDs), which seems to run parallel to the fact that the EMA is still transitioning toward the new In Vitro Diagnostic Regulation, a process that will not be completed until May 2022. IMDRF has, however, formed a working group (WG) to address IVD regulations. This WG has posted a draft risk framework for IVD classification, with a comment period that closes July 25, 2020.

Previously, the IVD WG had posted an IVD version of the pilot program for the regulated products Table of Contents (ToC) program at IMDRF, part of a set of developments affirming that the regulatory community is keen to bring IVD regulation up to speed. The ToC pilot is designed to evaluate whether a common premarket submission format could lower some of the hurdles on devices that are destined for multiple markets.

There are still only five primary participating members in MDSAP, according to the FDA, which is a member along with Australia’s Therapeutic Goods Administration (TGA) and Health Canada (HC). Japan’s Pharmaceuticals and Medical Devices Agency (PMDA) and Brazil’s Agência Nacional de Vigilância Sanitária (ANVISA) round out the list of five primary members, although the World Health Organization has joined the EU as an official observer. The competent authorities in Argentina and South Korea are listed as affiliate members.

Despite the EU’s tepid response to MDSAP, the Medical Devices Coordination Group said recently that MDSAP audits could be used in lieu of regular audits during the pandemic, so long as the inspected site has procedures for MDSAP audits. The scope of this policy is limited, covering surveillance and recertification audits, among others.

From Single Audits to Single Reviews

The near-term future of the MDSAP program is difficult to chart if only because of the number of variables, which includes combination devices. The FDA recently indicated that its inspection regime for drug- and device-led combination products is not especially amenable to third-party or MDSAP inspections, a policy stance which, if replicated in other jurisdictions, would seem to limit the utility of the MDSAP. Still, a common inspectional regime was on the agenda for the IMDRF’s antecedent organization, the Global Harmonization Task Force, and the FDA’s ongoing shift away from Part 820 to ISO 13485 makes clear that the largest player in the regulatory game is intent on making MDSAP a viable program.

As ambitious as it is, the MDSAP is perhaps overshadowed in aspirational terms by the Medical Device Single Review Program (MDSRP), development of which seems dependent on completion of a fairly stable and widely accepted MDSAP. The FDA had committed in 2015 to take part in the pilot program for the ToC program at IMDRF, and HC said in August 2018 that it would adopt the ToC framework for applications for class III and IV devices.

In the interim, HC has completed some of the preliminary work toward use of the ToC, consisting of a consolidation of HC and IMDRF guidance into a new set of tools and guidance pages. In a similar vein, the FDA recently posted the final version of a guidance for third-party review of relatively low risk class II devices under the 510(k) program, which stipulates that the third party be conversant in IMDRF programs, including MDSAP.

While it may be a stretch to argue that the broadly demonstrated interest in MDSRP ensures that MDSAP will succeed, it might also seem implausible that the MDSAP will simply die on the vine. Mainland China has given indications of interest in an international regulatory regime as demonstrated by its participation in the IMDRF working group on clinical evaluation reports. Should either Beijing or Brussels dive head first into the IMDRF waters as full members, other national and international groups may feel compelled to respond in kind, lest they find themselves increasingly on the outside of a global med tech marketplace, a marketplace that is filled with items that are critical to the well-being of their people.

Next up: making MDSAP work for you