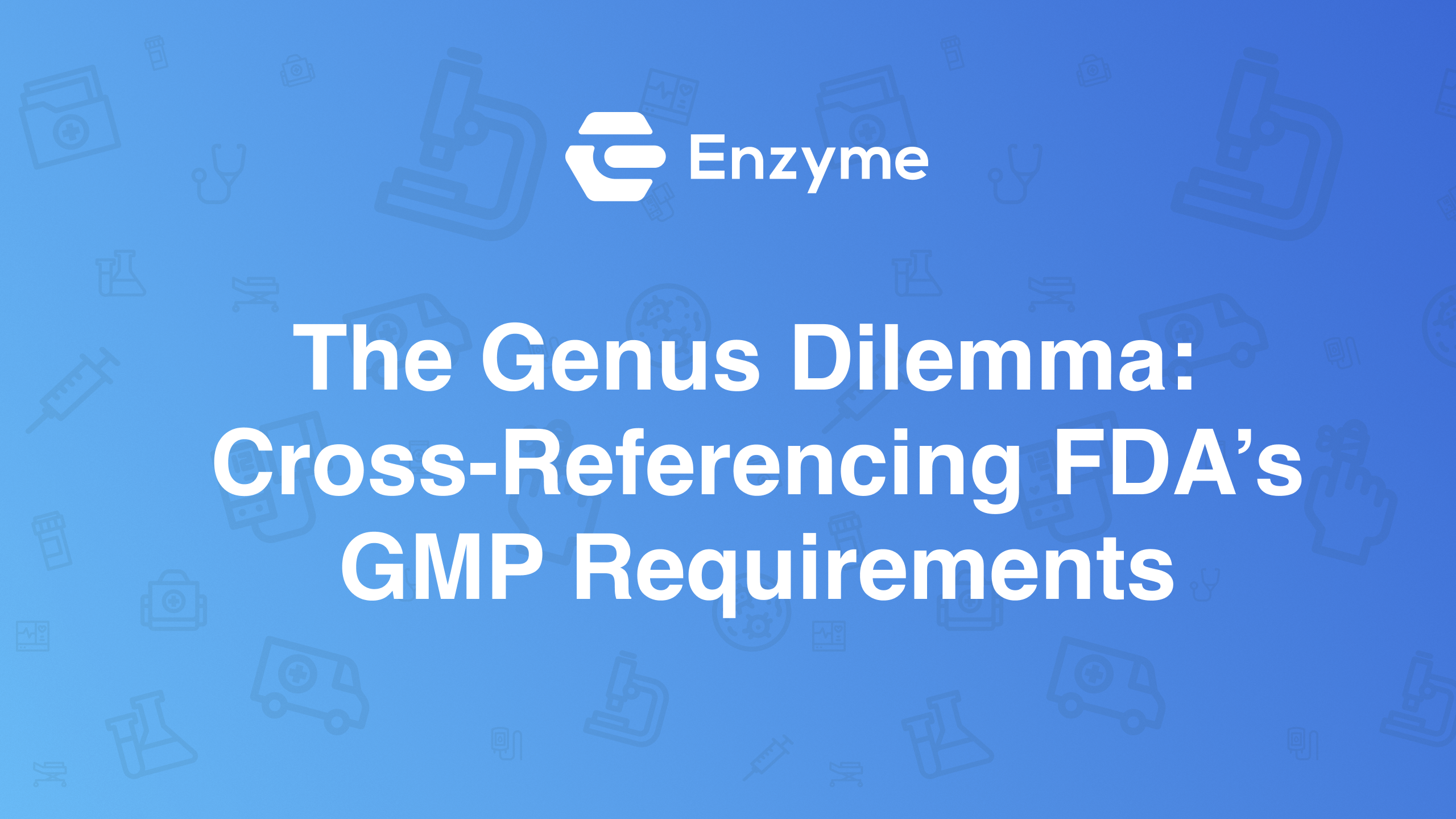 Enzyme Team
-
February 2, 2022
The Folks Behind the Brand

The FDA’s loss in federal court to Genus Medical Technologies Inc., has forced the agency to seek feedback on the transition of a number of product types from drugs to devices, a process that promises to be complicated. One of the key considerations in that transition is that while there is substantial overlap between the good manufacturing practice (GMP) regulations for drugs and devices, there are some elements unique to each, a fact which suggests that these transitions could prove expensive and cumbersome.

The April 16, 2021, decision in the U.S. Court of Appeals for the District of Columbia forced the agency to open a docket in response to a case in which Genus sued the agency to have the company’s barium sulfate product regulated as a device rather than a drug. This was not the first case in which the FDA and industry had squared off over product jurisdiction, but not all these lawsuits yield the desired result, as the resolution of the case of Prevor v. FDA demonstrates.

The FDA requested feedback on how it should approach the problem in August 2021, stating that it had decided not to appeal the decision. The preamble points to the 1997 case of Bracco Diagnostics Inc. v. Shalala as an example of the need to consistently regulate a given category of products, a point the agency had emphasized in litigation with Genus. There are several key elements in Part 211 of the Code of Federal Regulations (CFR) that will not translate neatly to device regulations, however. Among the provisions of Part 211 that are likely to prove difficult are:

This dilemma was highlighted in comments by one of the medical technology trade associations, which stated that there is no exact parallel for calculation of drug manufacturing yield in the Quality System Regulation (QSR). The Advanced Medical Technology Association (AdvaMed) urged the FDA to consider a grandfathering mechanism that would apply to products manufactured at sites with a demonstrated compliance history. This grandfathering policy would spell out the conditions under which the manufacturer would have to requalify the manufacturing process, an approach AdvaMed said would prevent shortages.

One of the unintended consequences of Genus is that combination products could be affected. This point was raised by the Pharmaceutical Research and Manufacturers of America (PhRMA), which stated that several products, such as eye cups and droppers, are regulated as drugs under Part 200.50 when co-packaged with the ophthalmic drug for administration. PhRMA said these items and the associated drugs might be more appropriately regulated under Part 4, although this approach may be more complicated than is immediately apparent.

For instance, Part 4.3 states that the components of any such product are subject to the requirements for those components as though they were stand-alone products (Part 820 for the device component, Parts 210 and 211 for the drug product). Similarly, the biologic component of any combination products that include a biologic would be subject to the related requirements. PhRMA also stated that the fact that a drug is packaged with containers that are ancillary to administration does not suggest that the drug product in question should be regulated as part of a combination product. The distinguishing feature in PhRMA’s view seems to be when a complex device is used for administration. In that event, the sum total of the products would be regulated as a combination product, while the use of a relatively simple item of administration, such as a dropper bottle, would not cross the threshold needed for regulation as a combination product.

The agency stated in the preamble that other products that fall into the definitions of both drugs and devices will be included in the scope of any final rule or guidance. The final determination of whether a product has to be reclassified will hinge in part on whether the product is metabolized to achieve the primary intended purpose. Imaging agents are specifically called out as a category of products that will be revisited despite the outcome in Bracco. However, the FDA did not state which other categories of products it will eventually examine, leaving a large gap of uncertainty for manufacturers of products that may ultimately be reclassified as devices.

There are several overarching considerations that will be included in any rulemaking and/or guidance, including:

One of the benefits of reclassification is that the user fees are substantially lower for devices than for drugs. In fiscal 2022, the standard fee for a PMA is $375,000 ($94,000 for small companies), while the standard fee for new drug applications is more than $3 million. The FDA stated that manufacturers are liable for the fees under the current fiscal year’s schedule for the existing product designation, although refunds may be available once the product type has been transitioned.

Several stakeholders have submitted comments regarding possible reclassifications, such as the comments by NorthStar Medical Isotopes in support of sustaining the drug classification for diagnostic radiopharmaceuticals. NorthStar stated that the court’s decision in Genus lacked scientific, technical and regulatory context, and that radiopharmaceuticals increasingly fall into the category of nuclear theranostics. The company also emphasized that these products meet the definition of a drug in that diagnostic radiopharmaceuticals may bind to a tumor receptor, a property that fulfills the requirement of a chemical action within the body.

There is still a large area of uncertainty as to how this recategorization process will unfold, but we would urge our clients to plan for multiple contingencies for any products that may be affected by the Genus decision. Obviously, manufacturers should continue paying the user fees that currently apply to their products, given the prospect that the FDA will apply penalties for late payment. A number of companies in the life sciences manufacture both drugs and devices, but even for them, it may be appropriate to begin forming a dual compliance system for products that may ultimately be deemed devices rather than drug, given that the cost of preparation is often dwarfed by the cost of waiting until the last minute to react.