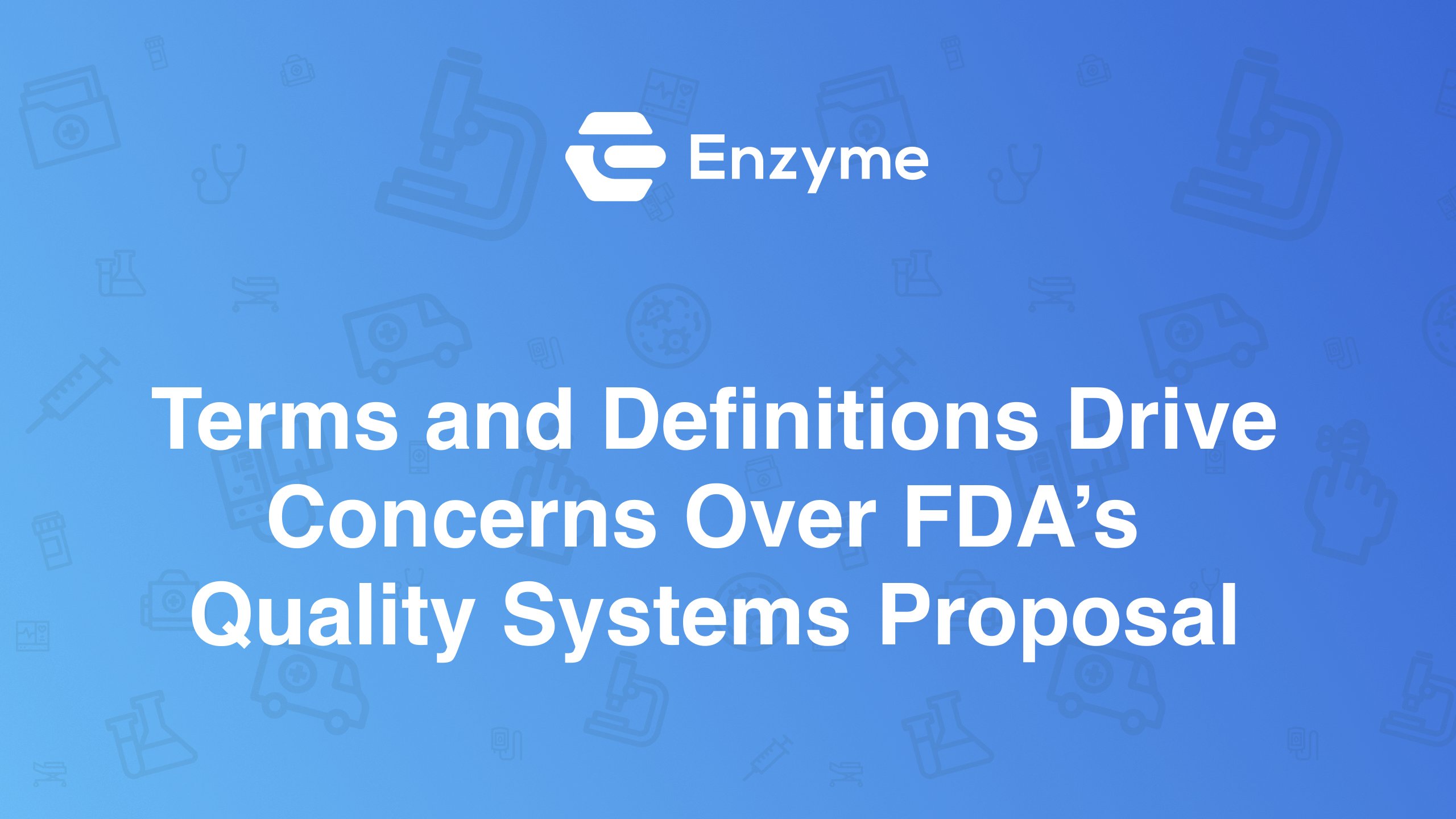 The FDA’s proposed alignment of the Quality System Regulation (QSR) with ISO 13485 is a nod to the demand for regulatory harmonization, and would constitute the first significant change to the QSR since its inception more than 25 years ago. While support for the proposal is broad, there are concerns about how terms and definitions would be altered or done away with, just one of several issues that manufacturers cited in comments on the proposal.

As we explained in a previous blog, the draft rule would align the QSR (also known as Part 820) with ISO 13485 in an exercise known as harmonization by reference. This harmonization-by-reference approach, the result of which is referred to as the Quality Management System Regulation (QMSR), has provoked a range of negative reactions because it creates several dilemmas. Among these are:

One example of the terms and definitions problem is that the draft proposes to eliminate “establish” from Part 820 because the term does not appear in ISO 13485. The draft rule states that the existing version of Part 820 requires that the manufacture establish, implement and maintain the various aspects of a quality system. However, Part 820.3 in its current form also requires documentation of the quality system, which is not mentioned in the draft rule. More than one respondent to the draft highlighted this as a problem because of the perception that requiring a manufacturer to merely document the quality system is inherently less rigorous than requiring the manufacturer to both establish and document a quality system.

Several commenters suggested that the excision of “establish” from the regulation is particularly interesting, given that the draft rule itself uses the word on numerous occasions. Indeed, the draft’s Subpart A – General Provisions highlights the need for a manufacturing site to establish and maintain a quality management system. As pointed out by at least two commenters, the draft rule uses the term in several other key places as well, including the description of Part 820.45 for device labeling and packaging controls.

Substitute for DMR Seen as Short of Identical

Manufacturers were also dismayed by the proposal to do away with the device master record (DMR), which would be replaced by the ISO parallel, the medical device file (MDF). The DMR was described as being more specific on several key details, the omission of which is seen by some as ill-advised. Among these is the DMR requirement that specifications for production processes, including equipment specifications, be documented, whereas the MDF omits such requirements.

More than one stakeholder stated that the lack of public availability of ISO 13485 would violate the Administrative Procedures Act (APA), which requires some degree of transparency during rule making procedures. This question could be resurrected by any future changes to the ISO standard, assuming those changes affect parts of 13485 that are cross-referenced by the QMSR. Section 553 of the APA stipulates that U.S. government agencies provide the terms and/or substance of a proposed rule, or a description of the subjects and issues involved. The language of this part of the APA is likely to be interpreted differently by different parties, but it is not clear whether the FDA’s legal staff see this as a potentially serious challenge to the harmonization-by-reference approach.

In addition to provoking questions about the APA, the copyright problem with ISO standards prompted representatives of small manufacturers to point out that their member organizations have been forced to purchase access to ISO 13485, whereas U.S. regulations are available at no charge. The solution would be to make 13485 publicly available free of charge, and these suggestions were accompanied by the assertion that regulated industries in the U.S. must have full and free access to any legal or regulatory requirements.

The FDA has proposed that the final rule would go into effect within one year of issuance, but several entities recommended two years at a minimum. The QMSR does not present the same breadth and depth of impact on compliance as the European Union’s Medical Device Regulation (MDR), and many larger U.S.-based companies are already using a dual-track, ISO/Part 820 system. However, smaller companies based in the U.S. that do not export their products would be significantly affected, a consideration the FDA said it recognizes.

There is a much larger body of questions about this draft rule than can be addressed in a single blog, such as how the FDA would overhaul its approach to inspections to align more closely with ISO 13485. We would also point out that ISO 9000 is the normative reference for 13485, and thus some terms found in 9000 that are not seen in 13485 might nonetheless prove essential to the device manufacturer. This could add significantly to all the difficulties in terminology and definitions. Whether this will force the manufacturer and developer to purchase ISO 9000 as well as 13485 is difficult to predict, but it is a possibility that we at Enzyme cannot rule out.

The immediate implications of the draft QMSR are limited for larger companies that are conversant with the ISO standard, but not necessarily negligible. The implications for smaller entities with limited or no experience with the ISO standard are quite significant, and thus we urge our clients to pay immediate and close attention to the content of a final rule, assuming the FDA publishes one. This new approach to quality management will at the very least require a much more nuanced understanding of the agency’s expectations, given the need for extensive regulatory cross-referencing. Furthermore, the European experience with the MDR is illustrative of the notion that two or three years can pass in a remarkably rapid fashion, and any delays in the installation of the new quality management system could prove quite expensive.