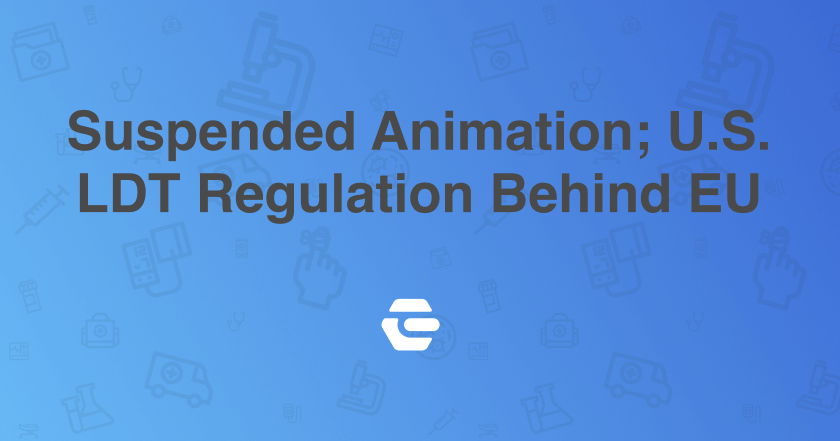 Regulation of lab-developed tests (LDTs) has been in the air for several years in both the European Union (EU) and the U.S., although there are some critical differences in their approaches to regulatory reform. One difference is that an updated set of regulations for in vitro diagnostics, including LDTs, is already in place in the EU, even if the implementation date is still two years away. In contrast, the U.S. Congress and the FDA have still not come to terms on an updated American approach, and the net effect of these two developments is to leave developers in both markets in a state of regulatory flux.

Regulation of lab-developed tests (LDTs) has been in the air for several years in both the European Union (EU) and the U.S., although there are some critical differences in their approaches to regulatory reform. One difference is that an updated set of regulations for in vitro diagnostics, including LDTs, is already in place in the EU, even if the implementation date is still two years away. In contrast, the U.S. Congress and the FDA have still not come to terms on an updated American approach, and the net effect of these two developments is to leave developers in both markets in a state of regulatory flux.

Legislation that overhauls the EU regulations for in vitro diagnostics was passed in 2017, although the attendant In Vitro Diagnostic Regulation (IVDR) does not go into force until May 26, 2022. Because of the COVID-19 pandemic, the implementation date for the companion Medical Device Regulations has been suspended for a year, although there does not appear to be any plan to hold up the IVDR implementation date despite industry’s interest in such a delay.

As may prove to be the case in the U.S., the European IVDR imposes some quality management systems (QMS) responsibilities on developers of LDTs. Chapter II, Article 5 of the IVDR states that many aspects of the regulations do not apply to all LDTs. However, the lab must manufacture and use the LDT “under appropriate quality management systems” without exception. The lab of a health care institution can demonstrate compliance with this requirement by aligning with EN ISO 15189, which bears at least some resemblance to ISO 13485.

The 2012 edition of ISO 15189 provides an annex for correlation with ISO 9001, and lists numerous QMS requirements, including:

However, these labs must also be in compliance with Annex 1 of the IVDR, which addresses risk management, and labs must demonstrate that the needs of the patient cannot be met with a commercially available diagnostic. There is no grandfathering of existing LDTs, which suggests that a large number of tests will require at least some interaction with regulatory authorities, including notified bodies (NBs). To date, only three NBs have been designated for the full range of subject matter expertise and test types, a number that must grow significantly if the overall IVD market in the EU is to avoid a profound bottleneck that could endanger patient access.

There has been a running dispute as to whether the 1976 Medical Device Amendments (MDAs) to the Food, Drug and Cosmetic Act gave the FDA the statutory authority to regulate LDTs, but legislation that emerged from the House Energy and Commerce Committee in March 2017 might seem to have closed the door on that argument. The MDAs do not specifically cite LDTs, but do cover reagents, and the FDA’s response to criticism on this point has been that it is exercising enforcement discretion when it chooses not to intervene. The April 4, 2019, warning letter to Inova Genomics Laboratory affirms that the FDA sees itself as statutorily authorized to govern LDT usage, regardless of the perceived need for enabling legislation.

That first legislative attempt in 2017, by Reps. Diana Degette (D-Colo.) and Larry Bucshon (R-Ind.), gave way to the Verifying Accurate Leading edge IVCT Development (VALID) Act, still the legislative placeholder of record for reform of FDA regulation. The two members of the House Energy and Commerce Committee said in a March 5, 2020, press release that public health officials had complained “for weeks” that FDA policy had hindered public labs’ ability to react to the COVID-19 outbreak, a dilemma the authors addressed by eliminating the premarket requirement for tests in a national emergency. The legislators also acknowledged that this framework would constitute “an entirely new system” for hospitals and other labs. The first iteration of the VALID Act came to light in 2018, as seen in this discussion draft, and thus did not include provisions for testing during pandemics.

Former FDA commissioner Scott Gottlieb advocated a pre-cert style approach during the March 6, 2018, meeting of the American Clinical Laboratory Association (ACLA), a feature that is reflected in some of the aspects of the current version of the VALID Act. The VALID Act details a number of regulatory requirements that will look familiar to manufacturers of therapeutic medical devices. There are QMS requirements for labs that lack CLIA certification for performance of high-complexity tests, which reflect a fairly conventional understanding of Part 820. Among these 16 standard operating procedures are those for:

In contrast, labs that are certified under CLIA for high-complexity tests would be liable for only five quality system requirements, including:

There are a number of non-regulatory factors at play in the U.S. market for LDTs, however, including the ongoing rate reset for the Medicare clinical lab fee schedule (CLFS). This reset of the rate-setting process was dictated by the Protecting Access to Medicare Act of 2014, and while implementation has been delayed by another year, the controversy over the methodology for collecting and reporting private payer rates has not passed, leaving another cloud hanging over LDTs.

Another aspect of the U.S. picture – one which seems to favor LDTs – is the difficulty of obtaining and retaining a patent for a diagnostic test, thanks to the controversies over patent subject matter eligibility. The U.S. Supreme Court announced in January that it would not hear the case of Athena v. Mayo, a case which some stakeholders had argued could make the subject matter question much more manageable. Congress has struggled to draft legislation that would address this dilemma, but the current impasse would seem to help sustain clinician interest in LDTs, given the barriers that commercial test developers must overcome in obtaining intellectual property protection.

As if matters were not complicated enough, Sen. Rand Paul introduced S. 3512, the Verified Innovative Testing in American Laboratories (VITAL) Act of 2020. In a March 18, 2020, statement, Paul said the FDA’s emergency use authorization process had cost clinical labs precious time to respond to the COVID-19 pandemic. The legislation emphasizes the CLIA process and has the backing of the Association for Molecular Pathology.

The road ahead for LDTs in the EU is fairly clear, even if changes are made to the IVDR, but the same cannot be said for the U.S. market. It may be unduly hopeful to imagine Congress will act on LDT legislation in the current calendar year, but stakeholders are likely to press the issue again shortly after the election if the February 2019 letter from the Personalized Medicine Coalition is any indication. Nonetheless, Congress may opt to wait until legislation for the next series of FDA user fees comes up in 2022. Thus, the question for the U.S. market might not be whether there will be legislation, but rather when that legislation will finally see the light of day, and what that legislation will require of developers of LDTs.