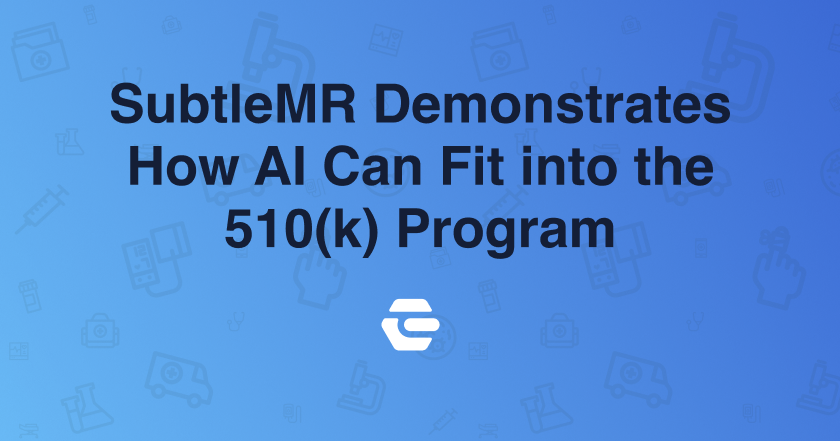 SubtleMR Demonstrates How AI Can Fit into the 510(k) Program

Developers of artificial intelligence algorithms may wonder whether a medium-risk algorithm will be eligible for a class II designation from the FDA, but the case of the SubtleMR shows this need not be a cause for concern.

SubtleMR Demonstrates How AI Can Fit into the 510(k) Program

Developers of artificial intelligence algorithms may wonder whether a medium-risk algorithm will be eligible for a class II designation from the FDA, but the case of the SubtleMR shows this need not be a cause for concern. Subtle Medical Inc., of Menlo Park, Calif., earned a 510(k) for their SubtleMR image processing software recently despite some important differences between the SubtleMR and the predicate device’s algorithm.

Subtle announced in October 2019 that the FDA had cleared the SubtleMR, roughly a year after receiving a 510(k) for the SubtlePET system. These are the first AI algorithms to be cleared for image enhancement for MR and PET systems, the company said, and Subtle emphasized the small clinical workflow footprint of the MR system. Another benefit is that the use of these algorithms means shorter procedure times for patients, a particularly critical differentiator given the difficulty some patients have remaining stationary for extended periods of time. This is especially the case for those with claustrophobia.

Predicate Algorithm Not Described as AI

The 510(k) for the SubtleMR invokes the LLZ product code, with a regulation index number of 21 CFR Part 892.2050. There is no device-specific interface in the SubtleMR, as the sole function of the algorithm is to process images for the end user on MRI systems of 1.2, 1.5 and 3.0 Teslas. Subtle cited the ZOOM system by Zetta Medical Technologies as the predicate device, but there are several key differences between the two. While both are described as software packages that operate on off-the-shelf hardware, the differences include:

The FDA said the SubtleMR has a similar intended use and indication for use statement as the ZOOM, and conceded that the application provokes no novel questions of safety and effectiveness. Subtle Medical successfully made the substantial equivalence case despite that the two algorithms process images in distinctly different ways.

The 510(k) for the SubtleMR describes the ZOOM algorithm’s noise reduction function as using wavelets and image-guided filtering. The ZOOM system decomposes the original image into multiple wavelet sub-bands for de-noising, after which the image is rebuilt via inverse wavelet transform. In contrast, the SubtleMR runs the original images through a series of filter banks, where thresholding and scaling processes are performed. Noise is reduced and images are sharpened with neural network-based filters in the SubtleMR algorithm, but Subtle Medical was able to overcome these technological differences in its 510(k) filing with the help of Enzyme’s regulatory team.

One of the interesting aspects of both these 510(k)s is that Part 892.2050 is labeled for picture archiving and communications systems. At first glance, this description might seem to lack the scope for image processing systems, but the scope of this regulation includes software components that manipulate, enhance, compress or quantify images. There are several other sections of subpart B of Part 892 that might seem to overlap, such as 892.2010, but this regulation describes class I medical image storage devices, and thus includes no special controls.

The special controls for 892.2050 includes adherence to voluntary standards, such as the Digital Imaging and Communications in Medicine (DICOM) standard. However, the DICOM standard is anything but a fixed standard, and at present includes requirements for grayscale standards for display function, among others. The DICOM website provides a link to the minutes from the July 30, 2020, meeting of the DICOM work group for artificial intelligence and application hosting, which has met frequently in recent months despite the COVID-19 pandemic. In turn, there is a link to a Google document that makes reference to a nascent effort to develop standards for service discovery and control, an effort that developers of AI algorithms may want to track closely as it evolves.

Predicate Creep Seemingly Not an Issue

The FDA has some long-running reservations about how industry makes use of predicate devices, which is reflected in a presentation the agency made in 2010 for a public hearing on the 510(k) process. This presentation addressed incremental changes that accumulate across serial additions to a product code and thus represented “device creep,” often referred to in the regulatory vernacular as predicate creep. This is just one of several concerns that arose in connection with the 510(k) program following the departure of Dan Schultz from his position as director of the Center for Devices and Radiological Health in 2009.

That 15-year span between the clearance of the ZOOM and its predicate may be a thing of the past, however. In November 2018, the FDA posted a statement calling for an updated approach to the 510(k) program, which includes a greater “reliance on more modern predicate devices or objective performance criteria.” The data then on hand suggested that predicates older than 10 years had been cited in 20% of 510(k)s, which the agency construed as an indication that “some devices may not be continually improving.”

The use of AI in imaging applications is becoming more widespread, and developers may find that their 510(k) applications are subject to increasingly stringent premarket requirements. While the FDA has indicated interest in pursuing alternative premarket review mechanisms for software products (i.e. the Digital Health Software Precertification (Pre-Cert) Program), they also have admitted such a change will likely require Congressional action to modify their statutory authority. Meanwhile, the conventional premarket review mechanisms still apply to AI in imaging and any other application. And, selection of the predicate is almost certain to become an even more important part of the development process, particularly given that the FDA’s approach to AI is still in flux.