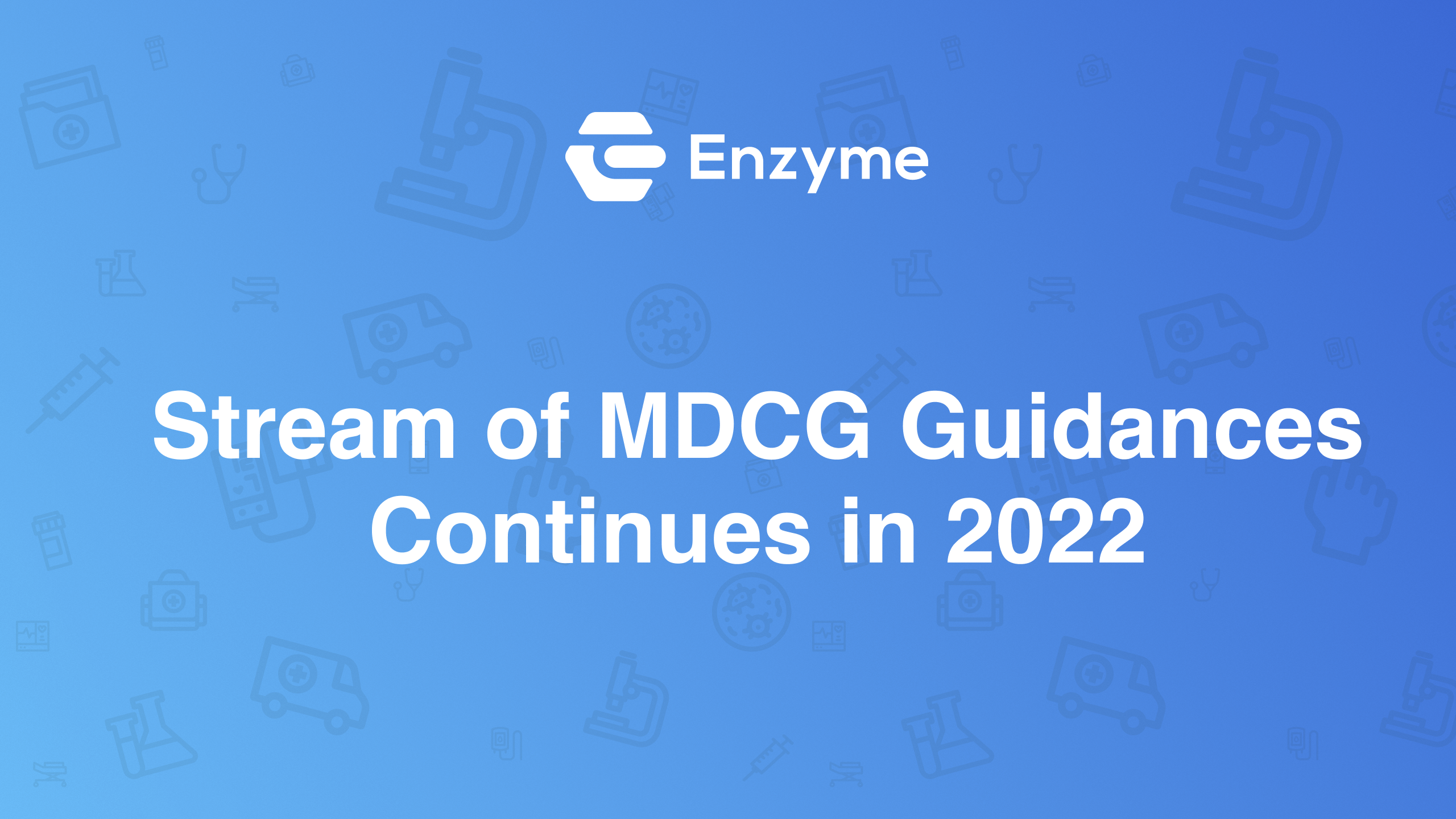 Stream of MDCG Guidances Continues in 2022

The European Union’s Medical Device Coordination Group (MDCG) has released a number of guidances addressing the transition from legacy regulations to the Medical Device Regulation (MDR) and the In Vitro Diagnostic Regulation (IVDR). We’ll take a look at two of those guidances in this blog, and we urge our clients to closely track all these developments as this transition period creates a significant risk of delays to market.

First, we’ll examine the MDCG guidance for verification of manufactured class D (high-risk) in vitro diagnostics (IVDs). While the stated beginning compliance date for the IVDR is still May 26, 2022, class D IVDs have until May 2025 to come into compliance, per a Dec. 20, 2021 statement by the European Commission.

There are two types of entities with which the manufacturers must coordinate, notified bodies (NBs) and European Union reference laboratories (EURLs). However, just as there is an ongoing shortage of NBs that are certified in any one area of the MDR and the IVDR, there may also be a shortage of EURLs to manage the volume of testing required for compliance with the IVDR, creating a double bottleneck that may persist for an extended period.

Class D IVDs include those used to detect the presence of or exposure to transmissible agents in blood or other tissues intended for transplant, while IVDs used to determine tissue immunocompatibility are typically class C (medium-to-high risk). There are exceptions to the class C designation for immunocompatibility IVDs, however, such as tests for ABO blood group, which is a class D test.

Manufacturers are required to take up an agreement with an NB that includes nine specifications, such as:

The EURL that will perform the evaluation must sign off on the manufacturer’s agreement with the NB, but the EURL and NB must also have signed an agreement for these services. These NB/EURL contracts must describe several provisions, such as arrangements for devices and/or specimens that have unusually short shelf lives, along with the fees charged by the EURL for its services.

First-line assays, such as those used to evaluate ABO risk and risk of antibody stimulation, come with an initial requirement for EURL evaluation of a sample from every batch. The guidance states that calibrators and controls for these IVDs are presumed to present the same level of risk as the device/reagent, and thus are subject to the same EURL evaluation frequency. The NB is at some discretion to determine the frequency with which other IVDs are to be evaluated as the guidance is not prescriptive on frequency of batch testing for these other class D IVDs.

The NB can provide a less frequent EURL evaluation schedule for tests that initially come with a per-batch EURL evaluation requirement. The specifics of this more relaxed review scheme will be determined by several factors, such as the availability of common specifications for test performance and the IVD’s postmarket surveillance numbers. Production process changes may also play a role in determining whether less frequent EURL performance assessment is permissible, as do test stability and shelf life.

The NB is responsible for verifying the manufacturer's quality control (QC) data and the criteria used by the manufacturer to establish pass/fail criteria, and the NB has 30 days to notify the manufacturer of the results of the NB’s review of the data. After 30 days, the manufacturer may place their tests on the market absent an adverse decision by the NB, the guidance states.

As our clients know, the EU’s transition away from the Medical Devices Directive (MDD) and the Active Implantable Medical Devices Directive (AIMDD) has been difficult, and a guidance released in February 2022 highlights how complex this transition is. The guidance clarifies some of the requirements for manufacturing site surveillance for devices granted market access under the legacy regulation, and there are several critical details that exert a large effect on those surveillance requirements.

The terminology used by MDCG is potentially confusing, so we advise our clients to refresh their understanding of those terms. MDCG states a legacy device is a device that is placed on the market after the date of application of the Medical Device Regulation (MDR), which is May 26, 2021, but not later than May 26, 2024.

The term for a device that was granted a CE mark prior to May 2021 is “old device” per a guidance issued by MDCG in 2021, while the term “MDR device” is applied to a device that is compliant with the MDR, but which is not a legacy device. The scope of the February 2022 surveillance guidance is largely limited to devices that were granted a CE mark prior to May 26, 2021, and thus are old devices, a category that includes a vast number of products that are still on the market in the EU.

This guidance states that the QMS that was deployed at the manufacturing site under the legacy regulation will suffice while the device is still regulated under that regulation, and that the NB responsible for the device need not be certified under the new regulation. MDCG advised that the NB that oversaw a device placed on the market between May 2021 and May 2024 under the previous regulatory frameworks must continue to provide surveillance in the meantime.

NBs are required to review the documentation for a manufacturer's QMS system, but the nature of the NB’s fulfillment of this requirement is also subject to several variables. Among these are whether the device has undergone a significant change in design or intended use, and whether the manufacturer is planning to or has completed a revision of its QMS to comply with the MDR. The NB’s audit plan for a manufacturing site is affected by the QMS documentation review, and MDCG indicated that NBs can conduct unannounced audits depending on the results of the QMS documentation review.

One of the key questions for manufacturers is whether to expect an on-site visit from the NB for the manufacture of a device granted market access under the MDD or the AIMDD. MDCG did not provide a bright line between the circumstances that would and would not trigger a need for such an audit, however, leaving the NB with considerable leeway. Among the considerations NBs will take into account are:

This is not an exhaustive review of this guidance, and obviously there is a lot to take into account with regard to NB surveillance of a manufacturing site. This includes whether the NB will be able to conduct an on-site audit, assuming it has the bandwidth to review QMS documentation in a timely manner. Our clients may be concerned about the practicability of these timelines and other considerations, but two European national trade associations are also concerned.

In mid-March, the associations for device makers in Germany and France issued a joint statement calling for another two-year extension of the MDR compliance deadlines for class III and implantable products, along with a rapid expansion of the capacities of NBs. A failure to act promptly to address these problems risks “a collapse in patient care,” the authors of the joint statement said. We at Enzyme will keep our clients updated on these and other developments as this regulatory transition continues to unfold.