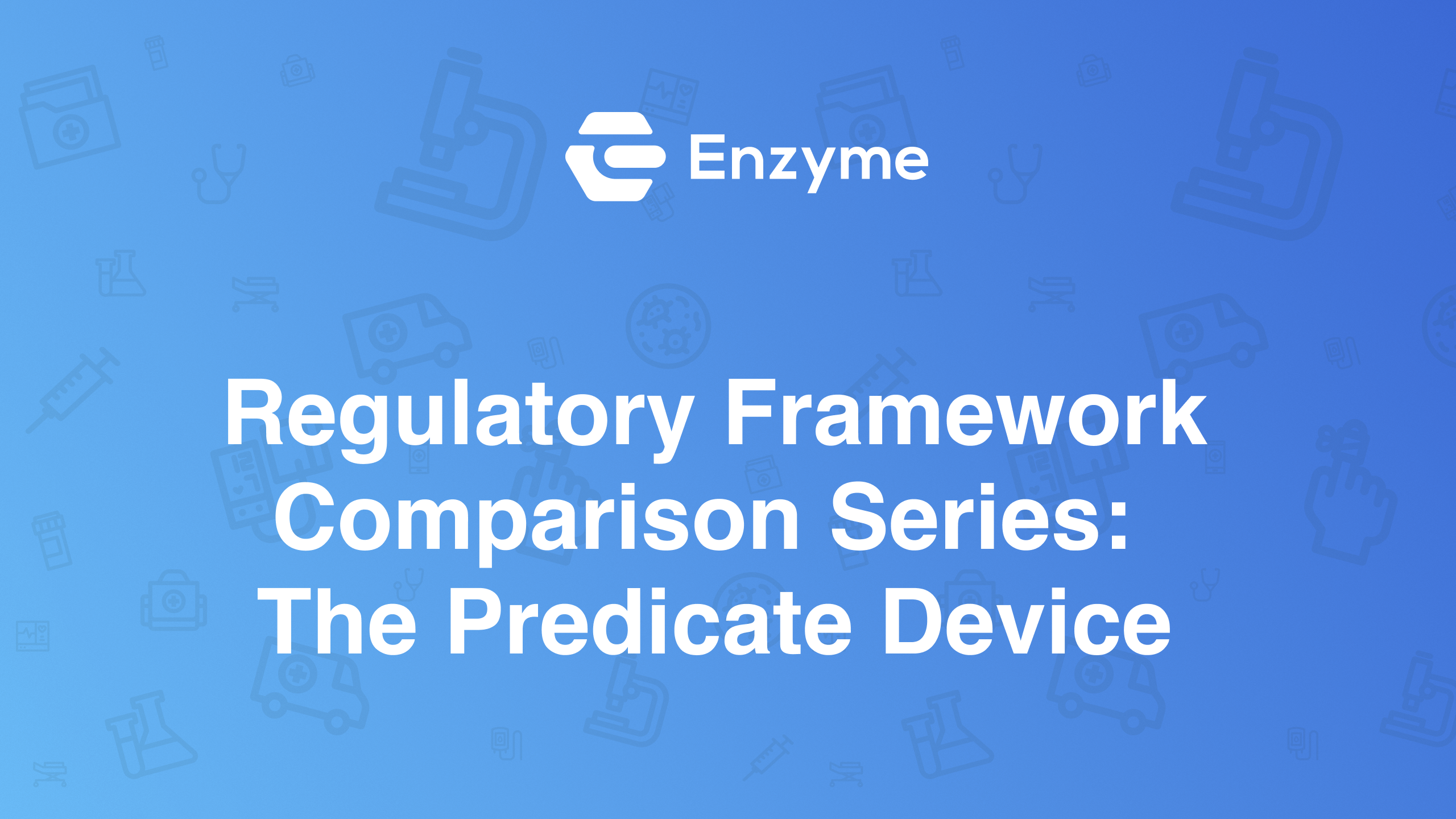 A large number of device types fall into the category of medium-risk devices, a group of products that can make use of an existing device as a regulatory reference point. The utility of these predicate devices varies from one market to another, however, a fact of life that suggests that manufacturers should plan ahead in order to maximize the value of their investment.

As a point of clarification, the regulatory bodies in this blog do not all employ identical risk frameworks for medical devices. The FDA uses three classes (classes I, II and III) while the European Union (EU) and the U.K. have a four-tier system, classes I, IIa, IIb, and III. The scope of their respective predicate device policies also varies, although the difference might be negligible as a practical matter in some instances.

For the FDA, substantial equivalence to a predicate device as a formal policy, published in 2014, is exclusive of class III devices, which are reviewed under the PMA program. The FDA does not ignore a first-in-class device where subsequent PMA applications for that device type are concerned, but the value of that first device to subsequent entries is both limited and informal.

Broadly speaking, the FDA’s position on substantial equivalence is that the new device cannot raise new questions of safety and effectiveness relative to the predicate device. This is a concern which can be activated by the use of new materials, new methods of sterilization, and new sources of energy where applicable. A new indication for use relative to the predicate is not necessarily prohibited so long as the intended use is the same.

The EU approach as described in a Medical Device Coordination Group (MDCG) guidance allows manufacturers to recite a predicate for class III device applications. However, this requires that the manufacturer of the applicant device have access to the predicate device’s dossier. Given the attendant intellectual property considerations, it seems highly unlikely that this path will be available other than when the manufacturer cites one of its own devices as a predicate. This policy seems to capture device implants of all risk classes as well as class III devices.

In its proposed regulatory rework, the U.K Medicines and Healthcare Products Regulatory Agency (MHRA) seems intent on adopting an approach similar to that taken by the EU, although there is some uncertainty on several points. MHRA’s responses to its request for information regarding the new regulatory proposal makes no statement of limitation regarding the risk class of devices that can use a predicate device, suggesting that class III devices are eligible for a substantial equivalence claim.

MHRA did not explicitly state whether it would require the maker of the follow-on device to obtain a contract with the manufacturer of the predicate, but the matter was addressed in the request for information. This type of requirement drew the support of 9% of those who had responded to a question about device equivalency, but it is not clear how the agency is inclined to react. The relatively low level of support, while not dispositive, is suggestive, however.

The FDA’s 2014 guidance on substantial equivalence disallows the use of a split predicate, which would recite the intended use of one device while employing the technologies found in another device. However, the agency allows the use of multiple predicates in several scenarios, such as when combining the features of two or more devices into a single device, assuming the same indication for use is found in both predicates. Two or more predicates can also be referenced for a device that is cleared for more than one indication for use under the same intended use statement.

MDCG allows the use of more than one predicate, but there is little practicable leeway, raising questions as to whether this is an allowance only in theory rather than in fact. The guidance states that manufacturers may identify more than one equivalent device in their filing, but that each predicate must be equivalent to the device under evaluation “in all the listed technical, biological and clinical characteristics.” MHRA seems to have excluded the use of multiple predicates from the scope of its policy, stating that it will introduce requirements for “entire equivalence” on biological, technical and clinical bases. While this does not constitute an explicit exclusion of multiple predicates, it is suggestive of a reticence to allow multiple predicates as a practical matter.

The FDA’s position on the allowable degree of technological differences is ambiguous, which is at times an asset and a liability to manufacturers and developers. The stated standard is that a predicate can be recited so long as the technological characteristics of the new device do not raise any new questions of safety and efficacy. The FDA does not allow the use of a predicate when the new device bears a different intended use, but the agency said also that the intended use most commonly becomes a problem when the indication for use for the new device strays too far from the predicate’s indication for use.

The MDCG guidance references a statement in the Medical Device Regulation’s Annex XIV that a new device can reference a predicate when the new device is used under similar conditions of use, and bears similar specifications and properties. MDCG also states that equivalence can be demonstrated only when there are no differences in the safety and performance of the candidate device, a seemingly less forgiving application of the concept of equivalence relative to that used by the FDA.

MHRA steers an even tighter course on the question of technological differences, as seen in the insistence that the applicant device represent “entire equivalence” to the predicate. The agency acknowledged that this would be a more stringent set of requirements than are in effect in the EU, but MHRA said this approach is unavoidable due to what the agency sees as an elevated risk associated with multiple iterations of equivalency.

This is far from an exhaustive treatment of the use of predicate devices, particularly for the U.S. market, where the FDA has created a relatively new channel for device performance criteria in lieu of substantial equivalence. This program is limited to well-understood device types, but the broader picture of device equivalency across regulatory regimes is an implicit endorsement for vigorous planning. These three regulatory approaches do not always diverge sharply, but details matter where premarket applications are concerned. Thus, we endorse the proposition that manufacturers carefully examine the policies at play in each of the markets they intend to approach.