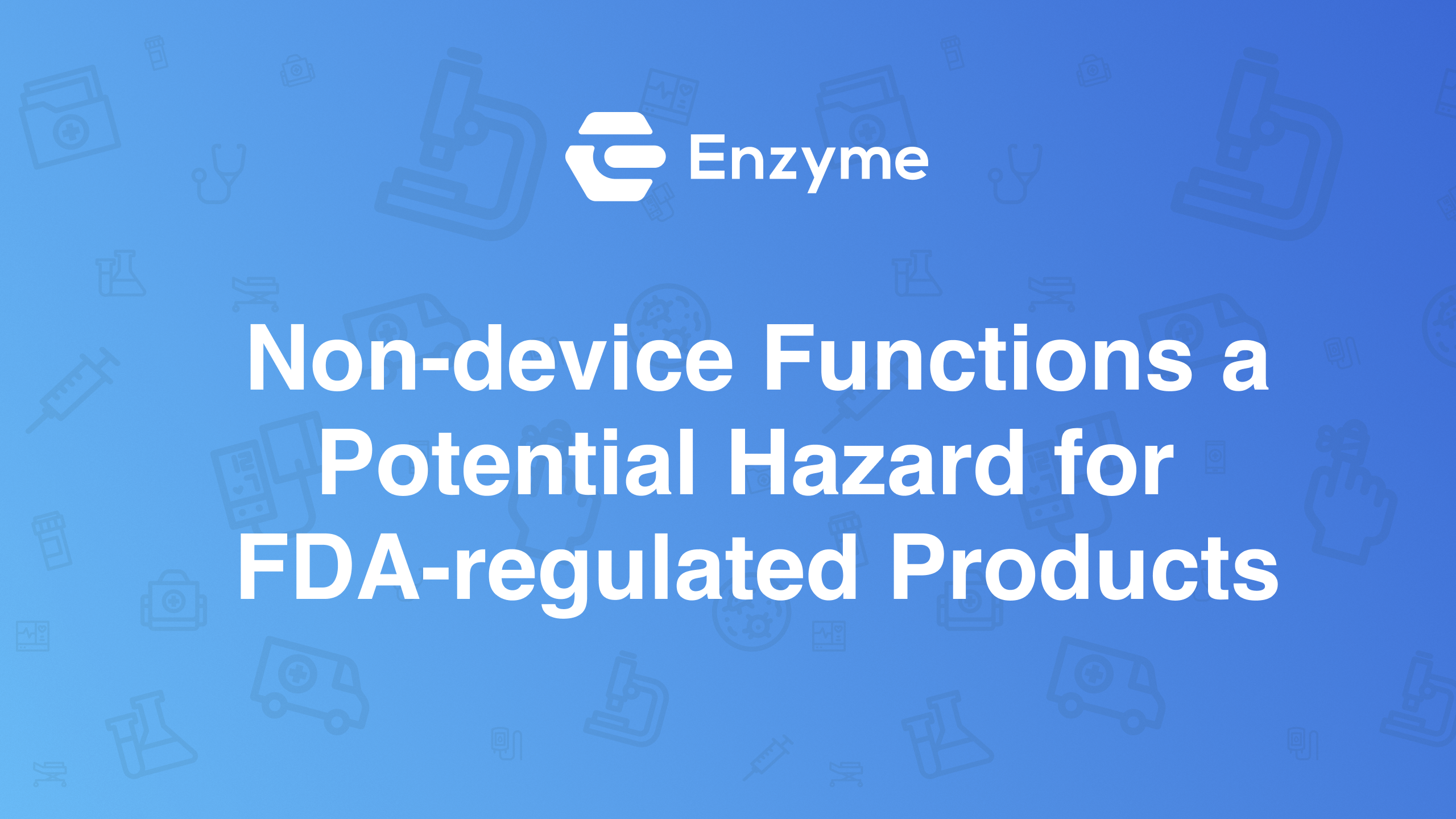 Enzyme Team
-
February 8, 2022
The Folks Behind the Brand

We’ve covered a number of software-related FDA guidances recently at our blog, and as promised in our blog on general wellness products, we’ll now review the FDA guidance on multiple-function device products. We should point out that the scope of the multiple function guidance covers both hardware and software devices along with devices that incorporate both, but this guidance might not have been necessary if not for the 21st Century Cures Act’s provisions for regulated software functions.

As is widely known, the Cures Act redefined a medical device so as to exclude a number of software functions, which forced the FDA to develop a guidance to address device and non-device functions in a given device. This guidance also includes a discussion of software that legally qualifies as a device, but for which the agency continues to exercise enforcement discretion. In addition to multiple-component hardware devices, the scope of the guidance includes device-drug and device-biologics combination products. If the primary component of a combination product is not a device, the principles behind the guidance may still apply, assuming the device component is a multiple-function product.

Role of ‘Other Function’ Potentially Benign

For the purposes of this guidance, the term function is defined as “a distinct purpose of the product,” which can be the intended use or a subset thereof. The guidance adds a novel term to the regulatory dictionary, the “device function-under-review,” which is the function for which the agency is conducting the premarket review. The term “other function” describes the function of the device that is not the subject of the FDA assessment of the device, and these other functions will not be subject to the same level of scrutiny merely by virtue of their presence in the device. However, the FDA states that its reviewers may assess the impact of these other functions on the device function-under-review to establish whether the other function exercises any effect on the safety and/or efficacy of the device.

There are several elements of a premarket filing that may have to be adjusted to account for the non-reviewed device function, such as:

In one of the more important passages, the guidance states that the agency will not examine the data behind a non-reviewable function unless there is reason to believe this other function could exert a negative effect on the device function-under-review. The example given in the guidance is regulated software that provides an analytical function and a data trending module that qualifies as the other function. In this example, the trending function is a device strictly speaking, but is subject to enforcement discretion, and thus the premarket process would apply only to the analysis component.

Developers must be careful with regard to adding claims or new functions to these other functions. One possible consequence is that a new 510(k) would be required, as seen in the FDA’s guidance on when to file a new 510(k) on the basis of changes to an existing class II device (there are similar guidances for changes to 510(k) software devices and for PMA devices). The 510(k) changes guidance states that a new filing could be required for a change that positively affects device safety and/or effectiveness, a point we are emphasizing because there are two scenarios in which it could be an issue for a non-reviewed function. One scenario is when the FDA determines that it is time to bring an end to enforcement discretion for a device function that is currently under enforcement discretion.

The other is when a legally non-device function is converted into a regulated device function, which can happen merely by virtue of a new claim or claims made by the manufacturer/developer. The addition of new capabilities to that non-device function could push it over the regulatory line as well, and thus developers should remain aware that any new claims or added functionality could ultimately trigger a need for a new regulatory filing.

Risk Analysis Must Document Role of Other Function

The product’s hazard analysis records will have to include documentation of any impact exerted by the other function on the performance of the device function-under-review, regardless of whether that effect is positive, neutral, or negative. This analysis must include an examination of the effects of a failure of the other function to perform as intended when the anticipated effect is beneficial.

The guidance states that the manufacturer must document its hazard analysis for determining that the other function will have no effect on the device function-under-review as part of design controls. The agency may request to see this documentation during an inspection, but premarket submissions for the function-under-review need not include the hazard analysis if the manufacturer determines that the other function will exert no negative effect on safety or efficacy. Otherwise, this information must be included in the premarket filing.

In sum, the policy behind the multiple functions guidance gives developers a substantial amount of leeway when it comes to these other functions, but there are nonetheless a number of hazards. We recommend, as always, that developers read this guidance carefully early in the development process, which is still the most reliable way to get to market without incurring any unforced (and potentially expensive) errors.