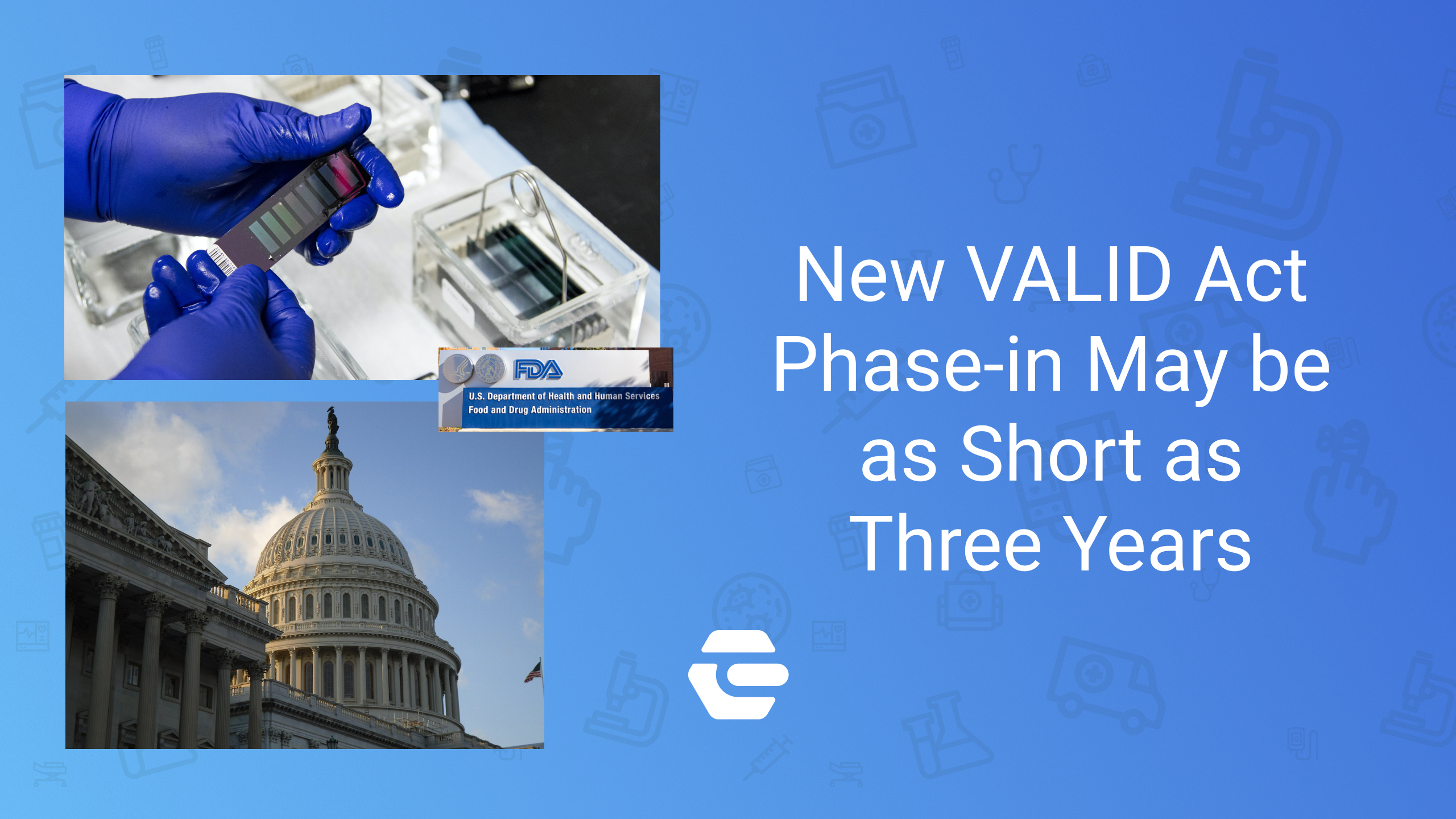 The House and Senate may soon start to review the latest version of the Verifying Accurate, Leading-edge IVCT Development (VALID) Act, a bill that has more than its share of skeptics. The section-by-section summary of the VALID Act states that its terms will be in force at the beginning of the fourth fiscal year after passage, which could translate to a phase-in of only three years, depending on the date of passage.

One of the more likely paths to a House or Senate vote for the VALID Act is the legislation that will reauthorize the device user fee. That legislation must be signed into law prior to the end of fiscal year 2022, but the House and Senate are under little pressure otherwise to forward a bill to the Oval Office before then. The previous user fee legislation was not signed into law until August 18, 2017, a scenario which if replicated next year would leave a phase-in term of less than 38 months.

As a comparison, the EU’s Medical Device Regulation (MDR), which was formally adopted in 2017, has already been suspended a year due to implementation difficulties. The one-year delay in the MDR was ostensibly granted due to the COVID-19 pandemic, but industry was becoming noticeably concerned about the viability of the MDR implementation date prior to the outbreak of the pandemic. The five-year implementation period of the In Vitro Diagnostic Regulation (IVDR) is also a source of concern despite that the formal implementation date is not until 2022, all of which goes to demonstrate the difficulties of implementing these sweeping regulatory overhauls.

The framework carries several features that are already in place for medical devices, such as preemption of state regulation and provisions related to refunds for faulty devices. One of the more novel proposals is a technology certification mechanism, which replaces the precertification feature of the prior version of the VALID Act. This provision provides a class certification for tests that do not qualify as high-risk devices. There are several stipulations, however, including that:

It should be noted that the disqualifier regarding violations of CLIA can be overcome if the test sponsor has resolved the violation with the Centers for Medicare & Medicaid Services. The legislation permits at least the limited use of a predicate device, so long as the predicate is developed by that sponsor. A developer may “incorporate by reference any content of an application previously submitted” by that developer, assuming the FDA approved or cleared the earlier application, the legislation states.

However, this exemption requires that the developer not modify the test after the date of passage of the legislation. There are exemptions for low-risk tests and some “manual tests,” as well as public health surveillance tests, the last of which is clearly a nod to the exigencies of pandemics. The legislation provides another exemption, the humanitarian test exemption (HTE), but while the humanitarian device exemption comes with a general ceiling of 8,000 device/patients per year, the HTE is limited to 10,000 test performances each year. However, the bill gives the FDA some leeway in determining the final number. There are provisions for breakthrough clinical tests and requests for informal feedback, the latter of which would require the FDA to respond to within 60 days.

The legislation offers a number of definitions that should be watched as they are converted to regulation. For instance, the term “develop” would be defined in part as the modification of a test kit in such a way as to affect the indication for use, the performance, or the safety of the test. The term “developer” would be defined as anyone who uses a test in the manner just described. These provisions get around the problem of the lack of FDA oversight of test kits that are modified by the operator of a clinical lab.

One of the more interesting dilemmas for the FDA in implementing the VALID Act, assuming it passes, is the degree to which the agency will try to harmonize its regulations with other regulations. The In Vitro Diagnostic Regulation (IVDR) is in place in the European Union (EU), even though it is an ongoing source of stress as the May 2022 implementation date approaches. Conversely, the FDA continues to struggle to put forth a draft rule for aligning the Quality System Regulation (QSR) with ISO 13485. Given the well-known difficulties associated with regulatory harmonization, this might not be a high priority in any FDA rulemaking associated with the VALID Act.

Inevitably, there will be skepticism regarding legislation with this kind of reach and impact on the marketplace, and one example of this is the analysis of the VALID Act provided by the FDA Law Blog. Gail Javitt and Jeffrey Gibbs of Hyman Phelps & McNamara highlighted several concerns, such as the exceptionally detailed definition of what would constitute a low-risk test. There are five criteria that could be used to determine whether a test qualifies as a low-risk test, and Javitt and Gibbs stated that some of these terms suffer from imprecision, which lends yet more uncertainty as to what might qualify as a low-risk test.

The components used to qualify a test as low-risk are not unique to the FDA’s regulatory dictionary, but Gibbs and Javitt said the combined effect of the concepts would create “a new statutory equation,” the ultimate effect of which is difficult to predict. Once enacted into rulemaking and guidance, this language will give the FDA a substantial degree of latitude in applying a risk determination to a test.

We at Enzyme will of course keep our clients abreast of these developments, assuming the legislation passes, but stakeholders may want to remain engaged on this legislation as it goes through the committee process. The House Energy and Commerce and the Senate Health, Education, Labor and Pensions Committees will review the VALID Act at some point, and we would note that the best way for stakeholders to ensure that the regulation is appropriate for the intended use is to ensure that the legislation is, too.