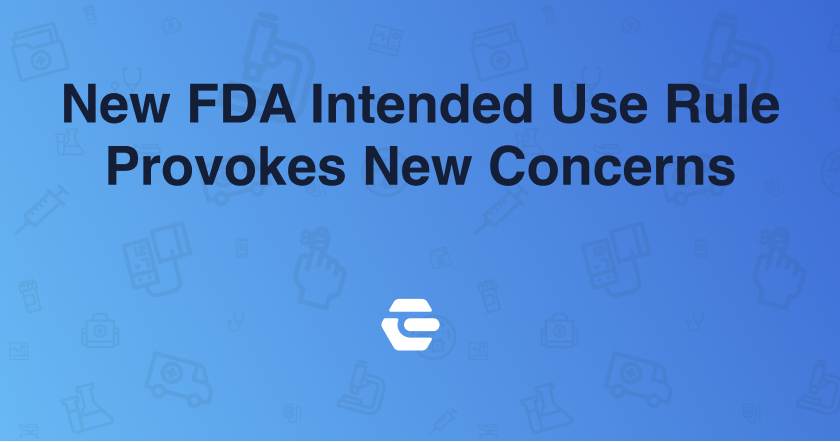 The FDA has released a new version of the intended use rule, the third time in five years the agency has attempted to revise the rule. The agency stated that this new version removes some problematic text found in a previous version, but several observers believe the update has its own set of problems.

The Sept. 22, 2020, FDA press release makes the claim that the update does not constitute a change in the agency’s policy. Instead, the update is an attempt to identify the types of evidence the agency believes are relevant to establishing the manufacturer’s intended use, the press release states.

The FDA said the proposed rule repeals and replaces portions of the 2017 final rule, which never went into force thanks to a delay announced in March 2018. The new draft states that the FDA’s long-standing position is that any relevant source of information can be leveraged to demonstrate the manufacturer’s intended use. Among these sources are:

Product labeling and claims, promotional materials and advertising;
Statements made on behalf of the manufacturer that imply a use of the product; and
Objective evidence of intended use, including direct and circumstantial evidence.

The FDA describes several sources of circumstantial evidence, which alone would not suffice to make the inference of intended use, such as dissemination of safety information about a product’s unapproved uses. The agency may have made this allowance as a means of avoiding tension with the June 2018 payor communication guidance. The scope of the payor communication guidance is limited to insurers, formulary committees and similar entities, and states that information about off-label use will not provoke enforcement action so long as the information provided is both accurate and truthful.

Another example of circumstantial evidence that alone would not suffice to infer intended use is the discovery that a physician practice has ordered a pharmaceutical not indicated for the patients whom that practice serves. The FDA provided the example of a drug manufacturer whose sales tracking indicates that a product approved only for adults has been distributed to a pediatric physician’s practice. This exception requires that the manufacturer’s representatives have not communicated with or distributed product samples to that practice.

In a novel addition to the policy, the proposed rule gives several examples of product design or composition that could be used to infer the intended use. One example of this is a stent that is specifically sized for a use that differs from the device’s intended use statement. Another example is a suture delivery device featuring a snare loop that is sized for a procedure that is different from the approved or cleared use of the device.

The draft rule drew a response from a number of entities, including the Washington Legal Foundation (WLF). WLF vice president of litigation Cory Andrews stated that the draft would invite a court challenge based on the First Amendment, assuming the final rule is unchanged from the draft on several key points.

Andrews said the WLF had raised concerns about First Amendment issues in previous versions of the rule, and advised that the statute does not ban off-label communication. He said the proposed rule’s inclusion of statements regarding off-label use as evidence of intended use would seem to suggest that “almost any statement by a manufacturer about its product may seem like an implicit endorsement of that product.” The agency’s approach to misbranding veers dangerously close to suggesting that any scientific claims about a drug or device are misleading, because the agency fails to distinguish between true and false claims or statements about the product, according to Andrews.

Andrews said the FDA had declined to appeal its loss in the Second Circuit Court of Appeals in U.S. v. Caronia, and instead relies on a non-binding dissenting opinion in that case to make the argument regarding the role of commercial speech in misbranding. WLF recommended the agency amend the draft rule so as to comport with the majority decision in Caronia, and to recognize a manufacturer’s First Amendment right to convey truthful information about a product in the appropriate settings without fear that doing so will create a new intended use.

Another set of criticisms came from Jeffrey Shapiro of Hyman, Phelps & McNamara, who said in a blog that the proposal to delete the provision about knowledge of off-label use had already been proposed in the 2015 draft rule. A simple deletion of the knowledge requirement would have eased the difficulty substantially, he said, but Shapiro also highlighted the design-or-composition language in the new proposal as a significant departure from the agency’s traditional emphasis on communication.

Shapiro said the concept of inferring intended use from a product’s design or composition is unprecedented, adding that such a practice would fly against the regulatory requirement that some form of communication be involved in making that inference.

Despite the agency’s proposal to eliminate mere knowledge of off-label use as adequate evidence of intended use, Shapiro argued allowing such knowledge to be leveraged as part of a larger effort to infer intended use raises an entirely new set of issues. Rather than simplifying matters, this change would create an “obvious lack of clarity” on the role of that knowledge, and hence should be deleted from the proposed rule, he said.