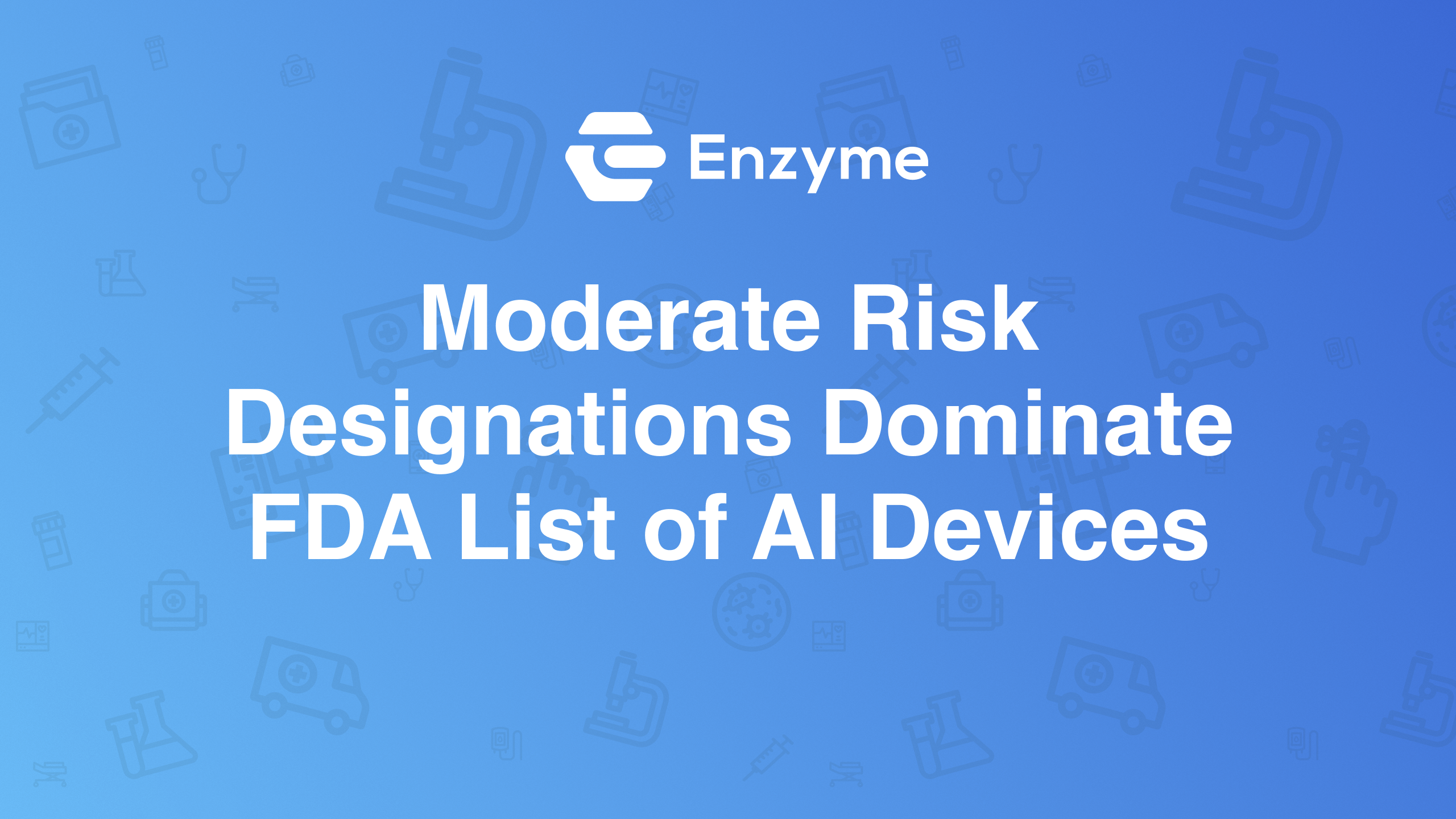 The FDA has posted a list of more than 300 artificial intelligence (AI) products granted market access as class II and III devices, and it comes as no surprise that the vast majority of these were for radiological uses. There are a number of important details, such as the fact that only one entry was reviewed as a PMA device, but the de novo devices on the list yield some useful insights with regard to the agency’s thinking on special controls and clinical study requirements.

The list includes 343 devices as of Sept. 22, the oldest of which dates back to 1997. This 510(k) was for a ventilatory effort recorder by Compumedics, and was the ninth device cleared under the MNR product code, a code that has more than 150 entries. The most recent item on the MNR list is dated July 6, 2021, making clear that obsolescence has not afflicted this product code.

Interestingly, the FDA provided links to other resources for AI products cleared or approved by the agency, at least one of which lists more than one PMA said to involve the use of AI. The list at the Medical Futurist website includes the Guardian Connect system by Medtronic as a PMA product using AI, but the Guardian Connect is not on the FDA list, suggesting that more than one definition of AI is currently in play.

The Guardian is not approved for direct indication of a need for glucose control therapy, but only to suggest when a fingerstick test is needed. Any adjustments to therapy would be made on the basis of readings obtained from a home glucose monitor rather than on the Guardian’s output. We at Enzyme proudly make note of the fact that one of our clients, Subtle Medical, makes an appearance on the FDA AI list as we explained in a previous blog.

The single PMA device on the FDA list is the QVCAD by QView Medical, a product indicated for analysis of mammography images drawn from a specific automated breast ultrasound system. The QVCAD was validated for use with the Somo.V ABUS system with an internal clinical image evaluation database of more than 1,900 image volumes drawn from 398 cases (154 cancers and 244 non-cancers). The data provided by the FDA suggest that specificity was seen as a far less important measure of algorithm performance than sensitivity, According to the FDA, the validation demonstrated:

This retrospective non-inferiority study compared the QVCAD processing of Somo.V images to Somo.V images alone, enrolling 19 radiologists across nine U.S. states. The radiologists were from varied sites of practice (academic research and academic practice as well as private and community practice), and were possessed of varying levels of experience. Twelve of the 18 radiologists who completed the study had at least 10 years of experience, but it is not clear from the approval whether this reflects the typical experience of radiologist readers across the U.S. This PMA does not approve the device as a primary diagnostic, but as an aid during mammography screening procedures.

One of the more interesting examples of class II AI products may be the de novo for the IDx-DR, which the agency said is the first device granted market access as a screening instrument without the need for immediate clinician interpretation. This product, by Digital Diagnostics Inc., of Coralville, Iowa, is intended to evaluate ophthalmic images for indications of diabetic retinopathy. The labeled indication includes that the system can be used in a primary care setting, a feature that gives Digital Diagnostics a tremendous point of market entry. The IDx-DR is a cloud-based service rather than an algorithm deployed at each site, a not-uncommon practice for many such products. However, it appears that other companies are keen to enter the primary care space for important diagnostic functions with the help of AI.

One example of this is the eponymously named skin cancer detection device by DermaSensor Inc., of Miami, Fla., which was awarded breakthrough device status in May. This system uses a machine learning algorithm to determine whether a lesion should be referred for further examination by a specialist, but is also expected to reduce the number of referrals to a dermatologist that would ultimately prove futile.

It should be noted that the de novo application for the IDx-DR carried a substantial development liability, including enrollment of a clinical study of retinal images obtained from 900 patients with diabetes at 10 primary care sites. The enrollees were asymptomatic and had not been previously diagnosed with diabetic retinopathy, but the study population was enriched with patients with elevated levels of HbA1C to increase the odds of enrolling patients with advanced cases of retinopathy. The new regulation per this de novo is 21 CFR, 886.1100, but that regulation had not been added to the Code of Federal Regulations as of the date of this blog.

The de novo order describes the IDx-DR software version 2.0.0 as presenting a major level of concern per the 2005 guidance for the content of premarket submissions for software contained in medical devices (the contained software guidance). There are several qualifiers for level of concern per this 2005 guidance, including that the major concern label is applied to a product when a failure or latent flaw could result in serious injury or death to patient or clinician. Any incorrect or delayed information with the same end result would also qualify as a product raising a major concern.

The guidance offers several examples of uses that would constitute a major concern, such as:

The FDA has acknowledged the need to update this guidance by listing it as an A priority for the fiscal 2021 guidance agenda, but there is as yet no sign of a new draft version, and thus no signal as to what the agency has in mind for the next edition. Whether the next draft will retain the policy that a software device bears the same inherent risk as the associated hardware device is difficult to predict, but there is at least one precedent for a possible lower risk designation. The FDA’s approach to device accessories makes clear that the device accessory does not necessarily fall into the same risk category as the primary device, an approach that the next contained software guidance may replicate. We at Enzyme will keep our clients updated on this development.