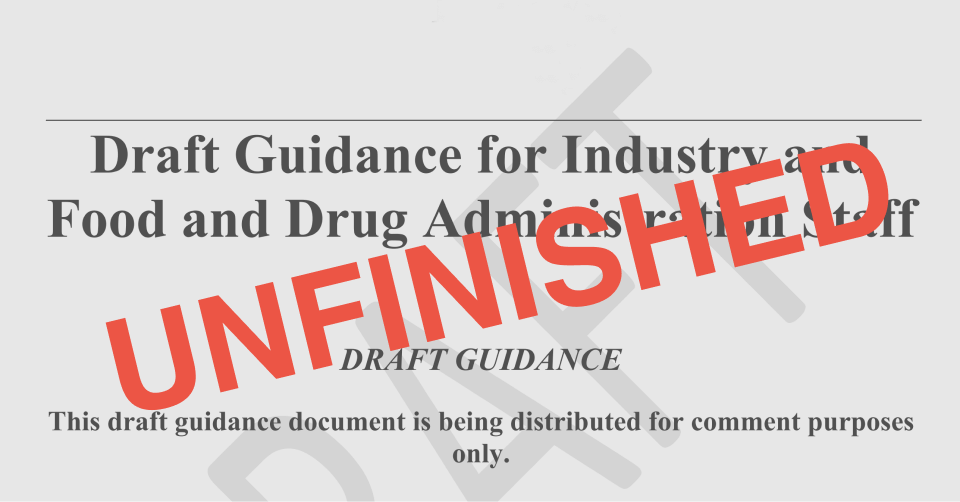 The FDA’s Center for Devices and Radiological Health (CDRH) always presents an ambitious guidance agenda under the fourth device user fee agreement, but wrapping up those drafts can be complicated even under normal circumstances. The following are five of the most critical draft guidances posted last year by CDRH, documents that will give industry some critical insight into the agency’s thinking on a range of vital subjects.

The Aug. 2, 2019, draft guidance for testing and labeling devices for safety in magnetic resonance environments runs 26 pages and covers a number of considerations, including magnetically induced torque. This draft initially came with a comment closing date of Oct. 1, 2019, but which was extended by 30 days. Among the requests seen in those comments was that the agency provide specifics with regard to the types of affected devices.

There were also questions about whether the scope of the draft includes equipment that is in the room with the MRI system, but the draft would require that manufacturers of orthopedic implants, cardiac electrophysiology devices, and insulin pumps test their devices for 1.5 and 3 tesla MRI systems. Even medical societies commented on the draft, one of which suggested that the FDA explicitly cite 7.0 tesla MRI systems as well. All things considered, the 26-page draft guidance could expand considerably by the time it reaches a final version, creating a significant compliance liability for makers of a wide range of devices.

The Sept. 24 draft guidance for patient engagement in device clinical trial design was a follow-up to an advisory hearing that took place two years earlier, which was the source of a series of recommendations on how device manufacturers can engage patient advisors during the design of clinical studies. Patient engagement can improve enrollment and thus thwart the ever-present hazard of study termination due to incomplete enrollment, but might also reduce loss to follow-up.

The FDA said a patient advisor cannot also be an enrollee in a study, although the advisor can be a patient/enrollee in a previous study of the same disease/condition or device type. The agency said these patient advisors do not act in a capacity that would make such interactions subject to the rules administered by institutional review boards (IRBs), although the draft suggests that sponsors can consult with IRBs and privacy boards to determine which statutory elements might apply to these interactions.

Some of the responses from industry suggest that device makers are wary of other legal requirements, such as the Anti-Kickback Statutes (AKS) and regulations pertaining to off-label promotion. The absence of any mention of these other legal hazards might seem to suggest to small companies – particularly those lacking full-time legal counsel – that there are no legal hazards other than those pertaining to FDA regulation. It has been argued that Sunshine Act reporting obligations might be triggered if that patient advisor is also a healthcare professional, but drug makers expressed the view that the FDA’s drug and biologics centers should have signed onto the draft as well, given the question of applicability to combination devices.

ASCA Not What the Pilot Can Do for You

The FDA’s Sept. 23, 2019, draft guidance for the Accreditation Scheme for Conformity Assessment (ASCA) program describes a pilot phase that is intended to evaluate whether device testing labs, and the entities that will accredit those labs, can provide a more streamlined approach to device performance testing. Scott Colburn, director of the CDRH Standards and Conformity Assessment Program, has done his best to cajole device makers to take part in the pilot for the collective good of industry. This program is part of the agency’s efforts to harmonize regulations via the use of international performance standards, but despite the lofty goals, there are concerns that the agency will end up second-guessing a testing lab’s results.

The proposal certainly drew interest from stakeholders as suggested by the more than five dozen comments posted to the docket, although there are several repeat sources of commentary. The use of ISO 17025 (directed toward testing and calibration labs) drew support from stakeholders, but one of the issues industry has with the draft is that it repeatedly describes scenarios in which the agency’s staff may request information about the lab’s testing results, even when the testing lab employs a standard recognized by the FDA. This kind of leeway would seem to run counter to the concept of a program that is designed to lessen the load on the FDA’s review staff, stakeholders argued.

September 2019 was a busy month for the FDA in terms of guidance publication, coming as it did at the end of the fiscal year, and another entry in this ledger is the draft guidance for the voluntary Safer Technologies Program (SteP) for devices. This program is for devices that do not qualify for the breakthrough devices program, and like the ASCA program, relies on consensus standards to reduce regulatory review times.

The STeP guidance applies to the agency’s devices and biologics centers, perhaps inevitable given that the Center for Biologics Evaluation and Research also reviews some 510(k) applications. The program is open to PMA, de novo and 510(k) devices, but could add significantly to the load on FDA staff, given that the draft promises early engagement with the agency on data development plans. The program would also offer prioritized review over non-qualified devices, but is limited to devices and combination products that treat life-threatening or irreversibly debilitating diseases and conditions.

One of the areas of ambiguity is that while the product would presumably not qualify as a breakthrough device, it would nonetheless have to offer “a significant safety advantage” over conventional devices and device-led combination products. The language in the draft is sufficiently lacking in specifics to provoke requests for additional clarity on what constitutes a significant safety advantage, or at least some examples of such. Whether this guidance is a bigger priority for the agency than other unfinished guidances from 2019 is unclear, but there are undoubtedly at least a few device makers who would take advantage of greater interaction and expedited reviews.

Some singers have made the case that love is better the second time around, and that sentiment may undergird the Sept. 27, 2019, FDA draft guidance for clinical decision support software. This draft is one of a number of elements on the FDA’s digital regulatory checklist, but unlike the agency’s forays into artificial intelligence and the pre-cert program for software as a medical device (SaMD), this is an effort that has a significant chance of bearing fruit in the current calendar year.

Before that can happen, however, the agency must wade through another round of comments, and must have better luck in answering those concerns than it did in connection with the first draft from December 2017.

In yet another nod to the necessity of regulatory harmonization, the FDA made use of the 2014 risk framework for SaMD published by the International Medical Device Regulators Forum. That aspect of the draft is not easily meshed with FDA regulations, in part because the draft covers both non-device CDS and CDS products that do qualify as devices, but for which the agency intends to offer enforcement discretion.

The FDA draft attempts to coordinate the various functions of a CDS product with the time frame in which a clinician makes use of the more or less prescriptive nature of the information provided by the CDS. One example of this dilemma is that the draft distinguishes between non-serious, serious and critical patient conditions, and the 27-page draft is consequently less clear than some stakeholders would prefer.

Where the FDA will ultimately land on some of the key questions surrounding the CDS draft is critical to the burgeoning digital health marketplace in the U.S., a fact of which the FDA is keenly aware. Whether digital health as an FDA priority will resurface as soon as the COVID-19 pandemic seems under control is the subject of speculation, but other matters digital are waiting in the wings, making the CDS draft a near certain bet as a priority for the FDA.