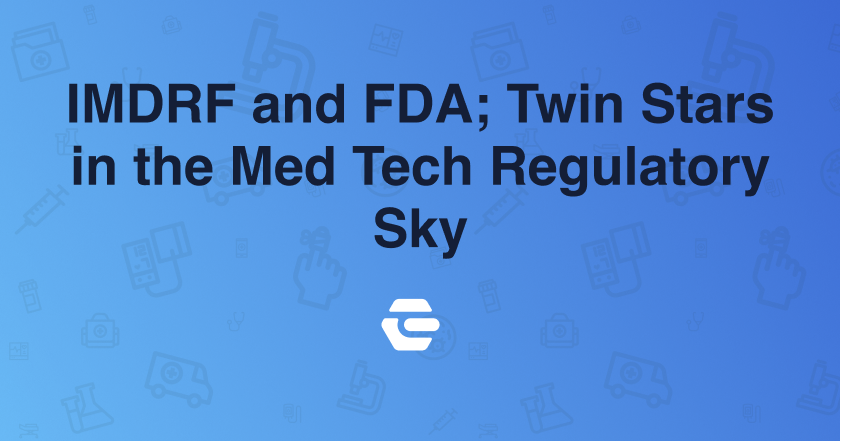 Enzyme Team
-
September 9, 2020
The Folks Behind the Brand

Regulatory harmonization for medical technology may strike some as sheer aspiration, although there are those who would characterize this in less ambitious terms, such as regulatory convergence. However one sees it, the two principal players in this space, the U.S. FDA and the International Medical Device Regulators Forum (IMDRF), often seem to be engaged in a vaguely symbiotic state of mutual gravitational capture.

Regulatory harmonization for medical technology may strike some as sheer aspiration, although there are those who would characterize this in less ambitious terms, such as regulatory convergence. However one sees it, the two principal players in this space, the U.S. FDA and the International Medical Device Regulators Forum (IMDRF), often seem to be engaged in a vaguely symbiotic state of mutual gravitational capture.

Unlike the two members of a binary star system, however, the FDA and the IMDRF will never end up in a cataclysmic fusion from which an oddly familiar new entity emerges. That doesn’t mean that the associated exchange of mass and energy fails to exercise an outsized influence on device manufacturers across the globe. It does mean, however, that device makers will continue to experience a conspicuous regulatory push-and-pull that is better managed proactively than reactively.

The IMDRF has its roots in the now-defunct Global Harmonization Task Force (GHTF), a group comprised of device manufacturers along with the regulatory agencies representing four nations and the European Union. The IMDRF website offers a glimpse into the history of the GHTF, listing 1992 as the year in which the task force was conceived. Early priorities for the GHTF were laid out the following year, with the primary tasks charged to three work groups, one each for good manufacturing practices, quality design systems, and comparisons of existing regulatory frameworks.

In 2012, the agency members broke away from the GHTF to form the government-only IMDRF, leaving industrial representation behind. The agencies believed that industrial representation created needless drag on harmonization, although bi-national cooperation was also in the air prior to this transition. The FDA and Japan’s Pharmaceuticals and Medical Devices Regulatory Agency (PMDA) had opened their own bilateral harmonization project in 2003, which went by the nom de voyage of Harmonization-by-Doing (HBD). Despite that both agencies have long been deeply invested in the IMDRF’s ambitions, the HBD program was still in play as recently as 2019.

The overlap between the FDA and the IMDRF covers a large number of considerations, although the IMDRF has authored no originating frameworks for quality management systems. The FDA’s influence on the IMDRF is difficult to miss, thanks in no small part to passage of the Medical Device Amendments to the Food, Drug and Cosmetic Act in 1976. This was the first explicit authorization for the FDA to regulate devices, and gave rise to Title 21, Part 820, which now is described as the FDA’s Quality Systems Regulation (QSR). Initially, however, these regulations were said to describe current good manufacturing practices (cGMPs) rather than the QSR.

A Federal Register notice in 1996 formalized the QSRs, with the introduction of design controls, which were statutorily imposed by the Safe Medical Devices Act of 1990. However, the notice also states that the FDA will “work with foreign countries toward mutual recognition” of cGMP requirements. Clearly the FDA was first to regulate devices in any formal fashion, while the IMDRF relies on ISO 13485 for its approach to quality management. 13485 came into being in 1996, providing a med tech-specific alternative to ISO 9001. It is indisputable that in the early years, the FDA was the trendsetter where medical device regulation is concerned, but the tide of influence has turned somewhat since the genesis of the IMDRF.

IMDRF Marks its Own Territory

Despite the FDA’s status as the indisputable legacy regulatory authority, the IMDRF has taken the lead on several fronts. In one example, the FDA adopted the IMDRF clinical evaluation guidance for software as a medical device (SaMD) in what critics say amounts to little more than a copy-and-paste job. When released as a draft guidance, this was not a particularly well-received move on the FDA’s part for several reasons, each of which highlight the procedural tensions that underly FDA adoption of non-U.S. standards. The Clinical Decision Support Coalition outlined its concerns with the draft via these observations:

The IMDRF seemingly attempts to address this last consideration with the disclaimer that the guidance “provides harmonized principles” for individual agencies to make use of per their own frameworks. “They are not regulations,” the IMDRF emphasized, although the question of the distinction between regulation and guidance has been the subject of considerable interest recently by the U.S. Department of Justice.

Another example of the IMDRF’s influence on the FDA is seen in the description of updated requirements for adverse event (AE) reporting. The FDA has been nudging industry toward e-reporting of adverse events under Medical Device Reporting (MDR) regulations for some time, including several changes to the content of eMDR form 3500. Some of these changes were subjected to a test run that commenced in mid-August 2020, and have since gone live.

More to the point is the reference to the harmonization of adverse event codes with IMDRF’s AE reporting terminologies. The FDA said all its code names have been renamed with the IMDRF versions, and the related testing and implementation dates are the same as those for the changes to the field set for form 3500. As can be seen in the section discussing previous changes, these alterations to the adverse event code set were in the works no later than March 2018.

The next few years are likely to demonstrate a further reliance on the FDA’s part on the IMDRF as seen in this list of current IMDRF consultations. One of the most recent of these is a project on risk classification for in vitro diagnostics, which includes a four-tier risk framework, a sharp break from the three-tier framework currently used by the FDA. Precisely how the FDA intends to square that with the statute governing medical device regulations in the U.S. is not clear, nor is it clear that the FDA intends to make use of this framework, given IMDRF’s stated position that its work product is anything but binding on member states.

As was previously highlighted, the FDA is forging ahead on its adaptation of Part 820 to align with ISO 13485, but there is also a current work item on the IMDRF agenda that delves into the question of regulation of artificial intelligence (AI). Developers will have to wait and see whether the FDA would adopt the IMDRF approach to AI and machine learning (ML) algorithms, particularly given that the FDA has yet to complete its regulatory proposal for software as a medical device (SaMD).

While it is not clear where things will land in connection with the FDA’s and the IMDRF’s overlapping regulatory agendas, the list of current work items on the IMDRF’s agenda makes clear that the IMDRF’s influence on the FDA will expand over the next few years. Device makers and software developers who want to stay ahead of these developments will have to pay rapt attention or risk being caught in the gravitational field of the wrong member of this binary regulatory system.