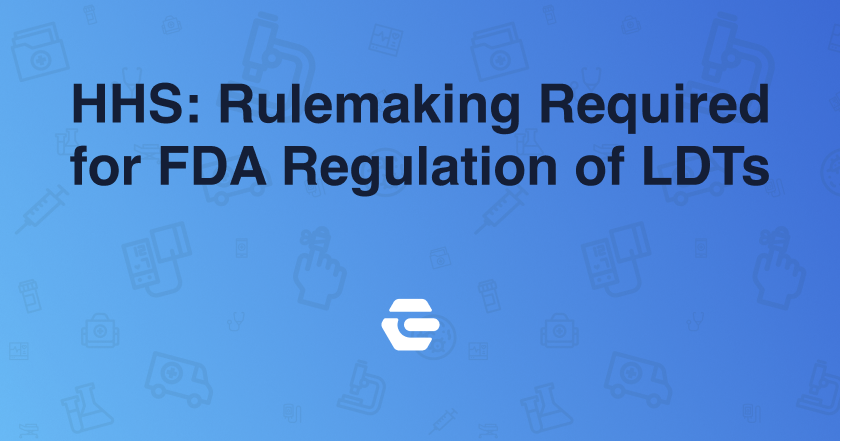 Enzyme Team
-
September 3, 2020
The Folks Behind the Brand

The U.S. Department of Health and Human Services has directed the FDA to drop its pursuit of regulation of lab-developed tests (LDTs) in a rescission order suggesting the agency first must go through the rulemaking process.

The U.S. Department of Health and Human Services has directed the FDA to drop its pursuit of regulation of lab-developed tests (LDTs) in a rescission order suggesting the agency first must go through the rulemaking process. The announcement flies against the views of at least one prominent former FDA commissioner, but several legal scholars believe there is a valid question as to the agency’s statutory authority in this area.

The Aug. 19 HHS order states that the policy change is part of the department’s response to the COVID-19 pandemic, and includes a determination that the notice-and-comment rulemaking process is a necessary first step for FDA regulation of LDTs. HHS also cited Executive Orders 13771 and 13924 in the statement, although these orders were drafted to fulfill significantly different objectives. EO 13771 is the February 2017 order directing federal government agencies to identify two rules for possible elimination for each new proposed rule, with an emphasis on the economic impact of any new rules and regulations. EO 13924, posted in May 2020, is a more made-to-purpose order, Section 4 of which states that directors of federal agencies should consider a rescission or waiver of regulations to aid in the pandemic response.

Former FDA commissioner Scott Gottlieb took exception to the rescission in a series of tweets that includes the statement that “it was long settled that LDTs were medical devices subject to FDA oversight.” That position echoes remarks Gottlieb made to a meeting of the American Clinical Laboratory Association in March 2018, in which the physician said there is a need for the FDA regulatory framework to keep pace with innovation in LDTs. He proposed that “the pre-cert approach to laboratory tests” might be one means of avoiding regulatory obsolescence, but said there is also a need for novel methods for determining a test’s analytical and clinical validity.

Not all agree that the case for FDA regulation is so readily answered, however. Two law professors wrote in the Yale Law Journal (YLJ) that the FDA lacks the authority to require emergency use authorizations (EUAs) for LDTs developed in response to the COVID-19 pandemic. The authors stated that Section 564 of the federal Food, Drug and Cosmetic Act (FDCA) is specifically directed toward medical products, which in turn are defined elsewhere in the statute as drugs, devices and biological products.

The authors, Barbara Evans of the University of Florida School of Law and Ellen Wright Clayton of the Vanderbilt University School of Law, said Section 564 – which was appended to the statute in response to the September 11 attacks – confers “no new powers for the FDA to regulate clinical laboratory services.” There are several aspects of the conduct of LDTs highlighted by Clayton’s and Evans’ argument, such as that lab testing:

While much of the essay in the YLJ is focused on the COVID-19 pandemic, the authors remind that this dilemma arose in 2015 when Paul Clement and Laurence Tribe, serving as counsel to the American Clinical Laboratory Association (ACLA), argued that the FDCA’s provisions “do not even mention laboratories or laboratory testing services and expressly disclaim any intent to regulate the practice of medicine.”

Clement, a former Solicitor General of the U.S. with a case history at the Supreme Court, and Tribe, a professor of Constitutional law at Harvard Law School, make note of the necessity of notice-and-comment procedures under standard federal government rulemaking requirements. They assert that the use of guidance in lieu of rulemaking is more than a mere technical faux paus, but is instead a violation of the Administrative Procedures Act (APA).

Two associations responded promptly upon the news of the rescission, including the ACLA, the response of which is focused principally on the effect of the rescission on testing for the pandemic. The press release mentions the necessity of the rulemaking process prior to the imposition of any premarket review requirements, but ACLA President Julie Khani only obliquely referred to the existence of regulation under the Clinical Laboratory Improvement Amendments (CLIA) of 1988. Khani observed that it is important that clinical labs possess the necessary training and expertise to conduct LDTs, “irrespective of the regulatory authorities under which they operate.”

The Association for Molecular Pathology was both more direct and more general regarding the question of statutory authorities. The AMP’s Aug. 21 statement made reference to regulation under CLIA, which AMP said “has a longstanding and successful history of promoting patient safety.”

AMP President Karen Weck highlighted the FDA’s regulatory requirements as an impediment to labs’ response to the pandemic in the first weeks, but the AMP noted that it has “long maintained” that FDA oversight of LDTs has hindered innovation and compromised patient access to “potentially lifesaving procedures.” The letter draws a clear line regarding whether these tests are services rather than devices, and AMP further made note of legislation by Sen. Rand Paul (R-Ky.) that would disarm the FDA, one of two bills currently in play on Capitol Hill as discussed in our blog from June 12, 2020.