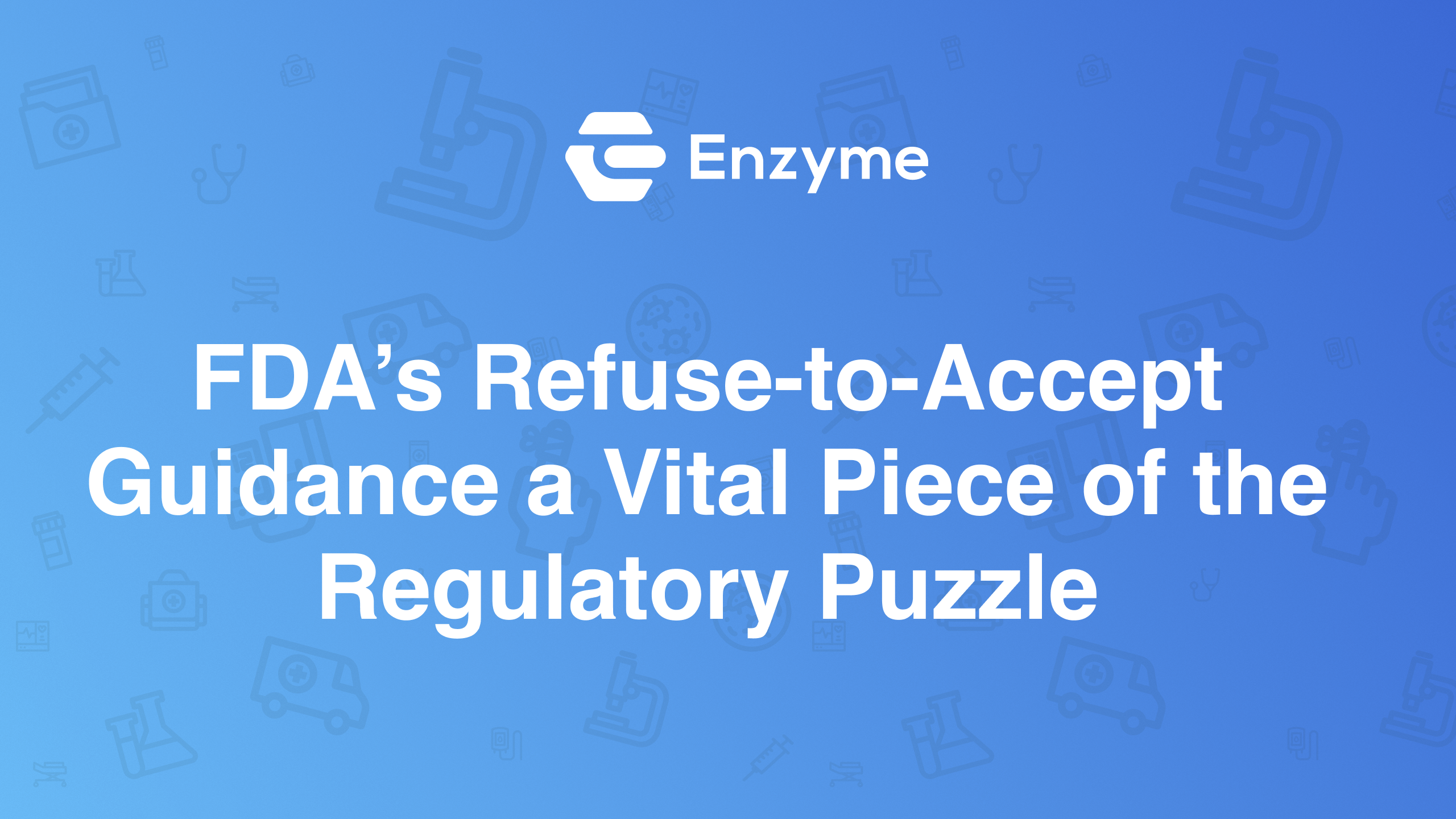 The FDA has reissued a 2019 guidance for the agency’s refuse-to-accept (RTA) policy for 510(k) applications, but even the 2019 edition is an overwrite of an existing acceptance review guidance. While the RTA policy is no regulatory novelty, we thought it might be helpful to our clients to take a fresh look this guidance, adherence to which could save manufacturers and developers a lot of time, money and trouble.

We hasten to point out to our readers that the RTA policy is administratively separate from the substantive review of the premarket application, and that the applicant must pay the associated user fee before the agency will begin the acceptance review. The FDA stated that this April 2022 update to the RTA policy includes some corrections of broken hyperlinks and a reminder that the overarching acceptance review policy is not limited to 510(k) products (the related policy for PMA devices is the subject of a separate guidance, however).

The RTA guidance for 510(k) devices states that the goals encoded in device user fee agreements suggests that an acceptance review is critical to the agency’s ability to meet those goals, a point to bear in mind as the new device user fee agreement (MDUFA V) is processed into legislation. A key antecedent to the modern understanding of the RTA policy is a 2011 report by the FDA on 510(k) reviews. Among the problems cited in that report were:

There are several key timelines associated with the RTA policy, such as that the acceptance review should take no longer than 15 calendar days. The applicant then has 180 days to provide a complete response, after which the agency will deem the application withdrawn if the sponsor fails to respond. Assuming the applicant responds to the refusal, the clock on the acceptance review begins anew with another 15-day turnaround time.

The question of timing does not end there, however. Under this guidance, the application will be deemed to be under substantive review if the agency does not complete the RTA review within 15 calendar days. In this scenario, the substantive review clock start date will be the date of the information most recently received from the sponsor as part of the RTA review. As many as 15 days under the RTA review process can be counted toward the 60 calendar days that are part of the substantive interaction goal for the sponsor and FDA.

The FDA reviewer is not permitted to refuse to accept a 510(k) application if the application fails to provide enough information to make a determination regarding substantial equivalence. Developers and manufacturers are advised to explain any discrepancies from the review checklist found at the end of the guidance, however. Section VII of the guidance offers a series of preliminary questions for the applicant, such as whether the product is a combination product with a device constituent part. If the device component of a combination product does not seem to provide the primary mode of action (PMOA), the application may be referred to another FDA center for review.

There are several other regulatory questions for sponsors to take into consideration before filing a 510(k), such as whether:

If one or more of these conditions apply, the agency may refuse to accept the application regardless of the completeness of the application. While there is a checklist of items needed for acceptance, there are a number of non-checklist items that can also lead to a refusal to review, such as when the application is too disorganized to facilitate a review. The guidance states that a poorly written application may be refused as well.

Despite that the RTA review is not a substantive review, the reviewer may nonetheless declare that the results of a particular test may not suffice to support a determination of substantial equivalence. There are several other items that qualify as “observations” under the acceptance review that could prove problematic upon full review of the application, although these would not suffice to cause the acceptance reviewer to reject the application. Those observations would be provided in an addendum.

One of the key considerations regarding the RTA process is that the checklist varies depending on the type of 510(k) application. There is the risk that a special 510(k) may be converted by the RTA reviewer into a traditional 510(k), in which case the application is likely to be rejected during the acceptance review. In this instance, the reviewer would highlight the information needed to complete the acceptance review. With regard to abbreviated 510(k)s, we remind our clients that the FDA has developed an alternative pathway, the safety and performance-based pathway, which allows the manufacturer or sponsor to apply for clearance based on documented compliance with objective performance criteria. This pathway is generally limited to well-understood device types, however.

This 102-page guidance provides checklists for each of the standard 510(k) applications, and so there are far too many items to enumerate here. However, there are elements common to each, such as that the sponsor cite any applicable guidances, including device type-specific development guidances. Objective performance standards are also among the items that appear on each checklist, although the checklists provide space for data regarding standards not formally recognized by the FDA. The checklist includes formatting requirements, such as a table of contents and page numbers, along with attestations that any clinical trials cited in the application are properly registered.

While there may be the occasional conflict between sponsors and the FDA as to the appropriateness of the items appearing in these checklists, adherence to them can get an application off on the right foot. As experienced developers and manufacturers know, a good start increases the odds that a successful application will be the end result, an outcome that is a boon to patients and device makers alike.