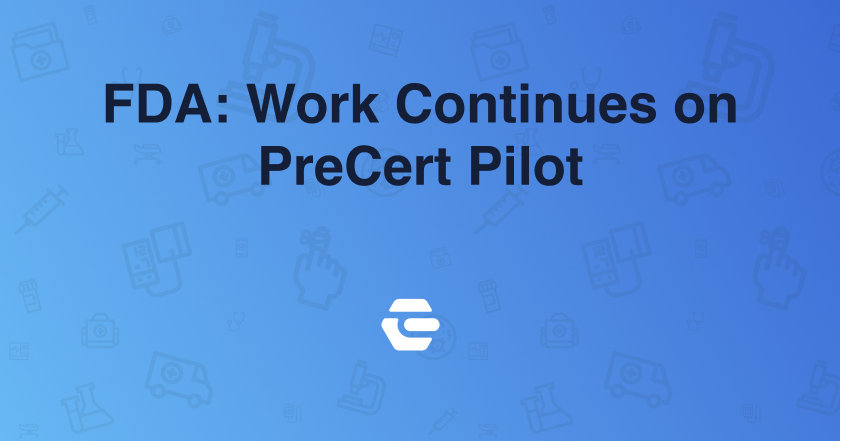 The FDA has posted an update for the PreCert program for software as a medical device (SaMD), providing software developers some insight into the agency’s current thinking on the program. The COVID-19 pandemic has imposed some drag on the program, although the FDA indicated it intends to expand access to the PreCert pilot for additional test cases.

How quickly those additional test cases will be added is unclear, and there is a lingering question as to whether 2021 will come and go before a fully developed PreCert framework is in place despite the FDA’s announcement regarding the agency’s new Digital Health Center of Excellence (DHCE).

The PreCert program kicked off in July 2017 with the publication of the agency’s Digital Health Innovation Action Plan, although there were controversies over whether the PreCert program as initially envisioned was on solid statutory ground. An Oct. 10, 2018, letter from three members of the U.S. Senate posed this question, but the FDA subsequently appended the de novo premarket review mechanism to the PreCert program, which presumably laid any such questions to rest for the time being.

As indicated by the agency’s tracking sheet, the September 14 update was the first announcement in connection with the program since mid-July 2019, when the FDA posted the previous mid-year update. Initially, the pilot program was to have run little or no longer than calendar year 2019, but as is often the case with novel regulatory regimes, the development and implementation phases have run past these self-imposed deadlines.

While enthusiasm among developers for the PreCert program was high at the outset, developers may now be asking what benefit they might derive from taking part in the pilot program. The latest update highlights several issues that may take some of the sheen off the program, such as:

The September 2020 update stated that the first (and still current) version of the working model will be known as WOMO 1.0 going forward, although this expression is nowhere to be found in the 2019 update. Despite the apparent delay, the FDA said the COVID-19 pandemic highlights the need to enable rapid access to products that could be useful in the pandemic. The report lists a number of objectives that must be met before larger scale beta testing can be undertaken, but conventional premarket review mechanisms will be used for SaMD filings in the meantime.

One of the top-line findings to date is that the excellence appraisal can be handled via remote pre-work and the filing of objective evidence, in lieu of the originally planned multi-day, in-person visit. In the early days of the program, the FDA was allocating five days of on-site interaction with the developer.

The excellence appraisal still relies on the use of key performance indicators (KPIs), although the agency had made clear early on that it would not make public the KPI reports for each organization outside the requirements of the Freedom of Information Act. As matters stand, the agency has assembled an initial set of KPIs and other measures of organizational performance, although the September 2020 update discloses little to suggest that the agency has fully settled on a specific list of KPIs and other measures.

In its work-up of the program to date, the FDA matched the streamlined review aspect of the PreCert framework with conventional premarket review programs, but this comparison has highlighted a few issues. There were some inconsistencies in the type of information needed from masked software review elements, which will have to be resolved in order to achieve an outcome similar current premarket review practices. These inconsistencies will force the FDA and the pilot program participants to find methods for standardizing the masked software review elements.

The agency will also have to devise a method by which developers can consistently define their SaMD products using the SaMD risk categorization framework developed by the International Medical Device Regulators Forum (IMDRF). Another task awaiting the agency and the companies in the pilot is development of methods for collecting data on real-world performance, which will be critical if the program is to achieve the stated goal of providing a total product life cycle (TPLC) approach to SaMD.

The report states that refinements are needed across all aspects of the program in order to:

There are some additional objectives as well, such as what sort of criteria might be used to demonstrate that an organization has sustained its excellence appraisal status, as well as whether a reappraisal is in order. The FDA said it will consider petitioning Congress for legislative authority to implement this program as a novel regulatory pathway for SaMD, once the next phase of the program is underway. Precisely when all this will be accomplished is not described, but that information is probably unknown even to the FDA, given the continuing demands of the COVID- 19 pandemic.