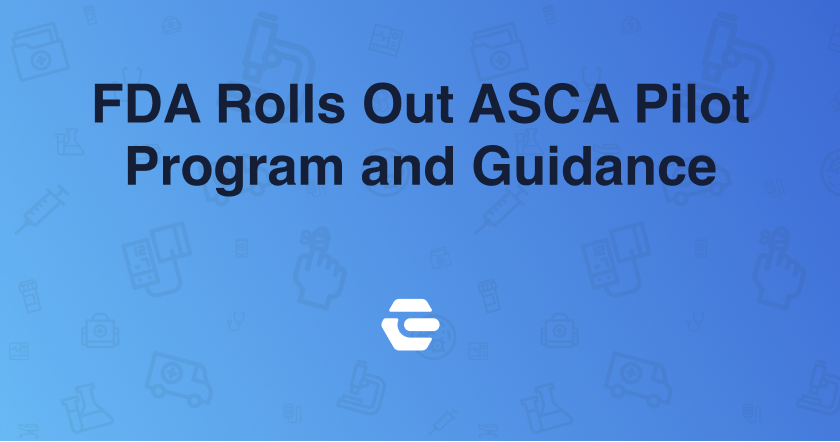 The need for regulatory harmonization for medical technologies has fueled a number of changes at the FDA, but one of the more important of these may be the Accreditation Scheme for Conformity Assessment (ASCA).

This program is also designed to provide a more streamlined approach to marketing authorization in the U.S., but the agency and program participants have a large task in front of them before this program evolves into a mature, self-sustaining system.

The ASCA pilot program was officially live as of Sept. 25, 2020, according to the main ASCA program webpage, which also states that the pilot “potentially decreases the burden of individual premarket submissions.” Participation is entirely voluntary, but the hope is that companies can reduce the number of FDA requests for additional information regarding device performance by obtaining a declaration of conformity (DoC) to an FDA-recognized standard.

The implementation of this program is a multi-step process that begins with a request by an accreditation body (AB) to the FDA for recognition of their capabilities for assessing a testing lab’s operations. The agency will characterize the scope of that recognition upon completion of the application process, which includes an examination of the standards and methods for which that AB will assess a testing lab.

The overarching standard for ABs is ISO/IEC 17025, which lists the general requirements for determining the competence of testing and calibration labs. However, there are several ASCA program-specific requirements for ABs, including that they are signatories to the International Laboratory Accreditation Cooperation Mutual Recognition Agreement (ILAC MRA). This program is intended in part to foster the use of international standards with an eye toward lowering technical barriers to trade.

The FDA is limiting AB admission to the pilot to those located in the U.S., but participating ABs will not be liable for any fees. However, ABs will have to fulfill a number of requirements listed in section D of appendix A in the ASCA guidance. Among these are that the AB must:

It should also be noted that the agency reserves the right to conduct periodic audits of ABs. Once the program has been populated with an initial roster of ABs, the FDA will turn around subsequent applications within 60 days, although the agency did not indicate how many ABs will be needed before it will have to comply with this deadline. The guidance states that the FDA may withdraw recognition of an AB at any time.

Testing labs will be accredited by ABs under ISO/IEC 17025, but they will send documents related to test results directly to the manufacturer, not the FDA. Unlike the AB prong of the program, testing labs located outside the U.S. can take part, as can those that are part of a device manufacturer’s operations. There is no stated limit to the number of labs that can take part, but operators of these labs should start the reaccreditation process at least six months prior to the end of an existing accreditation.

The final guidance for the ASCA pilot is adjusted on several points compared to the draft. While both versions state that testing laboratories must undergo a reassessment by the AB every two years, the draft stated that the FDA intended to take part in these reassessments as an observer. The final guidance carries this provision only in connection with level 2 audits, however. A level 2 audit is the intermediate audit mechanism that is invoked when a minimal, level 1 audit would not suffice to ensure the lab is in compliance with the terms of the pilot, while a level 3 audit is undertaken only for issues “of highest concern,” the guidance stated. A level 3 audit would be conducted by the FDA either in person or via remote auditing technology.

Another difference between the two versions is seen in the provision dealing with internal audit reports. The draft indicates that the agency may request a copy of reports for internal testing laboratory audits, either directly from the laboratory or from the AB that accredited the lab, even in the absence of any indication of a problem. That provision is absent from the final guidance.

The agency also posted the ASCA guidance for safety and performance for medical electrical equipment and laboratory equipment, which lists several consensus standards, the bulk of which fall into the IEC 60601 series. The testing lab is also required to inspect the manufacturer’s risk management file for its compliance with the 60601 series of standards but only to the extent necessary to assess that compliance. The FDA emphasized the limitation of this inspection by noting that a testing lab will make no judgments as to the adequacy of the manufacturer’s risk management activities, or of the manufacturer’s determination of the acceptability of an identified risk.

The FDA has recognized other standards for use in premarket submissions, but any standards not specifically called out for the ASCA pilot will be excluded. Given the complexity of this program, the agency hosted a 90-minute dial-in webinar on Oct. 22, 2020 for anyone to join and reviewed the highlights of the program per the final guidance and included a summary graphic of the program detailing interested parties’ interactions and roles.

This program is still in its infancy, but it was part of the agreement with industry that led to the FDA Reauthorization Act of 2017, the enabling legislation for the current device user fee agreement. How quickly this program will come to maturity is impossible to forecast, but industry’s interest suggests that the ASCA program will sooner or later provide another tool for smoothing out the path to the U.S. market.