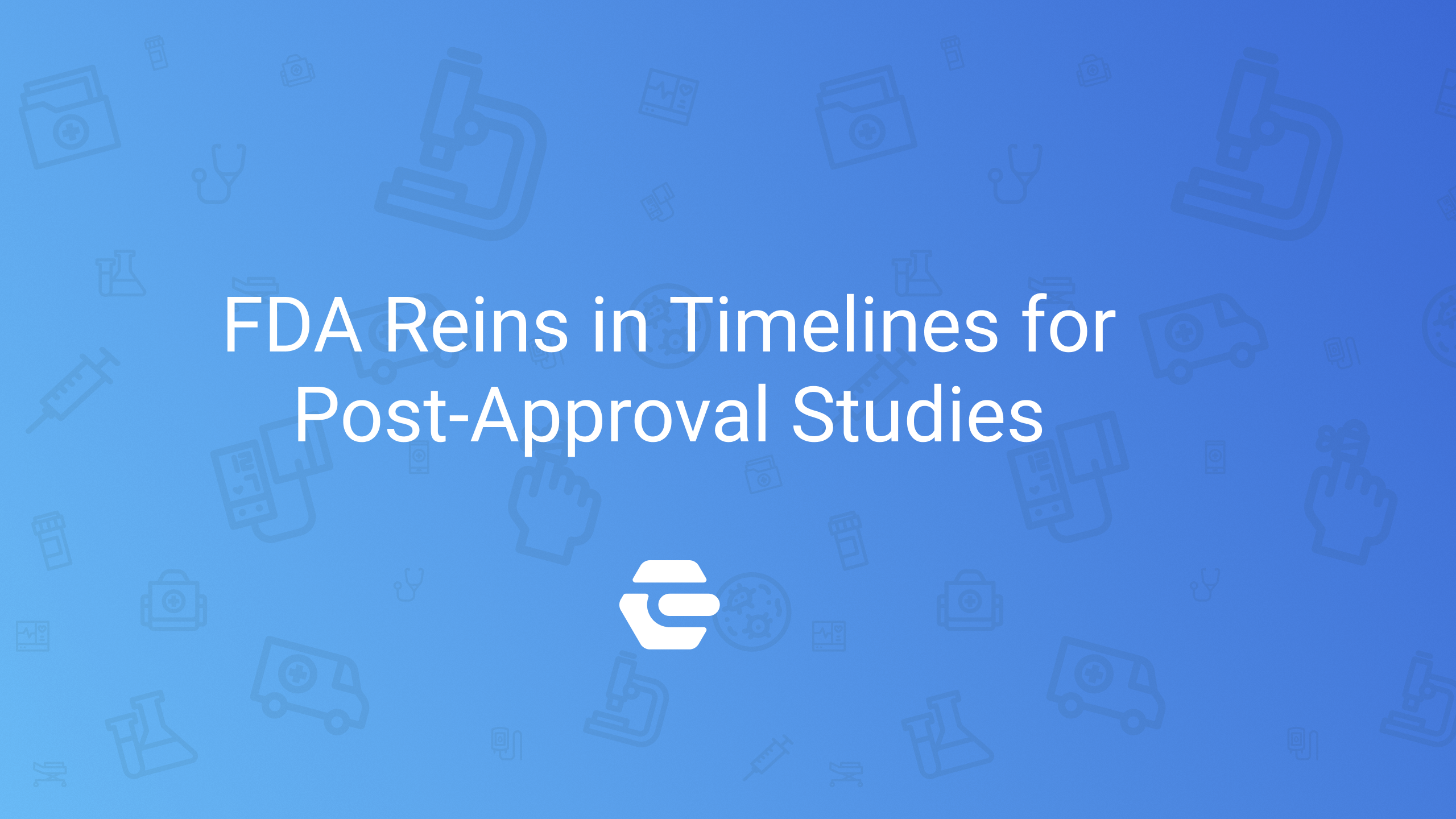 The FDA’s Center for Devices and Radiological Health (CDRH) began in May 2021 to catch up on workload for draft guidances, such as the May 27 draft guidance for post-approval studies (PAS) for PMA devices. This draft was released concurrently with a draft for Section 522 postmarket surveillance studies, and as is the case for the Section 522 draft, the PAS draft tightens up several timelines that will force companies to be on the ready to implement these studies.

As readers of our blog know, the latest draft guidance for Section 522 studies, as we previously discussed, cuts two timelines from six months to 60 days. A similar dynamic is at play in the PAS draft, which indicates that a protocol-pending status would be applied to a PAS proposal under review when fewer than 60 calendar days have elapsed since issuance of the approval order. In the standing guidance from 2009, the elapsed time is six months, and the same change – from six months to 60 days – is in place for the protocol overdue status category.

There are other recommended deadlines listed in the new draft that did not appear in the 2009 guidance, adding to the air of greater FDA focus on compliance. These requirements, which are based on time elapsed since approval of the study protocol, include:

The draft seems to allow the sponsor some leeway on the data analysis plan for primary endpoints, requiring only a high-level description of these for approval of the plan. The study proposal should also include a statistically justified sample size calculation, where applicable. Neither document addresses the question of the types of studies that may be required, although the FDA is not explicitly opposed to the use of registries for this purpose.

This apparently is not entirely compulsory, however, as the sponsor may receive an approval with only an outline of the PAS. In this case, the sponsor must complete the PAS protocol in its entirety within 30 days of approval, and must file the study plan as a PMA supplement, a requirement found in the 2009 guidance as well.

One of the changes the FDA has proposed with the new draft is that its review of interim PAS reports should be completed within 30 calendar days, while the 2009 guidance is silent on the agency’s turn-around times for these reports. Another difference is that the draft states that the agency may undertake enforcement or compliance actions if the interim report is either short on data or the data presented by the sponsor raise questions about the device’s safety and/or efficacy.

The 2009 guidance states that the terms of the guidance may apply to post-approval studies for both humanitarian device exemptions (HDEs) and product development protocols (PDPs). The 2021 draft offers the same observation about HDEs, but makes no mention of PDPs. The PDP for class III devices is rarely used, however.

There are several differences in the language of the 2021 draft and the 2009 guidance in the section for the FDA’s evaluation of a final PAS report. These include that:

These last two points are not included in the 2009 guidance. Both documents state that a PMA supplement may be necessary if the results of the PAS suggest a need for a change to the product label. Another feature in common is that the FDA may initiate a withdrawal of approval of the PMA if the sponsor has not fulfilled the study requirement and cannot provide a valid justification for the lapse. The draft provides a few details not found in the 2009 guidance about a PAS that is not progressing according to plan, such as how to address “data inadequacies” or an inability to complete the study as designed.

In such instances, the agency and the sponsor may undertake a redesign of the study, which would be accompanied by a new set of timelines for fulfillment. The sponsor is advised to stay in touch with the FDA about any studies that are seemingly in danger of not fulfilling the stated objectives.

IMDRF Combines Both Study Types in One Guidance

The International Medical Device Regulators Forum (IMDRF) finalized its work on a guidance for post-market clinical follow-up (PMCF) studies in March 2021, which encompasses the themes of both the FDA’s Section 522 and PAS drafts. The IMDRF guidance is applicable to both the need to more fully characterize the device’s benefits and risks, and to “address new concerns arising from post-market adverse event trends.” However, the IMDRF is not prescriptive about the term of such studies.

While the FDA document makes no direct reference to the type of study that could fulfill the PAS requirement, the IMDRF states that a continued access protocol and a registry can fulfill the related requirements. The IMDRF policy also allows the use of relevant retrospective data from patients previously exposed to the device to serve as a source of data, although it is not clear whether the intent is for such a source of data to serve solely as a control arm in a two-arm study. Interestingly, this guidance mentions the use of case-control studies along with other study types.

While the FDA has publicly declared its intent to allow more routine use of real-world evidence (RWE) in the years since passage of the 21st Century Cures Act, the PAS draft makes no mention of such data sources. The IMDRF guidance is more explicit about such data sources, listing administrative data and data from health or electronic records as possible sources of RWE that could fulfill these purposes.

A point worth mentioning is that the IMDRF cited data protection concerns for these studies, a consideration not raised in the FDA guidances. This is becoming an increasingly problematic area for developers, given the differences between the European Union’s General Data Protection Regulation (GDPR) and the U.S. Health Insurance Portability and Accountability Act (HIPAA). The alert device maker is also aware that several U.S. states have promulgated their own privacy requirements, creating a patchwork of privacy requirements that could quickly ensnare the unwary device maker as they enroll a PAS.