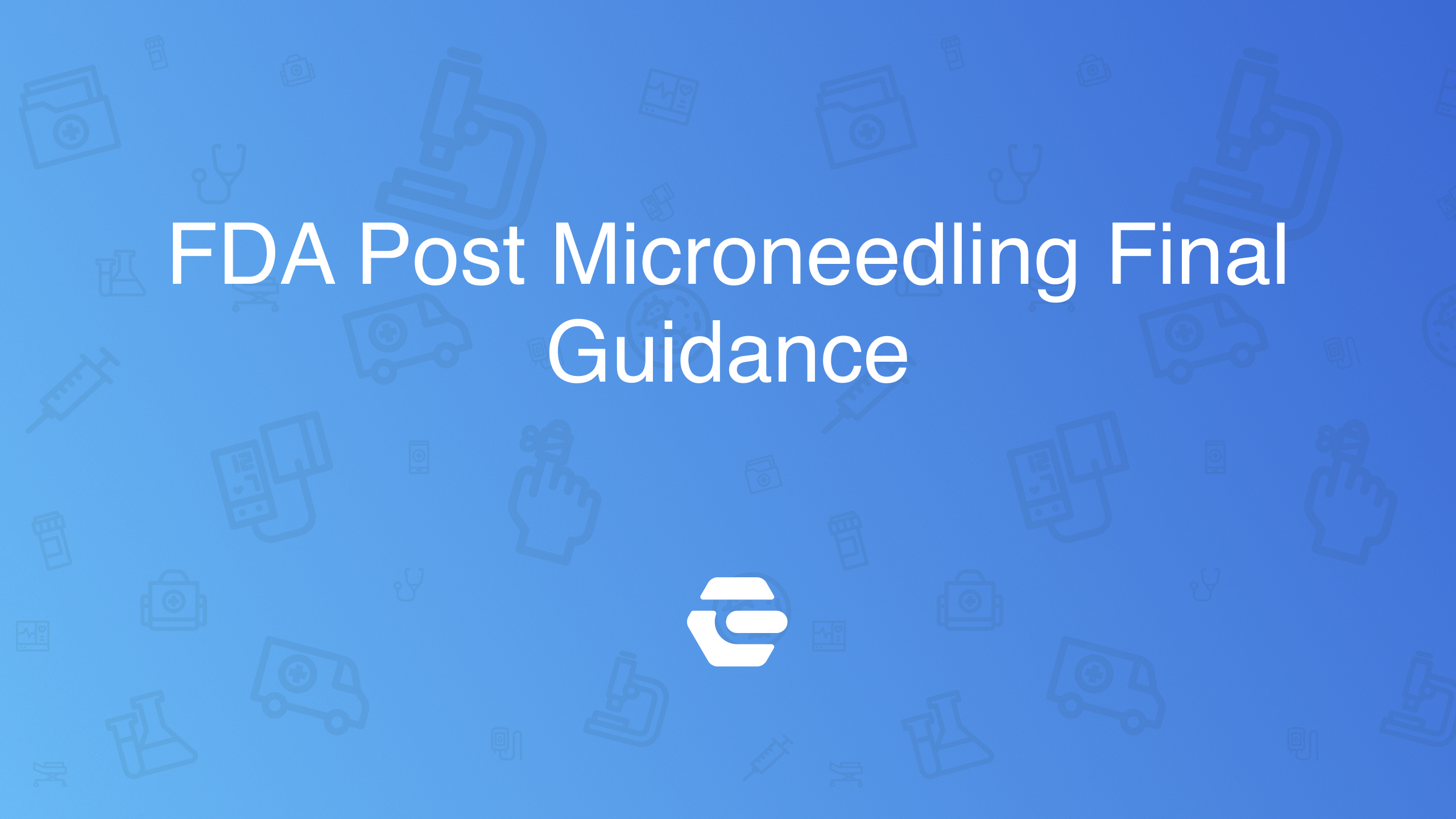 The FDA recently finalized a guidance for microneedling devices that applies a class II, moderate-risk designation to any such device that affects the epidermis or the dermis. Any device that penetrates the living layers of the skin accompanied by structure/function claims would be designated a class II device.

The FDA recently finalized a guidance for microneedling devices that applies a class II, moderate-risk designation to any such device that affects the epidermis or the dermis, a document three years in the making. There are a number of interesting considerations encoded in this guidance, one of which is how the agency determines what distinguishes a class I from a class II device.

The scope of the microneedling guidance is limited to devices that consist of an array of needles, pins, or micro-protrusion tips, which can be of varying lengths and degrees of sharpness. This includes items such as dermal and microneedle rollers and other similar products for cosmetic use. Combination products are excluded from the scope of the guidance, as are acupuncture needles and tattoo machine needles.

What is not clear is whether it was the agency’s intent to allow the Bellus de novo petition to play out before finalizing the guidance. In any event, there was a demonstrated demand for regulatory clarity, given the four entries for 510(k) clearances under the related product code, QAI. The first of these is dated July 19, 2018, four months after the date of the approval order for the Bellus de novo.

Microneedling devices labeled for aesthetic use are subject to the special controls featured in Part 878.4430, a subset of the surgical devices section. The regulation imposes several requirements with regard to collection of non-clinical performance data, including:

There are several other requirements as well in Part 878.4430, such as data demonstrating device sterility and biocompatibility. Labeling must include a summary of the device’s technical parameters, such as needle length and geometry, along with information on maximum penetration depth and puncture rate.

Lack of Clarity Regarding Biocompatibility

Neither the guidance nor the regulation is specific as to the standard recommended for demonstration of biocompatibility, an interesting omission given the large number of FDA-recognized approaches to biocompatibility. The October 2020 draft guidance providing select updates for devices that come into contact with the skin seems an unlikely candidate as this draft is explicitly limited to a series of fabrics and other materials. A more likely relevant guidance is the September 2020 final guidance for the use of ISO 10993 for evaluation of risk and testing, which includes a section (see page 51) addressing devices that come into contact with intact skin, or with breached or compromised skin surfaces.

Class I for Dermabrasion Devices a Contradiction?

Conversely, the March 1999 guidance for dermabrasion devices deems such products class I devices when indicated for dermabrasion, scar revision, and tattoo removal. Given that the microneedling guidance seems to separate class I from class II principally by the layers of skin which the device penetrates, a class I designation for dermabrasion would seem to fly against observations made by the Mayo Clinic that removal of a tattoo might require the use of a rotary dermabrasion device. In this use, the tattooed skin is “sanded down to deeper levels” below the stratum corneum. A website that serves as a clearinghouse for dermatology providers states that tattoo ink that does not penetrate the dermis may fade over time. Precisely how tattoo removal avoids the structure/function question for class II devices under FDA regulations is not clear.

Previously, we reviewed the FDA’s latest attempt to forge a coherent policy on intended use, and the microneedling guidance oddly strays into that regulatory question. We say “oddly” because the latest draft rule for intended use is just that; a draft rule and explicitly not in final form and consequently not in force, at least not in theory.

Thus, the inclusion of the intended use problem in the microneedling guidance would seem to resurrect the debate over why the agency sometimes views a draft rule or guidance as a final rule or guidance. The problem is difficult to ignore, given that the agency’s notice for the microneedling final guidance makes reference to the draft intended use rule in a footnote, which states little more than that any relevant source of evidence can be used to determine a product’s intended use.

The 2017 draft microneedling guidance states that the device’s design and technological characteristics are “relevant sources of information” regarding intended use, a provision that has a parallel in the draft intended use rule. The FDA tweaked this section in the final microneedling guidance to state that design and technological characteristics are factors in determining whether the article is a class II device under the Food, Drug and Cosmetic Act.

A passage in the final not found in the draft states that information regarding design and technological characteristics may be found in a variety of places, such as product’s specifications, directions for use, or “other materials.” Both versions also state that any claims or statements – written or oral – made by the manufacturer or its representatives may be used to infer intended use, which is also discussed in the draft intended use rule.

One difficulty for the manufacturer of a microneedling device is that the draft intended use rule indicates that product distribution can be a factor in determining intended use. This aspect of the question revolves around the implications of distribution of the product to a medical or other clinical practice that does not ordinarily serve a patient/client that would be in need of the product in question.

Granted, the intended use draft couches the question of distribution in a discussion of a pharmaceutical agent, but this provision, along with the draft rule’s discussion of the inference of device size, leave the manufacturer of a microneedling device with an unexpectedly complex set of compliance considerations. While such considerations might be only rarely provoked, they nonetheless could prove more than moderately problematic if they do, indeed, arise.