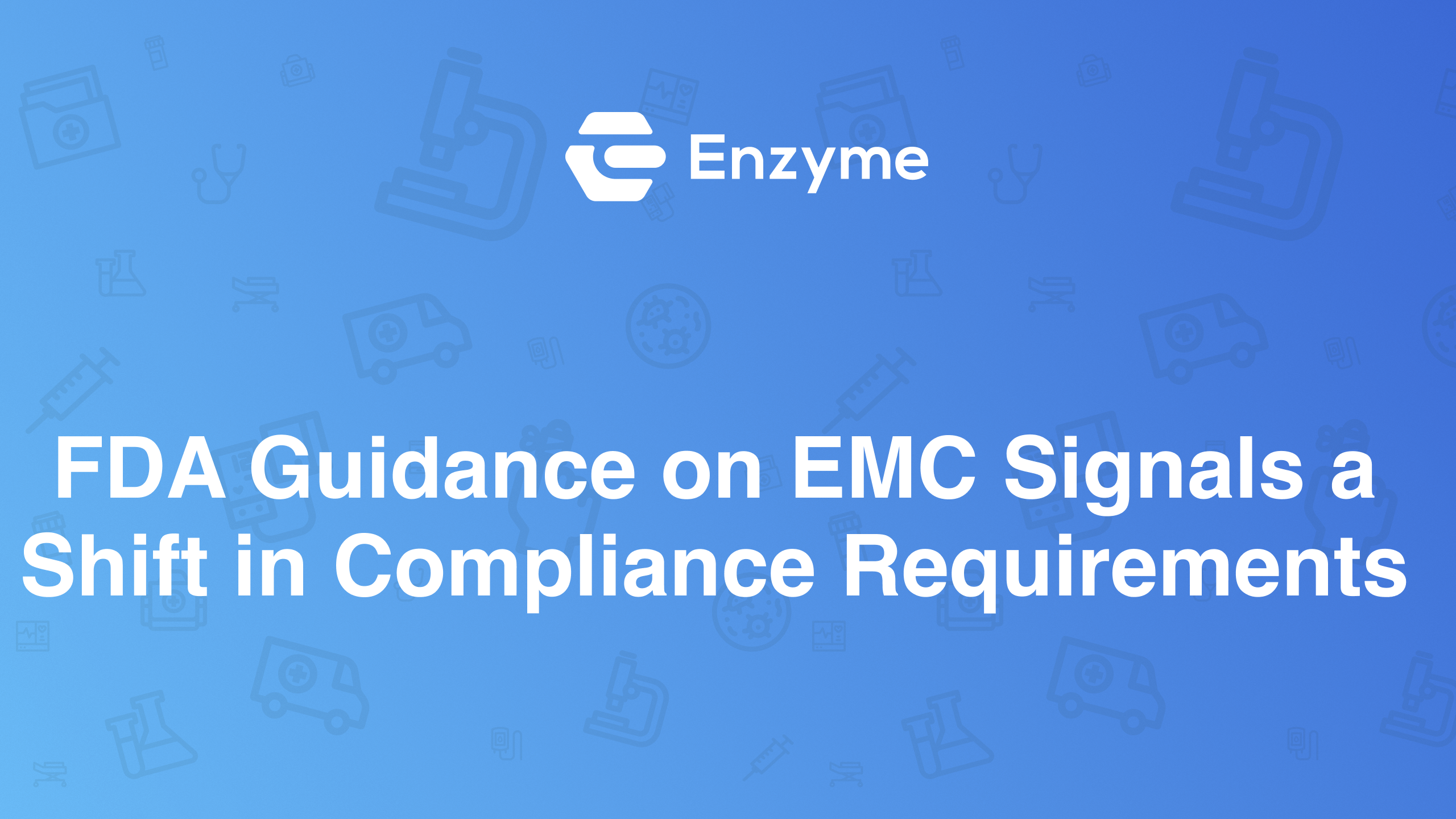 FDA Guidance on EMC Signals a Shift in Compliance Requirements

The FDA’s latest guidance for electromagnetic compatibility (EMC) replaces a guidance from 2016, but much has changed in the world of digital health in six years and the agency is trying to keep pace. This is reflected in the fact that what was a six-page document has grown to a 20-page guidance that will inform the agency’s expectations for premarket applications for the foreseeable future.

This guidance describes what is essentially an exercise in risk management for the affected products, which is generally consistent with the FDA’s overall approach to risk management. Section J of the guidance highlights the agency’s concerns about the risks of EM interference, listing several sources of emissions that are not included in FDA-recognized standards. Cellphones with G5 capability are on the list, as are some electronic security systems.

The terms of this guidance are in force for all device types as of Aug. 5, 2022, with the exception of in vitro diagnostics (IVDs), which will be exempt until June 2023. Developers of both digital health products and conventional devices may see the guidance as suggestive of a much greater interest in EMC on the FDA’s part than some in industry might have realized. The guidance applies to devices with electrical and/or electronic functions, including sensors, which implicates products such as digital devices intended for detection of vital signs. Also implied are devices used to facilitate virtual and remote clinical trials.

The scope of the guidance includes a number of application types, such as:

CBER is the coauthor of the guidance with the Center for Devices and Radiological Health (CDRH), and the products regulated by CBER that are within the scope of the guidance are regulated under Section 351 of the Public Health Services Act rather than by the Food, Drug and Cosmetic Act.

One of the chief points of interest in this guidance is that it provides much more granularity to the definition of EMC than the 2016 version. That definition now is the ability of a device to function safely and effectively in its intended electromagnetic (EM) environment, which includes immunity to EM disturbances without introducing excessive EM disturbances that could interfere with other equipment. In turn, immunity is defined as the ability to protect against unacceptable degradation due to EM disturbances, such as would be caused by radio waves, power surges, radio-frequency (RF) disturbances and electrostatic discharge (ESD).

There is some nuance in this, however, as the guidance specifically highlights the difference between immunity to transient versus continuous EM exposure. The difference is that the manufacturer may have to demonstrate reliable device performance only after the test disturbance has ended for transient EM episodes. In contrast, a demonstration of immunity for a continuous EM episode requires that the device perform reliably both during and after exposure to the test EM disturbance.

One key point about EMC test standards is that the benchmarks for immunity pass/fail criteria may not be sufficiently specific to address some of the device’s function modes and indications for use/intended use. The guidance offers the example of a ventilator that is used for both adult and neonatal patients, a difference that may require testing to address the different physiological characteristics of these patient populations.

The section of the guidance for device configurations and functions tested is one of the key areas, as it lists a number of recommendations that will be evaluated during an FDA review of the application. This section recommends that a description of the testing of the finished device configuration be included with the application, but the agency will consider testing data drawn from a different model or version of the device. However, any differences in intended use or indication for use may require that the applicant device be tested anew, as is the case for any modifications that might affect EMC. The FDA also stated that it would prefer to see new testing if the previous testing regime was conducted with reference to a standard that has been superseded or replaced.

The manufacturer or developer will have to keep several considerations in mind when determining the appropriate device configuration for testing. Among these considerations (and the related recommendations) are:

The environment for the device’s intended use has considerable bearing on the type of testing, as do considerations such as whether the device is an implant. As might be expected, ANSI/AAMI/IEC 60601-1-2 applies to EM disturbances and is on the FDA’s list of recognized standards. However, the guidance states that laboratory equipment and in vitro diagnostics are not within the scope of 60601-1-2, a statement which applies as well to active implantable medical devices (AIMDs). This standard is used to evaluate device safety only, however, and applications may have to recite compliance with standards such as 60601-4-2 to assess whether device performance is immune to EM fields.

Regarding laboratory equipment and in vitro diagnostic tests, the FDA partially recognizes IEC 61326-1:2020 and IEC 61326-2-6:2020, although acceptance criteria will have to be adjusted for the device’s function(s) and intended use. Manufacturers can use 60601-1-2 for any non-implanted components of AIMDs, while ISO 14117 is available for the implanted component of AIMDs such as cardiac electrophysiology devices.

The guidance goes into some detail regarding the intended use environments, and the FDA pointed out that the rapid pace of technological change makes it difficult for standards developers to maintain up-to-the-minute relevance with regard to the sources of EM energies in these various settings. While 60601-1-2 is broadly applicable to both home healthcare and professional healthcare settings, the guidance states that nursing homes are seen as a professional healthcare environment in large part because of the presence of professionally trained staff. Conversely, an ambulance is listed as a home healthcare environment due to similarities with homes in terms of EM energy sources.

These seemingly counterintuitive designations of home health versus professional health environments are a good demonstration of why it is vital for developers and manufacturers to examine this guidance closely at the very outset of the product development phase, and immediately for any development projects that are already underway.