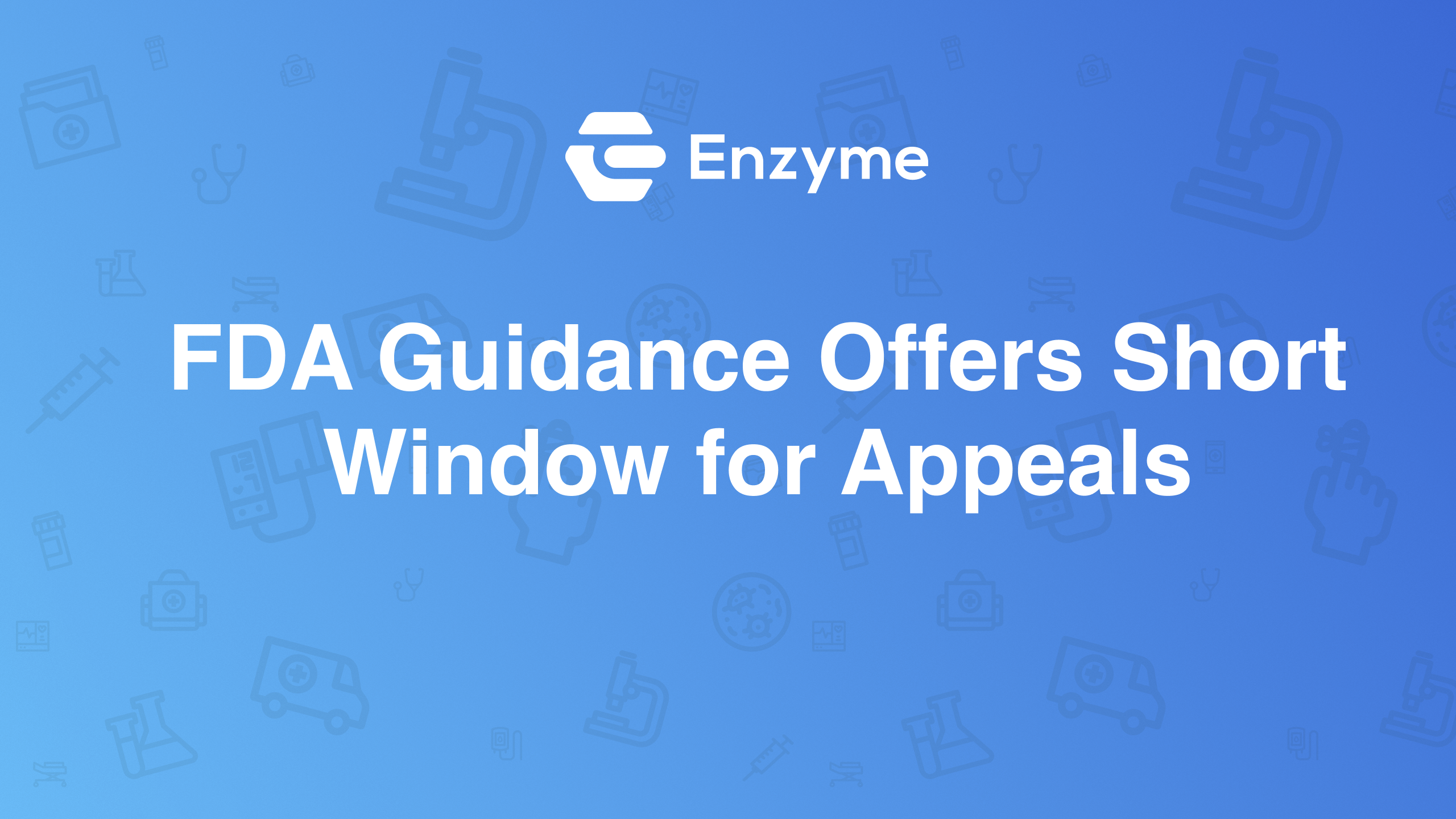 The FDA’s Center for Devices and Radiological Health (CDRH) recently released guidance for appeals related to the agency’s review of device applications, a guidance that collapses several existing guidances into one document. One of the key features is that applicants have only 30 days to appeal a negative decision for a premarket application, a point that applicants must keep in mind when negotiating with the agency regarding an unsuccessful application.

While there are several mechanisms included in the appeals process for adverse regulatory decisions, the 30-day deadline for filing an appeal may be the most critical feature of this policy. FDA reviewers and applicants often interact after an adverse regulatory determination in the hope of resolving the associated issues, but applicants must bear in mind that these interactions might run longer than 30 days.

One possible consequence is that this interaction would consume the entire 30-day period and could lead to a loss of opportunity to file an appeal. This issue was raised in comments regarding the draft version of the 2013 edition of the appeals process guidance. This latest appeals process can be applied to several types of outcomes, including:

These are all in the category of significant regulatory decisions, but outside parties can also appeal an affirmative outcome in each instance. A request for an appeal of one of these decisions is typically filed with the level immediately above the FDA organizational level that rendered the decision. The guidance gives the example of an NSE determination rendered by a reviewer and signed by the director of the related Division of Health Technology (DHT). Hierarchically, the appeal would necessarily be filed with the Office of Health Technology (OHT) of which that DHT is a part.

Appeals that move farther up the organizational chart would next go to the Office of Product Evaluation and Quality (OPEC), then the office of the center director, and finally to the FDA commissioner’s office. The guidance states that this process should be fulfilled in a stepwise fashion before an appeal arrives at the commissioner’s office, although exceptions are available.

The guidance states that the review authority, which is the FDA employee responsible for reviewing the dispute, can designate that authority to another member of the FDA staff. This would presumably eliminate any chance of bias by a review authority who had taken part in the review of the application.

The telescoped review may be employed when the application poses a fundamental regulatory question, is suggestive of a novel policy consideration, or deals with a highly complex scientific question. This type of review can bring the center director immediately into an appeal, but this would take place only under unusual circumstances, such as when there is a perceived imminent risk to public health. Any entities outside the FDA would have to justify a request for a telescoped review, and the agency is at its own discretion to decline such a request.

Applicants can file an appeal with information not included in the application, and an appeal can be processed in parallel with the filing of a new application for that device. The guidance seems to suggest the agency is disinclined to allow this parallel review mechanism due to concerns regarding duplication of effort, however.

The guidance offers a process to address perceived bias against the applicant, although the appeal process is not intended to address such considerations. Any concerns about bias on the part of FDA staff would be handled by the ombudsman’s office at CDRH.

The appellant has the option of filing an appeal as a paper review rather than a more typical interactive appeals process, the latter of which would entail direct interaction with the review authority and the FDA’s review team. The outcome of this process can be to uphold the regulatory decision, to reverse the decision, or to refer the matter back to the reviewer with specific instructions on how to reconsider the application.

Interestingly, there is no template or official standard format for filing an appeal, although the FDA indicated that most such appeals are documented in an executive summary of four to six pages along with supporting information. Both the submitter and the review authority can request input from external experts such as an advisory panel, but this advisory panel process is distinct from the use of the medical device dispute resolution panel. The need for external expertise can be fulfilled by a relatively informal consultation with an external subject matter expert, a role that can be fulfilled by the type of special government employee that would appear at an FDA advisory hearing.

The guidance provides details regarding citizen petitions, petitions filed directly with the FDA commissioner’s office, and the formation and composition of dispute resolution panels. The guidance also makes reference to judicial remedies, which the FDA suggests should be the last recourse after all administrative remedies have been exhausted. Over the past few years, judicial remedies have typically revolved around questions of product classification and the associated consideration of product jurisdiction, such as litigation by Genus Medical Technologies, Inc., which we explained in a February 2022 blog.

The take-away message for our clients is that developers and manufacturers must remain aware of their options regarding any disputes with the FDA’s device reviewers. While these appeal mechanisms can consume a substantial amount of time and other resources, the net effect may be a shorter time to market and to a sustainable revenue generation mechanism that is critical to ensuring the development program doesn’t become a financial burden on the sponsor. The time permitted to file such an appeal is very limited, however, a fact of which some in industry might not be aware.