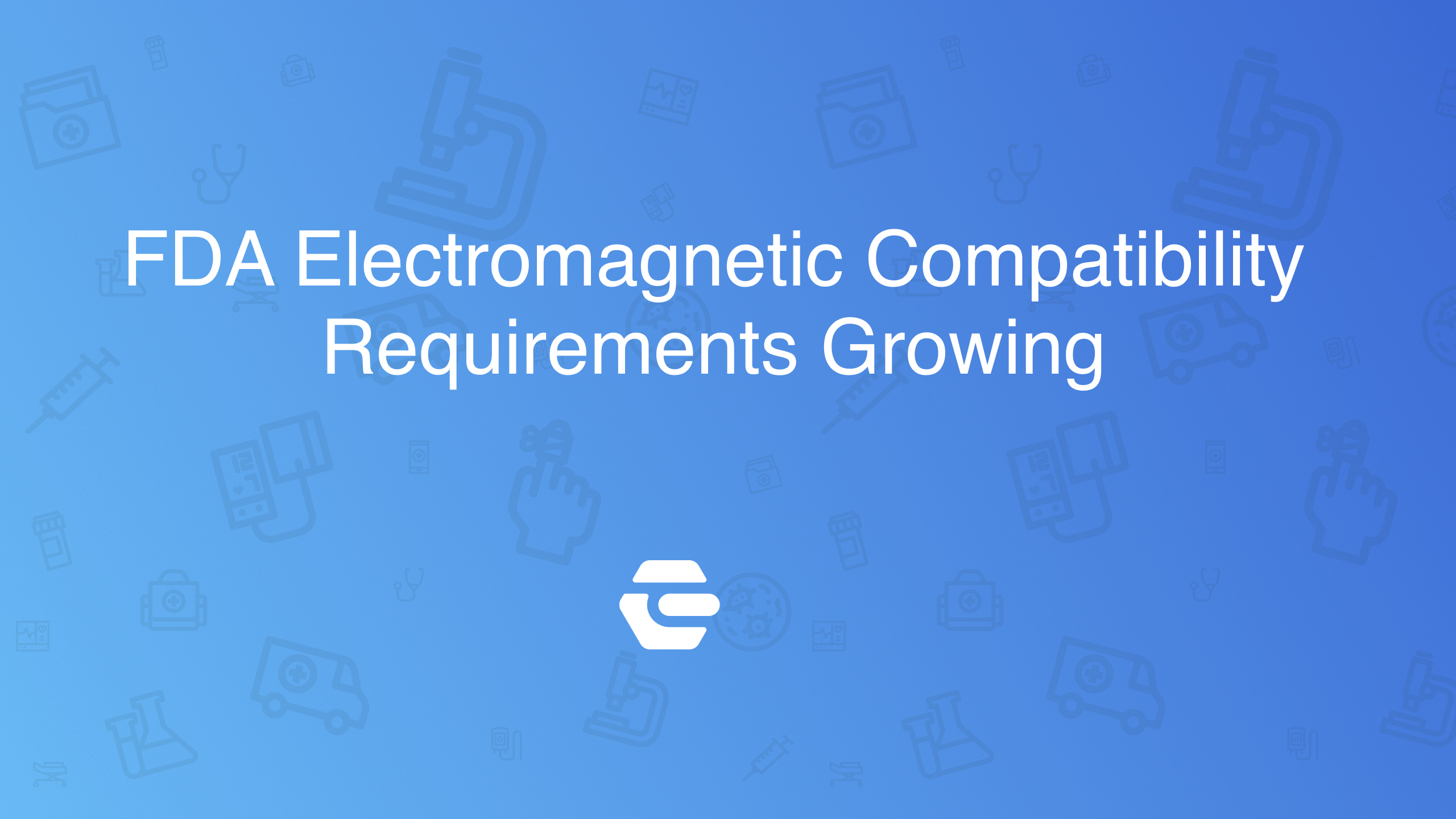 The FDA’s approach to demonstration of electromagnetic compatibility (EMC) has been both broad and reliant on international standards, but a new draft guidance lends more specificity to the question. Should this new draft guidance be finalized in its current form, industry may find the associated quality system demands to be substantially more onerous.

A July 2016 final guidance lists the information a sponsor must provide to demonstrate EMC in electrically powered devices, and it is applicable to submissions for investigational device exemptions, along with the three major premarket review mechanisms for class II and III devices. While the 2016 guidance is short on detail and says little about standards, much of the content of a new Nov. 17, 2020 draft guidance revolves around the use of the 60601/80601 series of standards by the International Electrotechnical Commission (IEC). The draft also makes reference to two standards by the International Standards Organization (ISO), ISO 14708 and 14117, which are both specific to active implanted medical devices (it might be noted that 14117 was updated in 2019, while 14708 has not been updated since 2014).

The 2016 final guidance also lists 10 items that should be included in all the related premarket filings, specifically PMAs, 510(k)s and de novo petitions. The list includes:

While the November 2020 draft guidance consumes more than triple the number of pages needed for the previous final guidance, the FDA said in its regulatory announcement that the draft does not constitute a substantive change in policy. The intent is rather to provide technical information for specific considerations, but the FDA does not explain what prompted the change.

The scope of the November 2020 draft is broader than the existing policy but is limited to devices and device accessories that are electrically powered, or which make use of electrical or electronic circuitry to enable specific functions or to activate sensors. The draft also defines EMC in part as providing immunity to electromagnetic disturbances, language that appears in the previous final guidance as well.

However, the latest draft offers more detail about the meaning of immunity, such as that it infers protection against “unacceptable degradation” of a function that might arise from exposure to other sources of electromagnetic fields, such as power surges and electrostatic discharge. The draft points to a number of recognized standards that can be used to demonstrate EMC, such as IEC 61010-1 for laboratory settings. This standard is included in the FDA’s Accreditation Scheme for Conformity Assessment (ASCA) program that we discussed previously, and is one of three standards the FDA said encompass nearly 100 subsidiary standards that are specific to device types, including laboratory centrifuges.

Immunity pass/fail criteria should be quantitative in nature, according to the November 2020 draft, and it should be specific to the device and function. However, the agency notes that such criteria may have to be developed for each component in a device configured with multiple components/subsystems, a requirement that was absent from the 2016 final guidance. Pass/fail criteria can vary for transient versus continuous EM exposure, and the criteria for ventilators used for adults may differ than for ventilators used for pediatric patients. These are just two requirements that may force developers to include substantially more documentation in premarket filings, should the draft as written be translated into a final guidance document.

The November 2020 draft further recommends that sponsors provide mitigations for any potential sources of EM interference that are not found in FDA-recognized consensus standards, such as would be applicable to electrocautery devices. Product labels are likely to become more detailed as well, given that the agency may require that the label describe the types of devices and equipment with which the device is electromagnetically compatible. Furthermore, labeling would have to advise the operator as to the impact of lost or degraded device function, should the device be exposed to a field with which it is incompatible.

Definition of ‘Special Environment’ Cited for Lack of Clarity

Several commenters expressed reservations about the draft’s use of terminology, one instance of which was the Medical Imaging & Technology Alliance’s question of what constitutes a “special environment” for which the developer would have to test the device. The draft lists an “aircraft environment” as one example, but MITA executive director Patrick Hope asked whether the term might be intended to suggest a worst-case environment rather than a typical environment. Hope observed that if the device is intended for use in a special environment, the manufacturer will have to identify the associated risks in its risk management activities.

Hope stated that the section discussing consensus standards for non-implantable medical devices is the only section that mentions in vitro diagnostics (IVDs), an observation also made by the Advanced Medical Technology Association (AdvaMed). Hope asked whether this suggests that IVDs are subject to other portions of the draft, while AdvaMed stated that IVD manufacturers might interpret the draft as suggesting that their tests are subject to IEC 60601-2, which AdvaMed’s Ruey Dempsey said specifically excludes laboratory-based IVD equipment.

Dempsey said IVD manufacturers have traditionally used IEC 61326:2-6 for these purposes, and that the FDA recently de-listed this 61326 variant from its roster of recognized standards. She also advised that other regulators do not require a demonstrated compliance with 60601-1-2 for IVDs, and thus a retention of this mandate for the final guidance would require test developers to demonstrate compliance with 61326 for non-FDA agencies, and a hybrid 61326/60601 report for the FDA, which adds to regulatory burden and costs.

Dempsey recommended the FDA provide more detail about which device types are included in the other provisions of the draft. All in all, the FDA appears to have a substantial amount of work in front of it before it can complete the draft, including a number of instances in which industry would like to see more clarity.