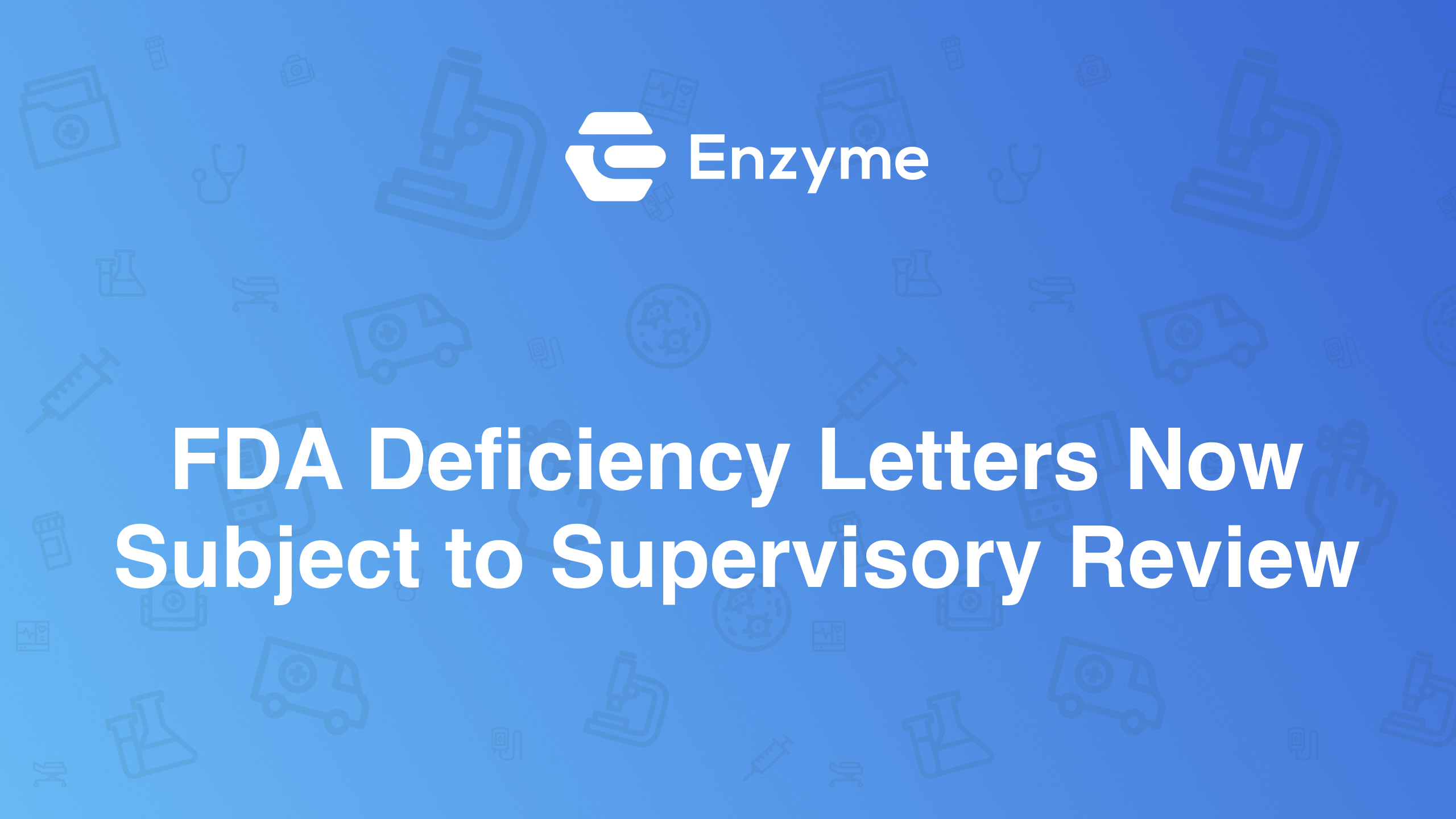 The FDA and industry have a long-standing disagreement as to whether the agency asks for more information than needed to process premarket applications, a question that has been addressed in the fifth Medical Device User Fee Agreement (MDUFA V). The agreement requires the FDA to update its guidance for responses to deficiencies in these applications, but the most significant change might be that these deficiency letters must now undergo FDA supervisory review.

We recently examined the primary features of MDUFA V, which requires that applicants pay a significantly larger amount for user fees across all application types for both large companies and companies with less than $100 million in revenues. While premarket review times are not expected to drop significantly over the next five years despite the increase in user fees, there are some process enhancements that we believe industry will find helpful, such as this new approach to requests for additional information.

Supervisory review of these communications of deficiencies will focus on four areas, which are listed in the guidance as key content and format characteristics of these FDA letters. These consist of:

The statement of the basis for the deficiency should describe both the specific scientific issue and the information the FDA relies on to support its position about the deficiency. This supervisory review process will be used to ensure that specific references are itemized in the deficiency letter, but also that any omission of such references is justifiable. The most significant deficiencies will be listed first in the deficiency letter, but FDA managers will also be required to consider the totality of the cited deficiencies as part of a process to establish whether each individual request is still appropriate.

It is difficult to predict how the implementation of this guidance will work in practice, but the language seems directed toward an elimination of deficiencies that are secondary at best, and an undue focus on minutiae on the part of the FDA review team at worst. We at Enzyme would point out that each of the product offices at the Center for Devices and Radiological Health has its own more or less unique approach to premarket review, and consequently the implementation of this guidance might seem to vary somewhat between these offices.

The FDA stated that the scope of the guidance is limited to marketing applications, specifically 510(k)s, PMAs and de novo petitions, but applications for humanitarian device exemptions (HDEs) are also within scope, while investigational device exemptions seem to be excluded. These deficiency letters are delivered via e-mail, part of a standing emphasis at CDRH to reduce the use of paper submissions and communications. The guidance offers some clarity regarding terminology as well. For PMAs and HDEs, these communications are described as major deficiency letters, while they are characterized as additional information letters or requests for additional information when issued for 510(k)s and de novo applications.

Implementation of Guidance to be Staged

Manufacturers and developers should not expect the FDA to exhaustively implement this guidance immediately, as the MDUFA V agreement letter sets forth a few benchmarks. The commitment letter states that the FDA will provide a statement of the basis for the deficiency in 75% of the deficiencies in fiscal year 2023, a rate that goes up five percentage points in each of the four following years of MDUFA V. However, this apparently does not apply to HDEs as the guidance states that this improved response rate will be required only for PMAs, PMA panel-track supplements, 510(k)s and de novo requests. The user fee agreement calls for an annual review of the FDA’s performance, the results of which will be reviewed with industry.

The guidance recommends a specific format for responses to a deficiency letter, beginning with a restatement of the issue(s) cited by the FDA. The response should provide the information requested or explain why the absence of that information should not affect the application. A third option is to provide alternative information and an explanation as to how that information addresses the FDA’s concerns.

As is ordinarily the case, this guidance interacts with a number of other FDA guidances, so companies may have to review these guidances while considering a response to a deficiency letter. Perhaps the most important of these is the least burdensome guidance from February 2019, but also relevant are the updated guidances on the effects of deficiency reviews on review times for 510(k) filings, for PMA filings, and for requests for risk classification via the de novo process. While this updated guidance will reduce the administrative burden for many premarket applications, the work required to respond to these FDA letters is likely to change very little in most instances.