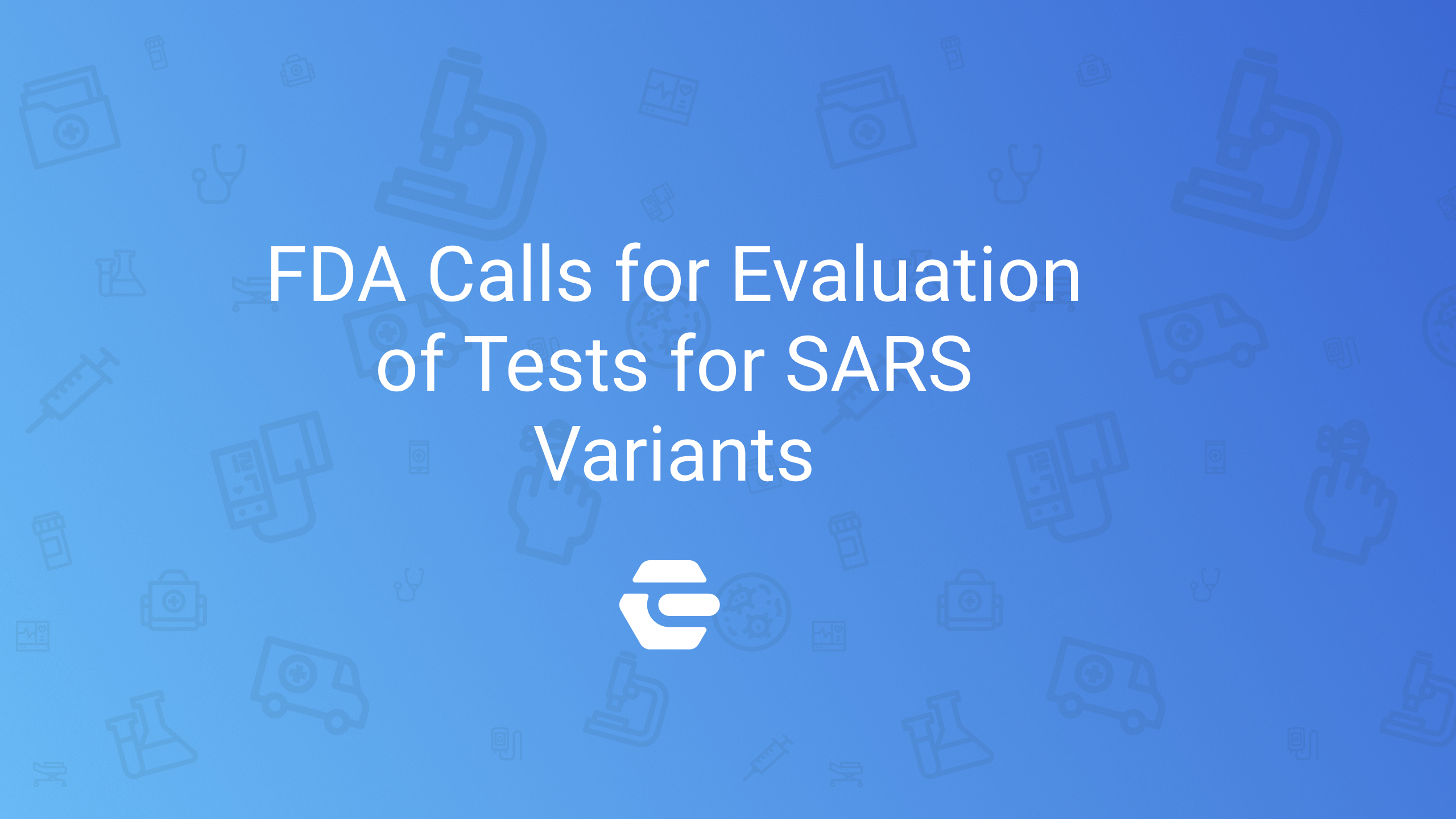 FDA Calls for Evaluation of Tests for SARS Variants

The emergence of new variants of the SARS-CoV-2 virus triggered a number of public health concerns, and the FDA responded with guidance for developers of vaccines, therapies and diagnostics. The guidance for diagnostics makes clear that test developers will have to not only rethink their approaches to as-yet unauthorized tests, but also revisit authorized tests to account for the impact of these new variants on test performance.

The FDA’s Feb. 22 guidance noted that the variants can be created by amino acid substitutions and insertions/deletions to the pathogen’s genome. The three variants referenced are the B.1.1.7 variant first identified in the U.K., the B.1.351 variant that first emerged in South Africa, and the P.1 variant of Brazilian origin. The agency posted the guidance as an immediately-in-effect policy, but said the related docket (FDA-2020-D-0987) remains open for comment. As of the date of the guidance, the agency’s surveillance suggested that the mutations have affected existing molecular tests “at a very low frequency.”

The February guidance adopts a decidedly more cautious approach than the agency seemed to express in the Jan. 8 advisory, stating that molecular tests designed to pick up specific known variants “are likely to become obsolete quickly,” at least where whole genome sequencing claims are concerned. The guidance offers several recommendations regarding design considerations, such as:

The inclusion of the pan-SARS target must be done in a way that strikes a balance between providing test resilience in the face of any new variants and efficient use of developer and lab resources. Test developers may have to include instructions regarding interpretation of test results when such a test is positive for the pan-SARS target, but negative for the known SARS-CoV-2 variants. The agency may want to see instructions for patient follow-up in this scenario as well.

The guidance recommends that developers “periodically” check the alignment of a molecular test’s primer/probe sequences with the genomes found in publicly available databases. Such a database, one of which is the Global Initiative on Sharing Avian Influenza Data (GISAID) database, can aid the developer in establishing whether a mutation has occurred in the region targeted by a test’s primer or probe.

Developers may have to consider not just the location of any sequence mismatch stemming from the mutation, but also whether multiple mismatches might affect test performance. In this instance, the focus is largely on whether a mutation or set of mutations might reduce test performance by 5% or more from the performance documented in the EUA, or reduce performance below the level set out in the governing emergency use authorization (EUA) template.

The guidance proposes a three-stage approach to investigating the impact of a mutation on test reagent hybridization when the mutation has created one or more mismatches between a primer/probe and the target binding site. This includes performance of an in-silico calculation of the effect of the mutation, wet testing of the genomic material, and wet testing of a viral isolate within the mutation(s). Each of these steps is presumed to offer a more accurate evaluation of the effects of a mutation than the previous step. Concomitantly, developers will be required to:

The sponsor is also liable for justifying any actions they may or may not take following these evaluations. Should the Tm evaluation indicate a potential problem – such as a drop in temperature below the temperature needed to achieve annealing – the sponsor would proceed to wet testing with a clinical sample. If such a sample is unavailable, the developer can default to the use of synthetic RNA targets, again both with and without the mutation.

The section dealing with serology and antigen tests is not as detailed as the section for molecular tests despite the guidance’s disclaimer that accounting for the impact of the new variants on these tests “is not as straightforward as for molecular tests.” One step the agency is considering is requiring developers of these tests to obtain samples of the novel variants to aid in evaluation of the impact of the new variants on analytical performance.

Other options under consideration are the use of in silico and/or in vitro modeling to characterize the impact of mutations on the proteins responsible for prompting antibody response. The agency urged developers to stay in touch with FDA staff for recommendations on how to deal with the impact of the new variants on both existing and prospective EUAs. Among the measures developers may have to undertake in this context are:

The FDA said it would update its testing templates as more reliable data become available.

Despite the confusion and hardship introduced by these new variants, there is research indicating that T-cell immunity may be more robust across variants than might have been anticipated. Researchers at the La Jolla Institute for Immunology in La Jolla, Calif., indicated that CD4+ and CD8+ T cell responses seem largely unaffected by these mutations, apparently due to the absence of any effect of the mutations on the virus’s T cell epitopes.

Indeed, the FDA granted an EUA to Adaptive Biotechnologies Corp., of Seattle March 5 for a test for T cell immunity using next generation sequencing. This test is indicated for those whose symptoms emerged at least 15 days prior to performance of the test, although this is at present a lab-based test only and not available for point-of-care use.