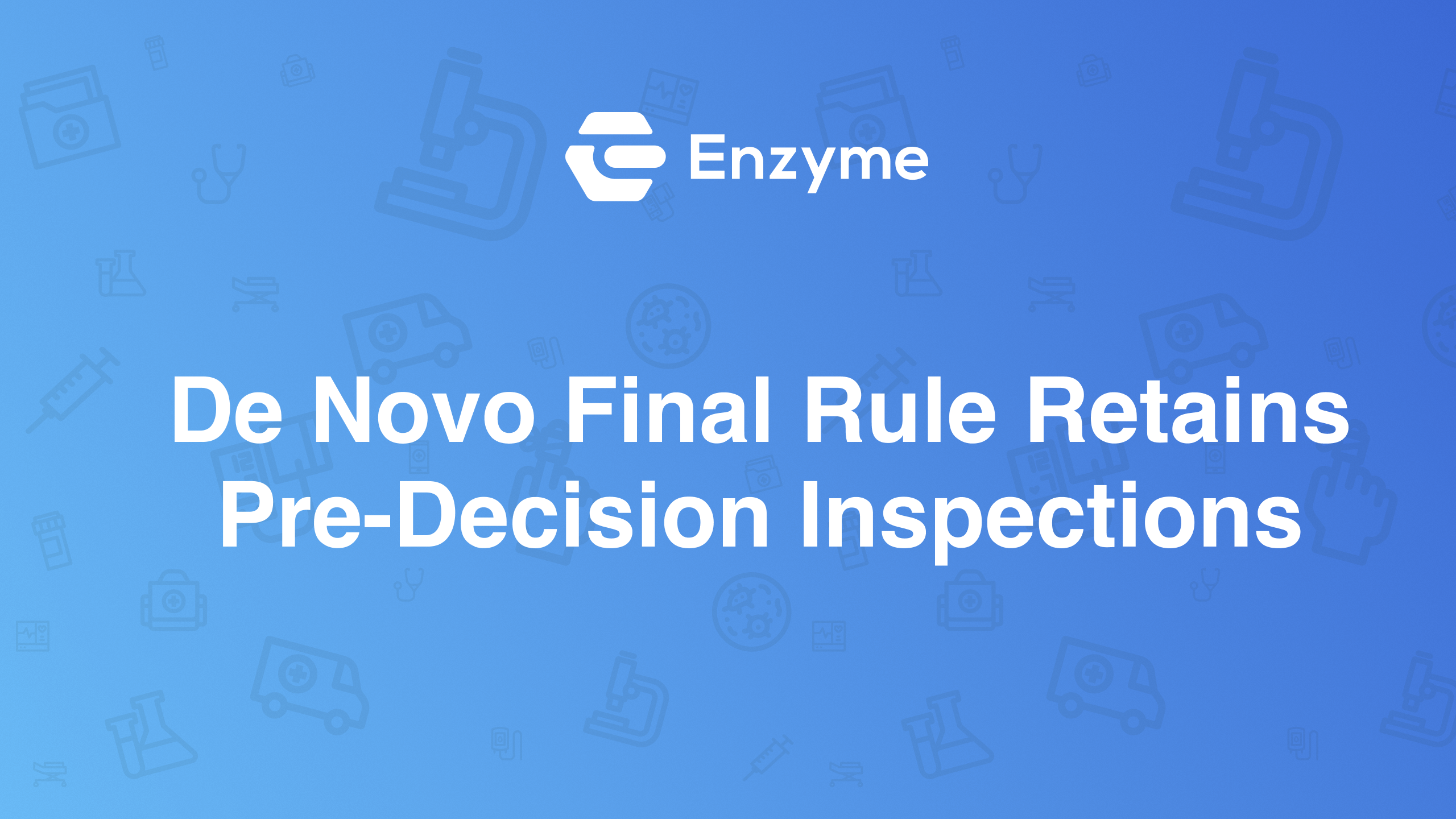 The FDA final rule for de novo applications carried over several contentious features from the draft, including a provision giving the FDA the authority to conduct inspections while the application is in process. Consequently, manufacturers and software developers will have to ensure that their compliance systems are fully in order before finalizing and filing their applications rather than wait to establish whether the FDA will approve the application.

The FDA has broad authority to conduct pre-approval inspections for class III, PMA devices, but that authority for class II devices is statutorily limited. Under Section 513 of the Food, Drug and Cosmetic Act, inspectional authority for class II devices is limited to circumstances in which the agency has reason to believe a failure to comply with the Quality System Regulation (QSR) could pose a serious risk to human health. The final rule is effective Jan. 3, 2022, and manufacturers and developers with pending or in-process de novo applications should thus waste no time in ensuring that their compliance systems are ready for an inspection.

The agency stated that these inspections are justified due to the potential for clinical and non-clinical data to fail to accurately represent the risks and benefits associated with the product’s use. The FDA said it has previously conducted inspections when its review of a de novo petition provoked concerns about the integrity and quality of the data collected during pre-clinical and clinical development.

In some instances, FDA reviewers are said to have determined that the data do not represent a plausible series of benefits and risks, but the final rule also cites a need to establish whether the manufacturing site has instituted a quality system that complies with Part 820. The rule offers two examples of the agency’s concerns, including a need to ensure that a combination product’s mechanisms of elution will perform reliably. The other example provided by the FDA is an instance in which the manufacturer employs a method of sterilization that is not well characterized by experience or by alignment with recognized standards.

The list of information required in a de novo application is extensive, such as a discussion of all software information and testing for devices that incorporate software. This includes device hazard analyses, software system information, and a description of the hardware that will be used with the software. The sponsor must also provide:

As described in the preamble, one of the comments filed in response to the draft was a suggestion that the de novo process include an abbreviated alternate pathway when the requester believes their product is a class I device. The FDA declined to go along with this proposal because of administrative concerns, particularly with regard to turn-around times, but the agency also saw no merit to a suggestion that a granted de novo petition be made unavailable as a predicate for an unspecified number of years. The petitioner had argued that such a safe harbor would facilitate the collection of patient safety data and reward innovation, arguments the agency found lacking.

One of the features of this new policy for de novo filings is a requirement that the sponsor include a bibliography of all published reports related to the safety and/or effectiveness of the device type. The scope of this requirement was limited in the draft to that which is in possession of the applicant or would be “reasonably obtainable,” although the meaning of that term is open to interpretation.

The final policy holds this feature with the justification that such information – even if not available in complete form to the applicant – would be helpful in reviewing the application, particularly if the FDA is able to avail itself of the entirety of the data. The implications of this policy include that sponsors should conduct an exhaustive search of the literature and report any reasonably related findings, even when the implications of those findings are unclear. This would seem to apply to information derived from the literature and studies registered at clinicaltrials.gov. We would note that the agency did not explicitly restrict the geographic scope of this requirement.

Another source of data that will be required with a de novo submission is a description of alternative practices for treatment of the condition in the device’s intended use statement. This would include biologics, drugs, and current standards of care as well as existing device approvals and clearances. This requirement is typically not associated with 510(k) devices, and the FDA declined to go along with a recommendation that the requirement to describe alternative treatments be limited to the current standard of care.

One of the more contentious provisions in the draft is that the applicant must provide copies of any advertising material to be used with the product. The FDA stated that several commenters had argued that this provision historically falls outside the scope of premarket review mandates for class I and II devices. The final rule states that this requirement:

We would point out that the FDA recently completed its latest overhaul of the intended use rule, the scope of which includes class I devices. As we blogged previously, the intended use final rule gives the agency the latitude to consider all relevant sources of information to determine a device’s intended use, including the name of the device. However, the “all relevant sources” standard would seem to include information generated by the sponsor during the product’s developmental phase as well.

Given that advertising and promotional information is now required with an application for grant of de novo petition, developers and manufacturers must be particularly vigilant regarding potential product claims. In this new regulatory world for de novo devices, any rush to complete the application could lead to a rejected application due to seemingly conflicted statements of intended use, just one of several new hazards for de novo devices in 2022 and beyond.