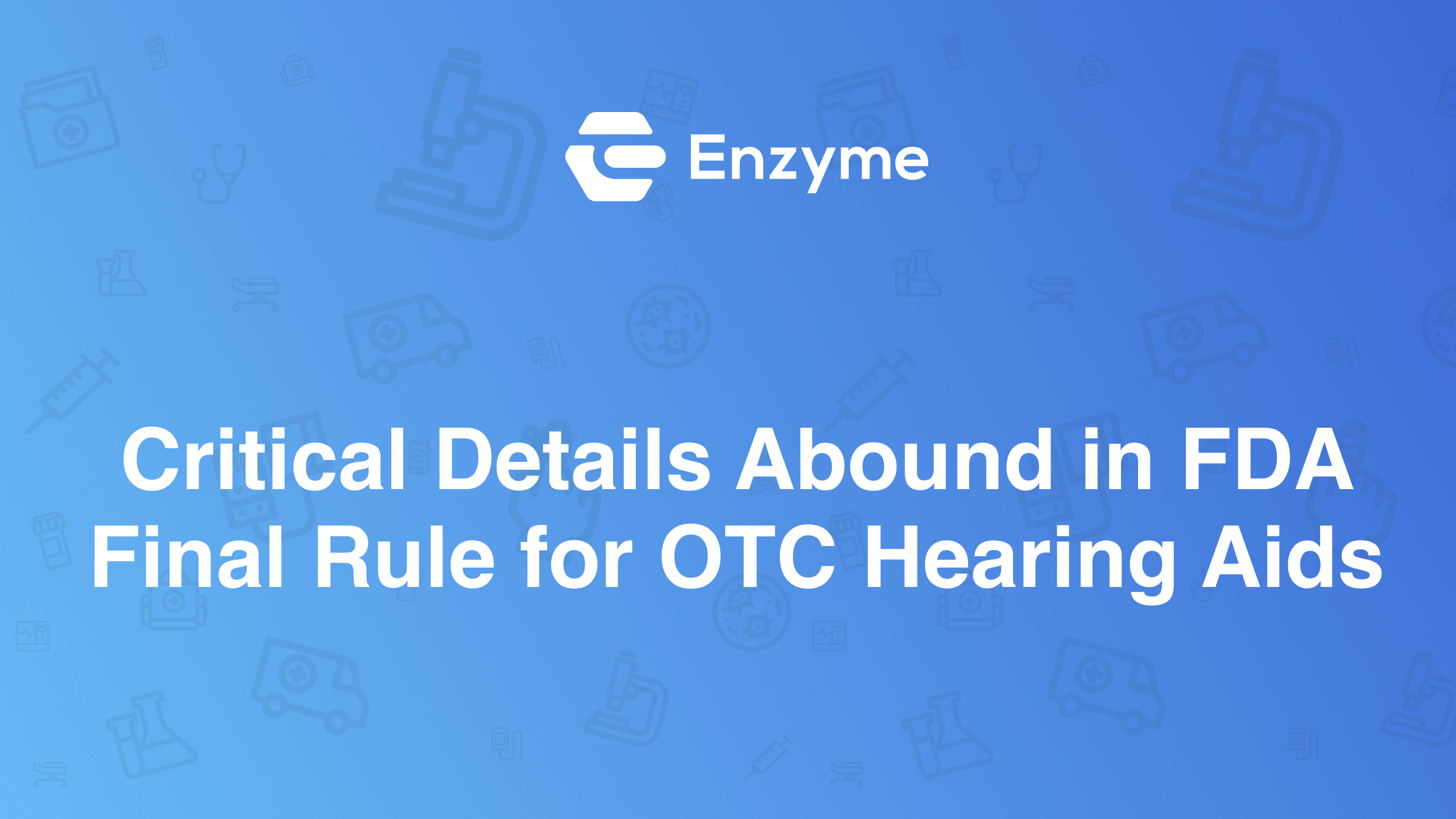 Enzyme Team
-
September 6, 2022
The Folks Behind the Brand

The digital hearing aid may already have established market dominance over analog devices, but the FDA’s final rule on over-the-counter (OTC) hearing aids might further amplify that market dominance. Any companies that are new to this space should be mindful of the relatively narrow difference between an OTC hearing aid and a personal sound amplification device (PSAP), but also of the requirements for OTC hearing aids that have been added to the regulation.

The final rule is effective Oct. 17, 2022, for new devices, but products that are already on the market have 240 days (April 14, 2023) to bring their devices into compliance. This rule was seen as of sufficient importance that both FDA commissioner Robert Califf and HHS Secretary Xavier Becerra took part in the Aug. 16 media briefing, as did Brian Deese, director of the White House National Economic Council. While it may be tempting to assume that an OTC device is not subject to the regulations required for most prescription devices, the FDA advised that compliance with Part 820 is expected. As we previously explained, there is also the potential for an overhaul of Part 820 to bear in mind, and so developers of OTC hearing aids that are new to the world of medical device regulation cannot take much for granted when it comes to compliance.

No Prescription or Hearing Evaluation Required

There are a number of specific considerations to be accounted for in this final rule, but we would point out several additional general features of interest, such as that the OTC hearing aid is available only to those with mild to moderate hearing loss. Because these are OTC devices, there is no need for a consultation with a medical professional, but neither is the FDA requiring that a purchaser verify that they have reached their majority. In addition, the final rule does not require that OTC hearing aids be self-fitting devices, although the agency recommends that purchasers seek professional services for device fitting.

There are several key elements to the rule that will affect the production, manufacture, labeling and marketing of OTC hearing aids. These include:

The final rule’s description of the difference between a self-fitting OTC device and a customized device is extensive, but there are several key distinctions. Broadly speaking, a self-fitting device is one that allows the purchaser to interact with the device or an accessory to derive and customize the settings. This assumes the purchaser has gone to the trouble to obtain an audiogram to guide the process.

The agency said customization is a more general concept than self-fitting, but includes the ability to make frequency-dependent changes to the device’s output based on user preference. This in turn is premised on the presumption that a single profile for gain versus frequency will not typically suffice to accommodate the majority of needs for those suffering from mild to moderate impairment. For instance, a device that provides a flat gain profile across all frequencies might be unsuitable for those with sloping hearing loss as is commonly seen in age-related hearing loss. However, a flat gain profile might be appropriate for those suffering from other types of hearing loss.

As is the case with the draft rule, the final rule offers no gain limit on amplification, but the general limit on output is 111 decibels of sound pressure level (dB SPL), with 117 dB SPL allowable for devices while input-controlled compression is activated. This was reduced from the limits described in the draft, which were 115 dB SPL and 120 dB SPL with input-controlled compression.

In determining a safe level of output, the FDA made use of NIOSH-98, an occupational noise exposure guideline developed by the National Institute for Occupational Safety and Health (NIOSH). This guideline is based on a maximum, non-hazardous exposure of 85 A-weighted decibels (dBA) over a span of eight hours, but the FDA stated that an increase of 3 dB reduces the safe duration of exposure by half. The FDA’s employ of this NIOSH standard was driven by a need to capture the notion of cumulative exposure, and the reduction in maximum output seen in the final relative to the draft rule is a reflection of that interest in striking a balance between device usability and the risks of cumulative exposure.

PSAPs are subject to the FDA’s electronic radiation control requirements, but the FDA has published an updated guidance that provides the distinction between these devices and OTC hearing aids. The most important part of this guidance revisits the question of intended use and how a demonstration of objective intent influences the agency’s understanding of the manufacturer’s intended use. We would emphasize that the FDA has drawn some fairly bright lines for making the distinction between the two, lines that make it difficult and dangerous for manufacturers to try to skirt FDA oversight by minimizing the description of the device’s intended use. Among the claims that would make a product an OTC hearing aid rather than a PSAP are:

The regulation has been amended to account for the rule, which is listed at Part 874.3325. There are seven special controls, including a requirement for clinical data to evaluate the self-fitting strategy for the device. The developer must demonstrate electromagnetic compatibility, the subject of a recent FDA final guidance, and must undertake software, validation, verification and hazard analysis. Usability testing is also required, as is testing for several considerations when the device incorporates wireless technology.

According to the National Institutes of Health, roughly 30 million in the U.S. have some sort of hearing impairment or loss, but the majority of this market apparently remains untapped. This might encourage a rush to market with products that offer poor product quality manufactured at sites that exhibit half-hearted compliance efforts. The subsequent enforcement crackdown would damage the reputation of industry as a whole, and thus there is a need for manufacturers and developers to strike the right balance between the benefit of a massive untapped market and the risk associated with rushing to market with in-exhaustively evaluated products and shoddy compliance programs.