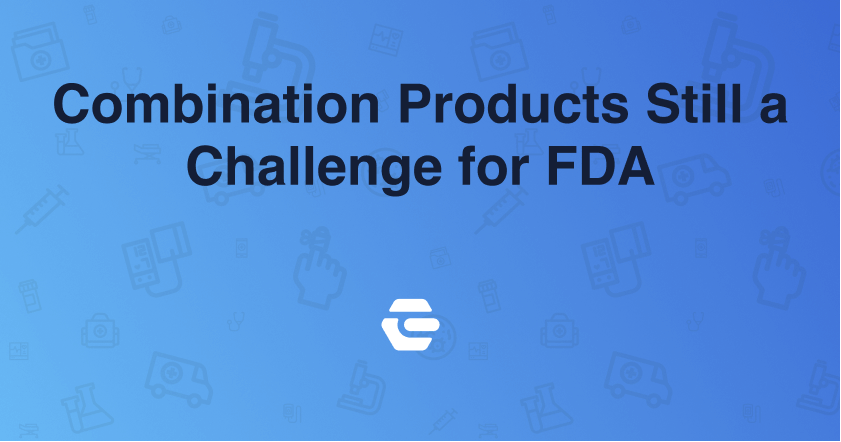 Combination products are perhaps the most complex class of products regulated by competent authorities, but that complexity makes itself felt for the manufacturer as well.

Combination products are perhaps the most complex class of products regulated by competent authorities, but that complexity makes itself felt for the manufacturer as well. The FDA has put forth several guidances recently that deal with some of the more prosaic considerations in connection with these products, but they withdrew a proposal that was opposed by some, but not all stakeholders.

In September 2017, the FDA floated a novel regulatory approach to a device-led combination product for which the maker of the drug is not interested in collaboration. Typically, drug-device combo products require the cooperation of the drug manufacturer, but the devices-referencing-drugs (DRD) concept is a different proposition. In this scenario, the drug manufacturer is not willing to cooperate with the manufacturer of a device, which is seeking marketing authorization for the use of that device with a different drug than with which it was initially approved.

The FDA said the DRD question arose in a public meeting in 2005, so the question has some history behind it. The 2017 FDA notice advised that any such proposed combinations would most likely have to go through the PMA mechanism, and the FDA conducted a November 2017 hearing on the question. The docket for this proposal provoked a number of responses, which were anything but unified in their views of the question.

One trade association, the Advanced Medical Technology Association (AdvaMed), voiced its support of the proposal, stating that insulin pumps are an example of the DRD principle successfully at work. AdvaMed acknowledged that the device manufacturer may find it difficult to meet the FDA’s demands for data absent proprietary information provided by the drug manufacturer, but said other regulatory issues should not prove insuperable.

The Combination Products Coalition (CPC) was supportive of the concept, but highlighted several potential issues. The CPC said that among these are:

The Pharmaceutical Research and Manufacturers of America (PhRMA) expressed its “deep-rooted concerns,” including that the FDA may not have the statutory authority to operate such a regulatory mechanism. PhRMA also raised the question of how the two parties to this type of combination would deal with the responsibility for adverse event reporting.

Ultimately, the FDA signaled early in May 2020 that it was unable to move forward with the proposal at this time because of the difficulty of overcoming the scientific, legal and regulatory issues implicated by the proposal.

Another combination product guidance, although one still in draft form, is the October 2019 FDA draft for type V drug master files (DMFs), a voluntary submission for drug-led combination products that incorporate electronics or software. Given the considerable interest on the part of drug manufacturers in digital medicine as a medication management tool, this would seem to be an important guidance. Indeed, PhRMA acknowledged that the document provides much-needed insight into how to update the agency when a single electronic platform might be used in conjunction with multiple drugs.

One of the issues cited by PhRMA is that there is little clarity as to what sort of changes to the device component might require a submission, voluntary or otherwise. The group further requested that the scope of the draft, which does not include biologic-led combination products, be expanded to include products such as pre-filled syringes.

The Combination Products Coalition (CPC) also recommended the agency clarify how software updates might be handled, and backed the notion that the terms of the draft should not be limited to electronic- or software-based device platforms. The comment period for this draft ended Dec. 30, 2019, and is one of a number of FDA draft guidances that is stuck in queue behind the COVID-19 pandemic.

The FDA had released two more draft guidances for combination products by the end of 2019, including the draft guidance for combination product bridging. In regulatory terms, bridging is the practice of applying information from an earlier phase of a development project – or information from a separate development project – to an application for a drug- or biologic-led combination product. The comment period for this draft closed Feb. 18, and CPC stated that there are several key improvements that are needed for this draft, a list that includes:

The CPC further recommended that the final version of the guidance make reference to standards such as ISO 20069:2019 to facilitate identification of information gaps in a sponsor’s submission, and that the FDA convene a one-day workshop to flesh out some of the issues attendant to combination product bridging.

The December 2019 draft guidance for sponsors seeking feedback from the agency on combination products might seem the least controversial of all the recent FDA actions in this category, but the draft provoked 13 total responses. The draft adds the acronym CPAM, for combination product agreement meetings, to the regulatory alphabet soup, and generally outlines best practices for interactions between the sponsor and the FDA.

Unfortunately for the FDA, the draft briefly resurrected the primary mode of action (PMOA) issue, although in a much more benign manner than in the past. AdvaMed argued that the draft is less than clear on the question of co-packaged convenience kits. One possible tripwire in this context is that sponsors may be unsure as to whether an additional premarket review is required when a constituent part of a convenience kit is sterilized. This picture might be further complicated by questions of which FDA product center would have jurisdiction over that review.

Another issue the FDA may feel compelled to answer was raised by the American Association of Tissue Banks, which asked why the FDA had proposed to institute a CPAM meeting within 75 days when a 60-day deadline has been applied toward similar meetings. The CPC made several points about the tenor of the draft, which the group said seems to suggest the agency would prefer to discourage the use of CPAM meetings, particularly given that the draft states that the agency expects to conduct only one CPAM meeting per year.