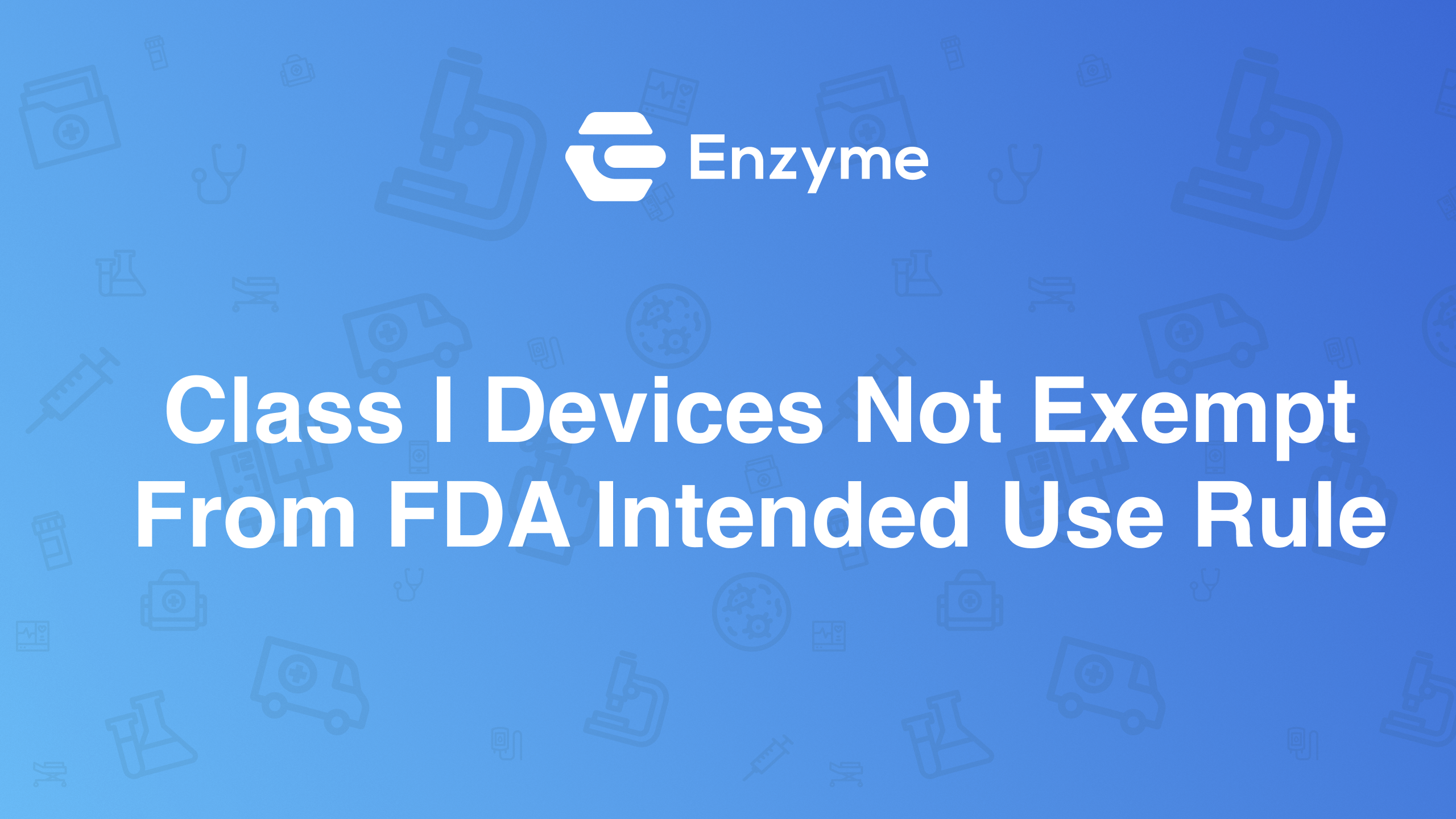 Class I Devices Not Exempt From FDA Intended Use Rule

For the most part, the final version of the FDA intended use rule does not represent a significant departure from the draft rule published in September 2020, an outcome that left many stakeholders dissatisfied. One important point of clarification in the final rule is that it applies to devices that are exempt from premarket notification rules, which means that low-risk class I devices are subject to FDA enforcement regarding intended use.

While there are few changes between the draft and final rules, it is clear that industry has to maintain a cautious stance when communicating with customers and physicians. We blogged about the draft rule last year, which stated that all relevant evidence would be considered in determining the manufacturer’s intended use.

The previous final rule of 2017 was widely criticized for stating that mere knowledge of off-label use could be leveraged as evidence of intended use. That provision was eliminated in the 2020 draft rule, as was the totality-of-evidence approach to determining the manufacturer’s intended use. However, the inclusion of devices that are exempt from premarket notification rules captures class I devices and a number of exempt class II devices. The agency also had to clarify that the rule applies to devices routed through the de novo review process.

The list of devices that are exempt from premarket notification requirements is extensive, and developers of these products may have believed that these products were not within the scope of the rule per the language of the draft. There are dozens of class I in vitro diagnostics and associated devices that are subject to the intended use rule, such as data processing modules for clinical use (Part 862.2100). Medical image communication devices under Part 892.2020 are also subject to the intended use rule.

The preamble makes clear that the scope of the rule captures a number of entities in addition to device manufacturers and developers of regulated software. The list includes:

The FDA had received approximately 15 responses to the draft, which included some objections to the draft’s design-or-composition feature. The agency responded by stating that this provision is not a departure from standing agency policy, and recited case law in affirming that point. The 2008 case of U.S.  v. Caputo, which was heard in the U.S. Court of Appeals for the Seventh Circuit, was cited as an example of FDA policy regarding design features, specifically with regard to the size of the device in question. In Caputo, the question revolved in part around the expanded internal volume of the Plazlyte sterilizer, which the FDA had argued necessitated an additional premarket filing.

Another controversial aspect of the revised design for the Plazlyte was the use of spacers with holes that FDA argued was introduced to allow for elution of a more viscous substance than was described in the 510(k). Abtox Inc. had promoted the revised version of the sterilizer for off-label use based on studies of the device’s expanded capabilities, and the company successfully argued in district court that those communications were truthful and not misleading. That argument failed at the Seventh Appeals Court hearing, however.

Interestingly, the FDA also made note of a 1994 case involving a veterinary drug intended to reduce pet odor when ingested, U.S. v. Undetermined Quantities of Bottles. The active ingredient in question, chlortetracycline, was intended to reduce bacterial levels in animal digestive tracts. The FDA prevailed in the hearing at the U.S. Court of Appeals for the Tenth Circuit despite that the district court had determined that the introduction of the drug did not constitute an intent to treat a disease.

Consequently, companies that manufacture products that do not seem to treat a medical condition cannot count on avoiding liability under the agency’s intended use policy. This might be an especially salient point for developers of class I software used in clinical trials. The software might be initially designed only to record data for tracking purposes, but the regulatory status of that software may change if that information is used to make a diagnosis, or is used as a source of information in making treatment recommendations.

Circumstances of Distribution Can Imply Intended Use

One of the more significant elements of the draft that was sustained in the final rule is that all relevant sources of evidence may be considered in determining intended use. The FDA said this is also nothing more than clarification of standing policy, although the agency responded to questions about this issue in the context of the notorious 2016 case of U.S. v. Vascular Solutions Inc. This case involved allegations of off-label promotion of the company’s Vari-Lase device. The charges against Vascular Solutions were dismissed in 2016, but the point made by FDA is that evidence of intended use includes the circumstances of a device’s distribution, including purposes for which the device is neither labeled nor advertised.

The rule provides examples of device-related claims that would run afoul of the agency’s policy on intended use. These examples are:

The FDA’s position on the ultrasonic massager is predicated on the understanding that this type of energy affects “the underlying tissue through a sonic mechanism” rather than through the application of mechanical pressure. We would point out that this is an example of a seemingly innocuous claim that can nonetheless provoke a potentially damaging regulatory response, just one of a number of hazards for FDA-regulated companies where the intended use rule is concerned.