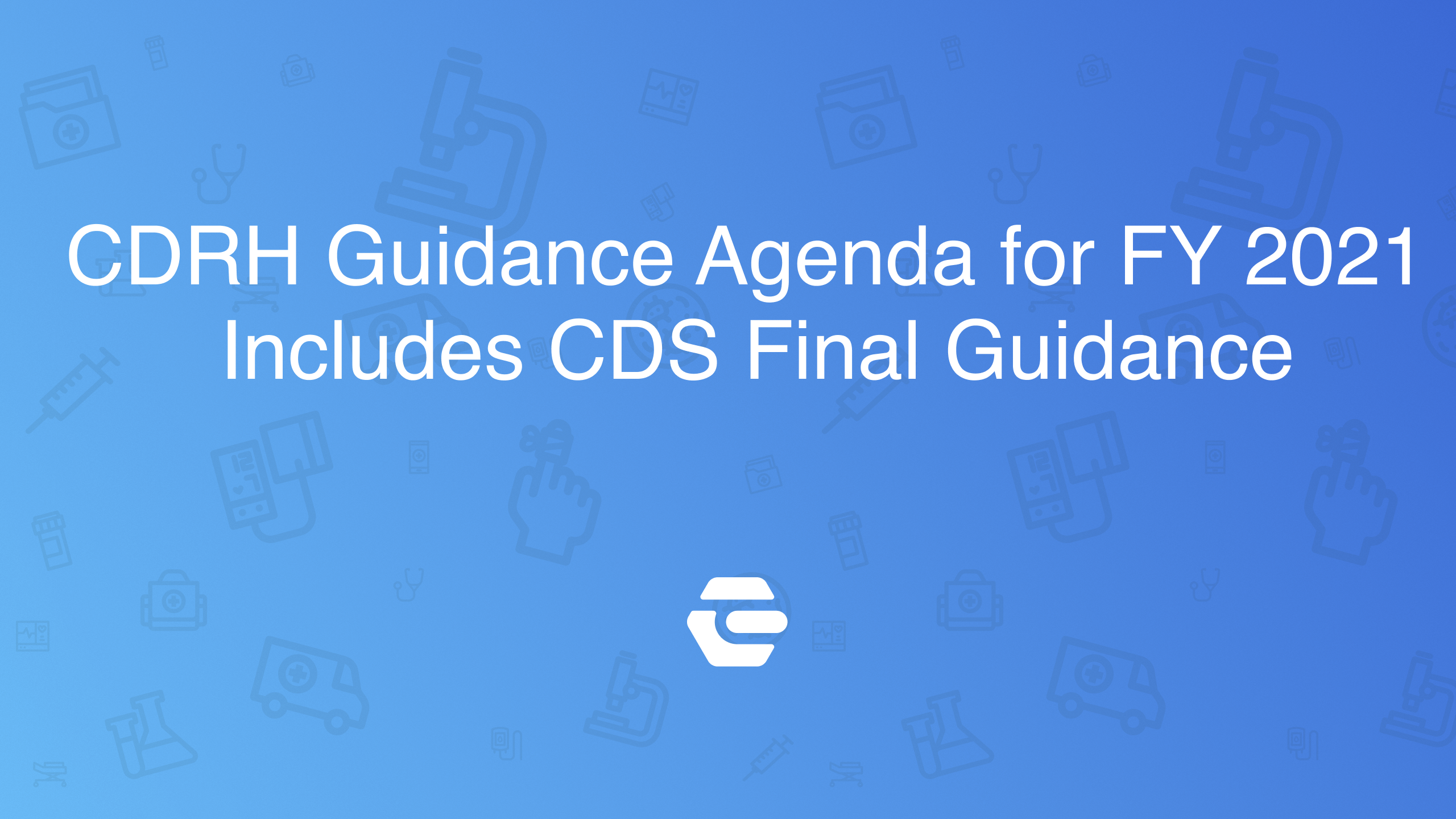 The FDA’s Center for Devices and Radiological Health (CDRH) posted its annual guidance agenda for the new fiscal year. The annual CDRH guidance agenda is broken down by priority (A and B lists), and by draft versus final guidances. One of the higher priority items is a final guidance for clinical decision support (CDS) software, a document that will span the three major life science centers at the agency and thus represents one of the most critical guidances on the list for the digital health sector.

The FDA’s Center for Devices and Radiological Health (CDRH) posted its annual guidance agenda for the new fiscal year, with several lower-priority items that will prove fascinating, such as a draft guidance for implanted brain-computer interfaces. However, one of the higher priority items is a final guidance for clinical decision support (CDS) software, a document that will span the three major life science centers at the agency and thus represents one of the most critical guidances on the list for the digital health sector.

As always, the annual CDRH guidance agenda is broken down by priority (A and B lists), and by draft versus final guidances. The A list for final guidances is populated with only four guidances in addition to the CDS final, such as device-specific guidances for the performance-based pathway for class II devices. The A list for draft guidances includes a draft that will spell out the transition from emergency use authorizations (EUAs) for the COVID-19 pandemic to conventional premarket filings, a subject of some interest given the large volume of diagnostic and surveillance tests that have been developed in 2020.

However, another overarching and industry-wide draft guidance on the A list is that of computer software assurance (CSA) for manufacturing and quality systems software. We blogged previously about the controversies surrounding CSA, although it might be noted that the CSA question also appeared on the CDRH guidance agenda for the previous fiscal year, thus demonstrating a sustained interest on the FDA’s part.

The docket for the CDS draft still carries the 2017 draft as well as the follow-on draft posted in September 2019, but the 2019 version has its critics despite some meaningful upgrades. The CDS Coalition expressed its appreciation for the FDA’s transition to a risk-based approach in the 2019 draft, an approach the group said was absent from the 2017 edition.

Nonetheless, the CDS Coalition said the change in emphasis constituted “a very small step in this positive direction.” The Coalition recommended that the agency exempt any CDS that does nothing more than inform clinical management of the patient, assuming that the intended use is presumed to be of low impact on patient care. The Coalition also said the 2019 draft engages in a “rather convoluted argument” about the difference between software that drives clinical management and software that makes recommendations regarding diagnosis or treatment.

One of the more interesting entries on the A list for draft guidances is the medical device shortage draft guidance, the scope of which is limited to the COVID-19 pandemic and similar situations. The Coronavirus Aid, Relief, and Economic Security (CARES) Act of 2020 amended the Food, Drug and Cosmetic Act to empower the FDA to mandate that device makers advise the agency of any impending shortages. However, Section 506J of the CARES Act apparently carries no weight outside the confines of a public health emergency (PHE), and there is some question as to whether the FDA will be able to get this policy into draft and final form before the pandemic comes to an end.

There may be an argument for a broader device shortage policy, however, as demonstrated by the controversy over the use of ethylene oxide for device sterilization. The closures of several EtO device sterilization plants in 2019 was a source of device shortages in a scenario that did not fall within the definition of a PHE, a problem former acting FDA commissioner Ned Sharpless outlined in an October 2019 statement.

Device makers were generally credited with ably keeping the agency abreast of any shortages created by the crimp in sterilization capacity in 2019, but the statute gives the FDA the authority to mandate pharmaceutical shortage notifications in all conditions, not just during PHEs. This difference may prove rather conspicuous in the drafting of legislation to enact the next device user fee agreement.

FDA Slots 2017 Draft for Replacement Reagents on B List

Given the issues with shortages of supplies for testing during the COVID-19 pandemic, the fact that a final guidance for replacement reagents falls into the B category for final guidances might strike some observers as odd. The draft guidance was posted in December 2017, although only one organization saw fit to comment. AdvaMed Dx, the diagnostic arm of the Advanced Medical Technology Association (AdvaMed), applauded the draft’s emphasis on public health, but urged the FDA to provide a rapid turn-around for a final guidance.

Despite being generally supportive of the draft, AdvaMed Dx said it disagreed with the exclusion of point-of-care (POC) tests from the scope of the draft, a notion the FDA may have to revisit more closely due to the agency’s emphasis on POC testing during the pandemic. Of the 14 pages of the group’s response, 12 are used to detail a number of critical edits to the draft, such as instances in which AdvaMed Dx indicated that the language in a legacy guidance handled several matters adequately, and thus should be brought forward to the final.

Another entry on the B list for draft guidances is one for risk categorization for software as a medical device (SaMD), which may come across as anomalous given the formation of the FDA’s Digital Health Center of Excellence (DHCoE). In December 2017, the FDA posted an acknowledgement of the SaMD risk framework developed three years earlier by the International Medical Device Regulators Forum. Broadly speaking, the seeming lack of urgency on the FDA’s part regarding risk categorization would seem to work against the stated aims of the DHCoE, which is in part to aid in development of FDA policymaking for SaMD.

Beyond the concerns implied in the formation of the DHCoE, a number of draft and final guidances – along with some concerns about regulation of artificial intelligence (AI) and machine learning (ML) algorithms – rely substantially on a general CDRH policy about risk. This was the case in the remarks provided by the CDS Coalition for the CDS draft guidance, but the FDA itself acknowledged in its April 2019 statement that its approach to AI and ML will rely on principles enumerated by the IMDRF guidance for SaMD risk categorization. An April 2019 statement by then-FDA commissioner Scott Gottlieb likewise emphasizes the role of risk management in the agency’s approach to these algorithms, making the question of risk designation for SaMD a more important consideration than its placement on the guidance development agenda would seem to suggest.