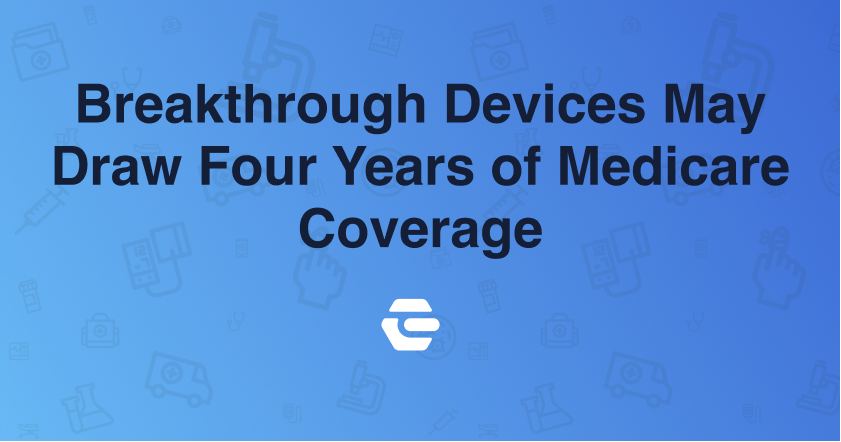 The FDA breakthrough devices program has been active since its inception, but the Centers for Medicare & Medicaid Services has floated a plan to cover these devices for four years upon clearance or approval. The news regarding coverage was cheered far and wide, but companies that wish to take advantage of the offer have a lot of homework to do to just get into the FDA program.

CMS announced the Medicare Coverage of Innovative Technology (MCIT) program Aug. 31, which if adopted would provide coverage starting on the day of the FDA’s authorization of the device. The term of coverage is calculated to give the manufacturer ample time to gather evidence that would be used to support coverage under conventional coverage mechanisms after the four years have passed.

The FDA has posted what amounts to a Q&A on the breakthrough devices program, which points out that the program replaces two other programs of similar intent, including the expedited access pathway. Class II and class III devices are all eligible, and developers can request entry for their device at any point prior to the regulatory filing (PMA, 510(k) or de novo petition).

The FDA will notify the submitter of any needs for additional information within 30 days of receipt of an application, and will advise the sponsor of the disposition of the application within 60 days. However, the agency made it clear that the sponsor must be responsive to requests for additional information. If the requested information is not provided promptly, the request for inclusion in the breakthrough devices program may be denied.

The FDA crafted a Dec. 18, 2018, guidance for the breakthrough devices program, which spells out some expectations, including that the interactions between the FDA and the sponsor should be thoroughly documented. Another feature of some interest is the prospect that the agency will decide to convene an advisory committee to review the application, although this has been invoked in few instances, if any.

The FDA review team will be able to readily access any additional agency expertise needed to process the application in a timely manner, but the FDA review teams are also regularly trained on the program. While breakthrough device applications will be placed at the front of the review queue, the agency advised that these applications often present complex engineering or medical scientific issues, and thus may not lend themselves to quick turn-around. Device-led combination products frequently run into this predicament as well, all of which are considerations that call for rapid responses from the sponsor when the FDA review team has questions.

Applicants to the program can alert the FDA of their interest by using the Q-submission filing mechanism, but the agency seems determined to allow only one active breakthrough device filing per company at any given time. The FAQ document states that a designation request should be the only request on docket for that company, although a sponsor or developer can file applications for the program serially.

To date, the successful applicants to the program run the gamut, from cardiology devices to artificial intelligence algorithms. The cardiology space seems appears to be well-explored terrain, however. Medtronic plc of Dublin touted its successful breakthrough application for the Intrepid device as a transcatheter tricuspid valve replacement (TTVR) for severe, symptomatic tricuspid regurgitation. Similar devices with indications for the aortic valve are already on the market in significant numbers, while mitral valve repair devices have also been available for some time.

Medtronic has also proposed the Intrepid as an investigational device for the mitral valve, while Edwards Lifesciences has won FDA approval for its Sapien 3 valve, originally approved for the aortic valve, as a fix for pulmonary valve disease. Thus, it would appear that all four of the heart’s major valves have been addressed, seeming to leave little available room for a breakthrough device designation in this space.

Conversely, the field of artificial intelligence broadly writ seems ripe for this program, and one example is the breakthrough device designation for an algorithm by AI Medical Service Inc., of Tokyo. AI Medical won a breakthrough designation in November 2019 for its algorithm for analysis of endoscopy images for potential diagnosis of gastric cancer. Paige.AI of New York won a designation in March 2019 for an algorithm to be applied to digital pathology, but the wide range of potential applications of artificial intelligence would seem to lend these algorithms readily to the breakthrough devices program.

More After Four: No Easy Options

The proposed Medicare coverage concept comes with a few price tags of its own, including that the developer or manufacturer will have to resort to conventional coverage paradigms once the four years have elapsed. The options for coverage after that term include:

It might be pointed out that this last option is rarely invoked, although the CMS recently proposed this as a method for coverage of total artificial hearts. The low volume of procedures for these devices along with the variability of the patient’s health status and expectations make this an exceptional rather than typical coverage policy proposition, however.

Perhaps of equal importance to the news about the MCIT program is that the CMS has proposed a definition for the term “reasonable and necessary.” The manufacturer or developer can invoke a stepwise process for meeting that requirement, but a simpler path may be to demonstrate that private payers are covering the device or service. So long as the sponsor can document that the population covered by private payers bears a strong clinical resemblance to the Medicare population, the definition of “reasonable and necessary” would be met. Regardless of how a sponsor goes about meeting the definition, this may ultimately prove to be the most far-reaching device-specific policy proposal put forth by the CMS since the advent of the NCD mechanism.